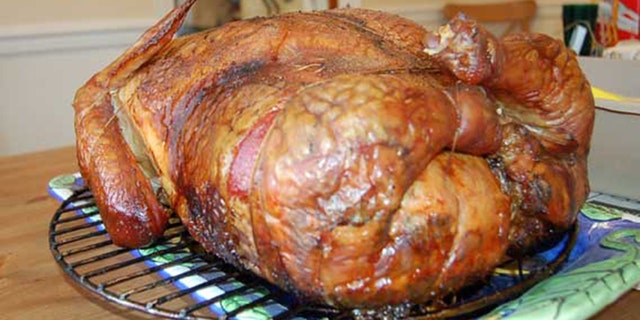 Why settle for just a turkey on Thanksgiving when you can add a chicken and duck, too?

A favorite of legendary football coach and sportscaster John Madden, read on for a look at what you need to know about the dish as well as tips for making it.

Who thought up the turducken? 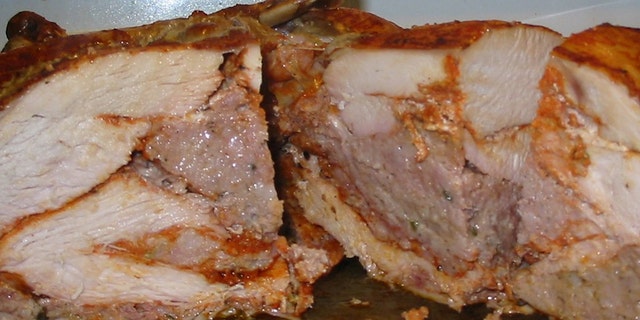 The turducken will take several hours to cook.
(Christopher Corkum)

There’s a lot of speculation over who should get the credit for the culinary masterpiece.

Sammy Hebert told Fox News an older man came into the butcher store shortly after it opened with a turkey, duck and chicken “that he wanted us to debone, clean and make some kind of concoction.” He said that’s when he created the turducken – the name he gave the dish right then and there.

“It makes me pretty proud of being the creator – it’s been going on for a long time. A lot of people tried to say they were the ones who started it, but none of them have the proof that I have,” Sammy Hebert said. “I take pride in it just because I know we did it.”

But then there’s also the late Louisiana-based Cajun Chef Paul Prudhomme, who ascribed to have invented the dish, according to various reports. He told The New York Times he invented the triple bird entrée in Wyoming and had the name and recipe patented in 1986, according to The Times-Picayune.

There has also been speculation that Corinne Dunbar’s, a Creole restaurant in New Orleans, is the originator of the birds, according to Delish. Food writer Amanda Hesser noted it could have originated on a South Carolina plantation.

What should I know about cooking it?

In Prudhomme’s 2007 “Always Cooking!” cookbook, he includes a recipe for turducken – which is also available online. The dish takes at least eight hours to cook and requires more than 30 ingredients. But the entrée does serve 24 to 30 people, according to his website.

For the dressing, Sammy Hebert recommended using pork stuffing and cornbread dressing. Others, such as a rice dressing, could dry out the dish since it takes so long to cook.

For those planning to debone the birds themselves, Sammy Hebert said the turkey will be the hardest. Hesser also recommended having a butcher do the deboning for you.

To start, Prudhomme’s recipe says to lay the turkey, skin down, on a sheet pan and season the meat. The leg and wing cavities should be packed with stuffing – but not too tightly or they could burst while it cooks, he warned. Stuffing should also be spread in an even layer over the rest of the exposed meat.

Next, the duck should be placed on top of the turkey, skin down, and seasoned. Stuffing should be spread throughout the duck, just as before.

Then the chicken should be placed, again skin down, on top of the duck. It, too, should be seasoned and filled with stuffing just as before.

Next, Prudhomme suggested rolling the chicken around the dressing into a chicken shape, using a skewer to hold it together if necessary. Then roll the duck around the chicken and pull the skewer out of the chicken if it was used. Then do the same thing with the turkey.

The next step can be a bit tricky.

“Invert [a] 15 x 11-inch baking pan and place it over the top of the Turducken. Pull out the skewer and press down so that the pan is firmly wedged on top of the bird. Enlist another person’s help to carefully turn the Turducken over so that it is sitting breast side up in the 15 x 11-inch pan,” Prudhomme instructs in his recipe.

Place aluminum foil over the openings of your turducken and over the wings. Then place it inside a bigger pan to catch the drippings.

Prudhomme’s recipe calls for the birds to be baked at 225 degrees for about 8 hours or until the center of the turducken is 165 degrees. It should be covered with aluminum foil after four hours.

Once the turducken has finished cooking, it should rest for one hour before it’s served, according to Prudhomme.

Prudhomme suggested using strong spatulas when transferring the birds to a platter and when serving the delicacy as the birds do not have bones for support.

“Be sure to make your slices crosswise so that each slice contains all three dressings and all three meats,” the recipe says.

If you don’t feel up to the challenge of making the dish yourself, multiple butchers are selling them throughout the holiday season. Hebert’s Specialty Meats, for example, will ship a turducken straight to your door, ranging in price from $75 to $95, depending on the size and stuffing.