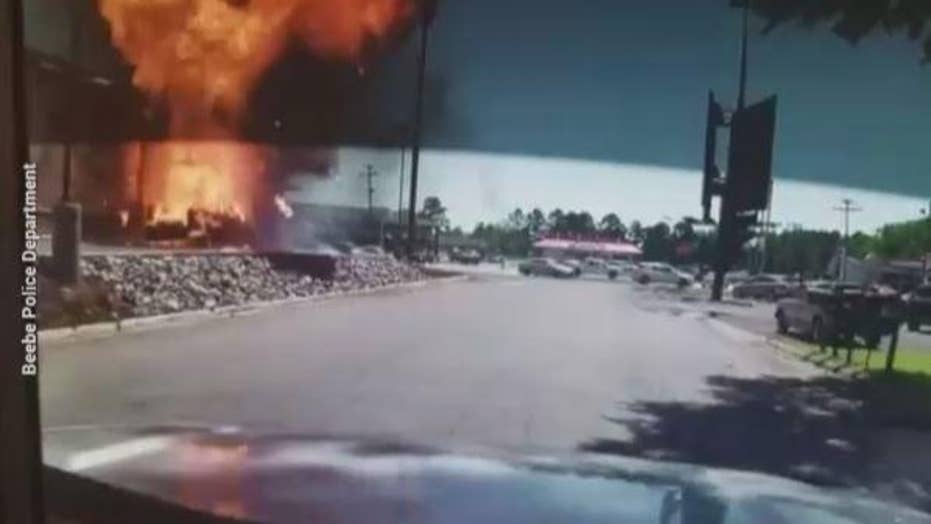 See video of a truck exploding at an Arkansas Burger King drive-thru, and hear what happened to the driver.

A sharp-eyed Burger King employee may have saved a customer from getting flame-grilled.

When a truck carrying a 100-pound propane tank pulled into the drive-thru of the Burger King in Beebe, Ark., one of the employees noticed that it was leaking gas. She notified the driver, who got out of his vehicle to check on the tank’s release valve. That’s when the truck burst into flames.

A nearby dashcam captured the scene on video, including the moment when the tank exploded, creating a massive fireball. Fortunately, the area had already been cleared by local authorities.

The driver of the truck, Ron Daniel, survived the incident but was sent to a nearby hospital with first-degree burns all over his body. He was released later that night.

In an interview with local news outlet KARK, he stated that he had just picked up the propane tank and was stopping by the restaurant to grab a few Whoppers. He also said that his truck was a “total loss” and that he felt bad for causing damage to the Burger King.

The Beebe Police Department released footage of the incident on their Facebook page, along with a following statement saying: “This afternoon at approximately 1:30 p.m. Beebe Police Officers and Firemen responded to a pickup on fire in the drive through lane of the Burger King Restaurant located at 2326 Center Street in Beebe.”

The note also stated that “the Beebe Fire Department responded and was quickly able to put the fire out. The outside and inside of business sustained damage.” It’s unclear when will the establishment reopen.