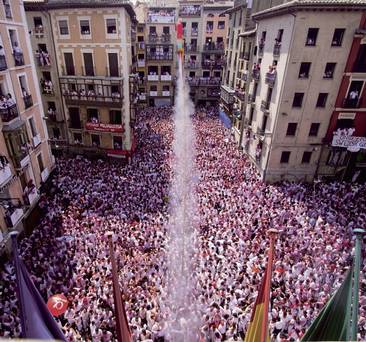 San Fermín is the legendary festival in Spain that celebrates bulls pounding through the cobbled streets each July. The fit, the brave and the not so sane crowd on to the narrow, medieval streets, dressed in white, and hold up their crimson red scarves waiting for the txupinazo to sound. It’s the rocket that signals the start of the fiesta. Above them, balconies are filled with spectators, waving red scarves from a safe distance, waiting for the spectacle to unfold below. This is Pamplona, the capital of the Kingdom of Navarra, a city that has been immortalised by Ernest Hemingway.

Tucked up in the north west of Spain, Navarra is 100km from San Sebastian and 400km from Madrid. It is a region that is famous for its fiesta, food and wine. As one of the most important kingdoms in the Iberian Peninsula, Navarra once stretched from Bordeaux to Barcelona, was the last to submit to the realm of Castilla and Aragón, and was integrated into greater Spain in 1512. It still remains fiercely independent and as an autonomous region it is allowed to set its own taxes, similar to the Basque country.

Wine was first made here by the Romans, who planted vines 2,000 years ago, and the remains of ancient clay pots, which were used for storing wine, can be seen at the archaeological site, Villa Romana de las Musas. It is close to Puente la Reina, ‘the crossroads of the ways’, a medieval town where the two main routes on the Camino de Santiago de Compostela converge, which contributed to the continuing importance of wine in the region. Pilgrims travelling along the route appreciated the refreshment of good quality wine, and with a revival in interest in the Camino, it seems not much has changed. Bodegas Irache, a winery along the route, has a wine fountain on one of its outside walls, so that pilgrims can serve themselves a free glass of red wine as they continue on their journey. Now that’s what I call hospitality.

With all of this history, it does seem surprising that we don’t know more about wines from Navarra, but to a certain extent, it has remained in the shadow of its more famous neighbour, Rioja. It is a significantly big region, extending 100km south from Pamplona, with altitude ranging from 300 to 750 metres, and is carved into five sub-regions by the River Ebro and its tributaries. With this, you get a range of weather and soils. When I visited last year, I was struck by the differences in the landscape. It’s cooler in the north, protected by mountains, with one of the biggest beech forests in Europe on the lower slopes before you get to the vineyards. Navarra is all about sustainability, so the wind that sweeps down from the mountains is harnessed and windmills dot the landscape, providing green energy for 50pc of the region. A 177km canal cuts through these hills, a hugely impressive irrigation project that channels water from the Irati River to the central and southern areas of Navarra, making it the vegetable basket of Spain and providing irrigation for vineyards. Then, as you move more inland it gets increasingly warmer, the soils become sandier and you hit the Bardenas Reales National Park, a 42,000 hectare stretch of semi-desert in the south east that was used as a location in Game of Thrones.

There is a diverse range of styles of wine in Navarra, and because the region is not as well-known as Rioja or Ribeiro del Duero, many of the bottles carry the name of the grape variety on the label. There are also plenty of blends, so you’d need to look at the back of the bottle to get more detail on them. But typically, the reds are similar to the blends of neighbouring Rioja, with Tempranillo, Garnacha (Grenache) and Merlot, and to a lesser extent Syrah and Graciano. For white wine, it’s mainly Chardonnay and Viura, and to a lesser extent Sauvignon Blanc.

You are probably familiar with Gran Feudo wines, and some of the wines it makes come from the Tierra Estella region, close to the Basque country in the northwest. As well as its excellent red Reserva, Gran Feudo also makes a good quality rosé. In the past, Navarra was most associated with rosés, which are typically deeper in colour than the pale pink rosés you get in Provence and are made from Garnacha. But this doesn’t mean that they are sweet. They are in fact bone dry with a good concentration of flavour, which makes them particularly good to have with food. I have two in the line-up today (see panel, below).

One of the wineries I visited, Ochoa, is based in the beautiful town of Olite. It is run by Javier Ochoa, but more recently his two daughters have become heavily involved in the business. Both have a considerable amount of experience and spent years working outside the family business. Adriana is a winemaker who studied oenology in Bordeaux and worked for Pichon Comtesse de Lalande in France, Torres in Spain and Yalumba in Australia; and Beatriz studied business in Navarra, Canada and Denmark, travelled extensively, and worked in the UK before heading back home. Although their father is chief winemaker, he is very open to new ideas, and one of the most important decisions they made was to go for organic accreditation. This has had a huge influence on the way they work.

As we headed out into the vineyards, which are mostly in the Ribera Alta sub-region of Navarra, Adriana pointed to a field on the right which she had planted with young olive trees. She had leased the land to provide a buffer zone around the vineyards as she was worried it may be planted with corn, a crop that typically is sprayed frequently with pesticides. Walking through the vines, I could see how healthy they were.

In the spring, the ground between the vines is covered in red poppies; and as it was early autumn when I was there, the ground cover had dried out and there were hundreds of tiny white snails’ shells scattered on the ground. I’ve never seen anything like it. A graveyard of minute snails, but there was nothing ominous about them. They had existed quite happily alongside the vines, doing no damage at all, and it was just a case of the circle of life.

Far greater threats exist from the local root-eating moles who are more than happy to munch their way through the vines, but Kestrel boxes are set up around the vineyards to attract birds of prey who hunt them down. And there are also beehives in the vineyard to help with pollination. In case this all sounds wonderfully idyllic, it is not all plain sailing. Sometimes there are problems that cannot be dealt with through organic means, and a recent attack on the vines by a bug that damages the wood and affects the flow of sap, had meant that the only solution for Adriana was to grub up (remove) all of the diseased vines.

Although most of their vineyards are located within 30 minutes of their winery, there are quite a few different soil types, with the vineyards which are higher up being considerably stonier. This means that they grow a range of varietals, and their wines range from white, rosé and red to a delicious dessert wine, which is a bit of a pet project. Their winery, which is open to the public, is impressive and it is very interesting to taste the different wines, including the newer series being made by Adrianna. A classic Navarra rosé which is bone dry with a good intensity of fresh fruit flavours; ripe strawberries and raspberries combine for a refreshing tipple. Crisp and refreshing, this rosé is packed full of summer flavours, with freshly picked raspberries, strawberries and a touch of ripe cherries.

A Tempranillo blend that will appeal to Rioja lovers, this organic wine from Ochoa has a perfumed nose with generous flavours of mature cherry, blackberry and a soft touch of spice.

From a winery run by three young winemakers, this juicy Garnacha allows its ripe flavours of lush cherries, loganberries and pomegranate to show through with the faintest hit of spicy oak. Suitable for vegans, this unoaked blend of Merlot and Tempranillo is unfiltered and has layers of juicy dark fruit with flavours of dark berries, damsons, and a savoury balance. Made from a blend of Cabernet Sauvignon, Graciano, Tempranillo and Garnacha, layers of red and black fruit, and a touch of cocoa and vanilla give a fullness to this wine which would go perfectly with roasted meat and stews.