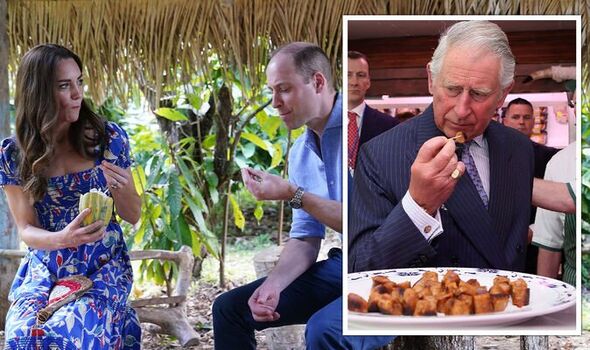 Queen Elizabeth decides on the important rules royals must follow when they are at public events and members of the Royal Family are reportedly banned from eating shellfish, crab legs, and foie gras.

The Royal Family is not allowed to eat shellfish, due to its food-poisoning risk, especially when travelling.

Former butler Grant Harold explained: “It is a very sensible move to abandon having seafood when out and about on public duties.

“We don’t want a member of the Royal Family having a serious reaction to food poisoning.

“Especially if she is on an overseas tour.”

However, it is rumoured that Prince William really likes sushi and Prince Charles broke this rule once as he had seafood during an official trip.

Other foods like foie gras and crab legs are considered too “risky” for the royals, former royal chef Darren McGrady explained.

Crab legs in particular are not the easiest food to eat so royals try to avoid consuming them during public appearances when pictures are being taken.

According to People for the Ethical Treatment of Animals’ website, Prince Charles also banned foie gras in 2008, over concerns for animal welfare.

The Queen reportedly dislikes oysters and refuses to eat the popular delicacy.

According to former royal servant Charles Oliver, the Queen and the late Prince Phillip hated oysters.

He explained: “Inevitably there are one or two things the Queen and her husband do not like, and the hosts are duly warned in advance

“The Palace instruction states only: ‘Neither the Queen nor the Duke of Edinburgh like oysters.”

Former royal staff have previously said the Queen also hates garlic and the ingredient is banned in the Palace.

Royal chef Darren McGrady explained: “We can never serve anything with garlic or too much onions.”

“I suppose, in case you get the royal burp.”

It is reported Prince George’s favourite dish is pasta.

Princess Charlotte, on the other hand, is a fan of green olives.