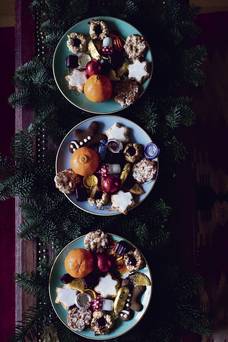 Drawing on the classics taught to her by her German mum and grandparents, cook Anja Dunk shares her recipes for Adventgebäck (biscuits for Advent) that will make a Christmas Eve Bunter Teller — a colourful plate piled high with sweet treats.

This recipe calls for a mixture of ground hazelnuts and almonds, but you can use almonds only. If you are put off by the long list of spices, you can take a shortcut and just use 1 teaspoon of ground cinnamon and 1 teaspoon of ground ginger instead. Because they are butterless, it means they keep well stored in an airtight tin.

Makes about 45 biscuits. You will need two baking trays.

For the biscuits: 2 eggs

Grated zest of 1 unwaxed lemon (juice reserved for the icing)

For the chocolate glaze: 75g dark chocolate, broken into squares (I prefer 70pc cocoa solids, but you can use any chocolate you like here, milk even)

1. In a large bowl, beat the eggs and sugar together with an electric whisk for about 5 minutes, until light and fluffy. Heat the honey in a saucepan for a minute so that it becomes more viscous. Add the remaining ingredients, apart from the Oblaten, to the eggs and sugar, pouring the honey in last. Mix everything together until a mixture the consistency of a stiff cake batter is formed. Transfer to a tub, cover with clingfilm and refrigerate for 8 hours or overnight.

3. Divide the Oblaten between two baking trays (the biscuits shouldn’t run, but it’s a good idea to line the trays with some non-stick baking parchment anyway). Spoon heaped teaspoons of the biscuit mixture on to each rice paper round and press down gently so the mixture spreads almost to the edges. Bake in the centre of the oven for around 20 minutes, until just golden on top.

4. While the Lebkuchen are baking, mix the icing sugar with the boiling water and lemon juice to create a runny glaze. If it’s too stiff, add a drop more water – I always find it hard to give exact quantities for icing.

5. Once golden, remove the biscuits from the oven and paint with the glaze immediately. Allow to cool on the tray, then store in an airtight tin.

6. If you choose to cover some of the biscuits with chocolate, do this once they are fully cool.

7. Pour 1cm of water into a saucepan and place on the hob over a medium heat. Put a large heatproof bowl on top of the saucepan, and put the chocolate and the coconut oil into the bowl. Do not stir – be patient, and wait for the chocolate to melt, which normally takes around 5 minutes. Once the chocolate has melted, take the bowl off the heat and stir the chocolate vigorously to incorporate the coconut oil. Using a pastry brush, paint a thin layer of the chocolate mixture on to each biscuit. Wait for it to set before boxing up.

These keep well stored in an airtight container for up to 5 weeks.

Rice paper rounds can be ordered from germandeli.co.uk. If you can’t get hold of them, though, you can use a sheet of filo pastry cut into circles with a cookie cutter instead.

If you don’t have any mixed peel in the house but like me have many jars of marmalade, you can substitute 100g of marmalade (chopped finely) for the mixed peel and leave out the honey in the recipe – it’s not to everyone’s taste but I quite like the bitterness marmalade adds.

Zimtsterne are to Germans like mince pies are to the Irish – a fundamental part of festivities – and no Christmas would be complete without them.

Now there are two ways of making these: one is where you make a meringue base and add ground almonds to it; you then spoon plain meringue on to the biscuits, air-dry them overnight and bake them the next day. Then there is this version – the cheat’s version, I suppose – where you don’t make a meringue base but put marzipan in the biscuits to keep them moist and chewy inside instead. I love marzipan beyond most things, so of course there is no contest here for me in the taste stakes. Also, this version is a lot easier to make.

For the biscuit dough: 500g marzipan, grated (I use shop-bought)

175g icing sugar, plus extra for dusting the work surface and rolling

For the icing: 2 egg whites

A spritz of lemon juice

2. Put all the dough ingredients into a large mixing bowl, using your hands to bring them together until a sticky dough of even consistency is formed. You can be quite forceful with it – I tend to squeeze it in my fists. The dough will be quite sticky.

3. Sift a good amount of icing sugar on to a work surface. Place the dough on top, sift some more icing sugar over it, and roll it out to 5mm thick. Because the mix is very sticky, you will need more icing sugar sifted over each time you roll, to prevent it sticking to the rolling pin. Cut out little star shapes using a cookie cutter and lay them on the lined trays, leaving a gap of about 1cm between them as they spread a little.

4. Bake in the oven for 15 minutes. They will be golden on top but still very soft to the touch when you take them out. They will firm up a little once cooled, so don’t be tempted to leave them in the oven any longer, as you want them to be soft and chewy inside. Allow them to cool fully on the tray, then transfer to a wire rack.

5. Whisk the egg whites until stiff peaks form. Sift in the icing sugar, squeeze in a few drops of lemon juice and stir vigorously until a stiff paste is formed.

6. Ice each star with a small knife, or even the tail end of a spoon, starting from the centre and pulling the icing carefully into each pointed end. The icing needs to set solid, which takes about 8 hours, so I always ice in the evening, leaving the biscuits on the kitchen table to air-dry overnight.

These keep well stored in airtight containers for up to 6 weeks.

As a girl, my weekly pocket money was one Deutschmark, and it would get me a dark chocolate Florentine every week over the summer – there was, I thought, no better way to spend it. My brother, on the other hand, saved his money week on week until he had amassed enough to buy a toy at the end of the holidays. Everyone praised his grown-up approach and looked pitilessly upon me for my frivolity, to which I would smile defiantly, safe in the knowledge that a Florentine, albeit gobbled and gone in seconds, was the better choice.

These aren’t the cherry-studded butter-and-cream-rich Florentines of my childhood – truth be told, I find that sort a little tricky to make. Somehow they never seem to work out quite right, or maybe, probably, it is that nothing will ever live up to the memory.

These Florentines are made on the hob, not in the oven – far easier, I think, and it also eliminates the risk of the mixture spreading all over a baking tray.

To cover (optional): 75g dark chocolate (I use 70pc cocoa solids, but it’s personal preference, you can even use milk chocolate if you prefer)

1. Dry-toast the almonds in a large, non-stick frying pan for about 5 minutes, until golden brown, shaking from time to time to avoid burning. Tip them on to a plate and set aside.

2. Have ready a sheet of non-stick baking paper. Put the sugar, butter and marmalade into a saucepan and heat until bubbling, stirring all the time to dissolve the sugar granules and prevent sticking. Allow the mixture to bubble over a medium heat for 6 minutes, stirring once or twice. Tip in the almonds and orange zest, stir so they are all coated in the sugar mixture, then bubble for a further minute.

3. Take off the heat and, using a tablespoon, spoon dollops of the mixture on to the baking paper. Grease the back of another spoon with a little butter to prevent the hot caramel from sticking, and flatten the dollops down. Allow to cool completely, then store in an airtight tin.

4. If you choose to paint the bases with chocolate you will need to melt the chocolate with the coconut oil in a heatproof bowl over a saucepan of simmering water. Once the chocolate has melted, tum the heat off and stir vigorously to mix in the coconut oil. Turn the cooled Florentines over, and, using a pastry brush, paint the melted chocolate on to the bases. Allow to set, then store in an airtight tin, where they will keep for about 5 days.

Extractedf rom Strudel, Noodles and Dumplings: The New Taste of German Cooking by Anja Dunk, published by Forth Estate at £26. Photography by Anja Dunk