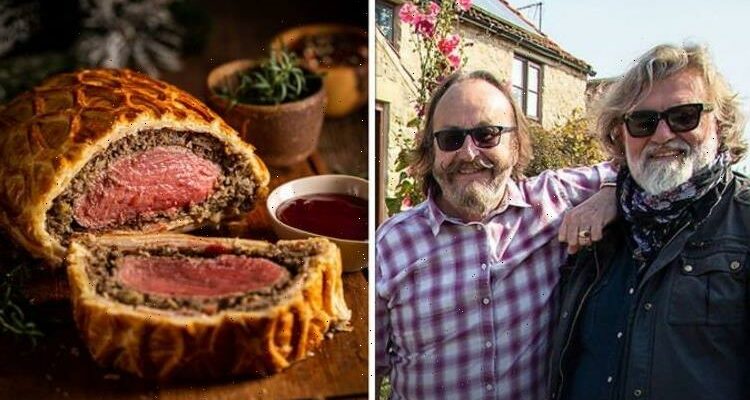 While riding the coast of England, Si King and Dave Myers stop at a pig farm and decide to make a delicious Pork Wellington afterwards. How did they make it?

The pair decided to make a Margaritza Pork Wellington with sage and white pudding centre, as they visited the Margaritza pig farm earlier that day.

Si starts by placing the meat on a surface and trimming the end off. “I’m going to use that little piece as plugs in the end,” he explained.

For the stuffing, Dave used the Margaritza white pudding. “I’ll crumble this. I’m not sure how much to use but I think with the stuffing, it’s how much you can get in it really.”

Si then tenderised the pork to break down the meat fibres making it easier to roll, cut and eat.

He then added a chopped apple to the mix as the sweetness will balance the savouriness of the white pudding. “Of course, pork and apple is like me and you, inseparable, indivisible,” Dave commented.

He then added bread crumbs and an egg and smooshed them together before laying neatly along the centre of the pork loin. “It’s important not to overstuff it,” he explained.

“You need to give it some room. And that’s a mistake people make because they get excited because of the stuffing that they made.”

“I made too much stuffing”, Dave admitted.

“You can always fry it off,” Sid suggested. “Fry it off for breakfast and have an egg on top.”

For the onion jammy layer betwixt meat and pastry, he started by adding a big bit of fat or butter to the pan. He then added the bits he cut before to form a plug.

He then proceeded to roll the fillet “nice and tight.” Trussing the roll keeps it tight and stops it from unravelling when you sear it. “Look at that, lovely!”

“It’s just great because searing meat just holds all the moisture in. It doesn’t leak because of that caramelisation on the outside of the meat,” Sid explained.

“It’s so important and it’s a step often people forget to do.”

Then he wrapped the seared loin tightly and leave to cool, and fried the chopped onions with a splash of strong cider.

“Let it boil until you have a cidery onion jam.”

They recommended rolling out one block of puff pastry and laying the bacon on top to form a barrier so the meat juices don’t saturate the pastry.

“Next we need a nice, even layer of our cider onion jam. That, my friend, is perfection!” Sid said.

After, roll from the top over, adding first a bit of eggy glue to then roll it out very carefully. Sid then made a little steam hole.

For good results, you should chill your welly first.