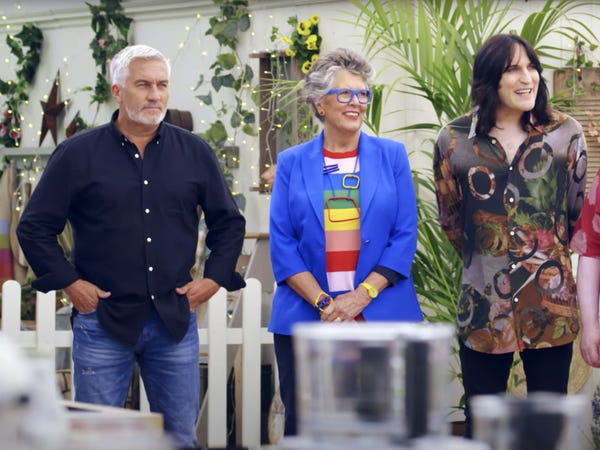 "The Great British Bake Off" has been a foodie favorite since it first appeared on TV screens in the UK in 2010. But if you're watching the show on Netflix in the US, you might notice a slight variation on the name — in America, it's listed as "The Great British Baking Show."

Interestingly, the difference has to do with yet another baking mainstay— the Pillsbury Company.

Pillsbury, a General Mills-owned American company that makes baking products, has owned the trademark for the term "bake-off" in the US as it relates to cooking competitions for several decades, per records on the United States Patent and Trademark Office. The company also owns the more specific "Pillsbury bake-off."

Madhulika Sikka, the public editor at PBS, the network that originally aired the show in the US, wrote in 2017 that to celebrate Pillsbury's 80th anniversary in 1949, the company announced a "bake-off" competition, which would judge goods baked with Pillsbury dough and award the winner a $25,000 prize.

Pillsbury's competition had a 60-year headstart on the televised baking show, which has gone by "The Great British Baking Show," not "Bake Off," in the US since 2017.

That's not the only shake-up "GBBO" has faced. The previous year, in 2016, the show moved from the BBC to Channel 4 because of differing opinions about the show's monetary value between the studio and the network, according to the Guardian.

Popular judge Mary Berry quit the series in September 2016 before the show's switch to Channel 4 and was replaced by Prue Leith in subsequent seasons.

Despite leaving the show, Berry continues to be a favorite with a few surprisingly famous fans — like Kate Middleton and her toddler son, Louis. The Duchess of Cambridge shared in December that one of Louis' first words was "Mary" because of his mother's impressive collection of Berry's cookbooks.

Differences in nomenclature aside, the beloved baking competition show is exactly the same on either side of the pond: Amateur bakers compete in three rounds to impressed judges Perkins and Paul Hollywood with their skills. One person is crowned star baker each week, while another packs their bags to go home.

The show is currently airing its eleventh installment, with episodes available to stream on Netflix three days after they've aired in the UK on Channel 4.