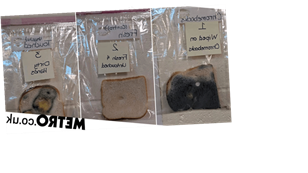 Teacher Jaralee Annice Metcalf was fed up with always being sick.

Although bugs spreading through her class was inevitable, she wanted to show the kids that they need to take measures to kill germs.

To explain why they need to wash their hands more often, she did a simple experiment with some bread.

The class, in Idaho, U.S., took five slices from a loaf and some ziplock bags.

The first wasn’t touched by bare hands and placed immediately in the ziplock bag. It was labelled ‘fresh and untouched’.

For the next one, every child washed their hands with soap and water and the slice was touched by the whole class.

For the third, they cleaned their hands with hand sanitiser and again, the whole class touched it.

Another was lifted using unwashed hands and the final slice was rubbed on the laptops they use in class. Jaralee said that they regularly clean their laptops with wipes but didn’t before this experiment to show how germs can build up.

Each one was labelled with a post-it note and left for about three weeks.

The results showed that the untouched bread and slice that was lifted with hands that had been washed with soap and water had barely changed.

The slice that was lifted using hands washed with hand sanitiser had a patch of mould on one side.

The slice touched with dirty hands had blue and yellow mould across the middle, but the worst slice was the one that was wiped on the students’ computers.

The piece is almost completely covered in dark blue mould.

Jaralee posted the results of the experiment on Facebook to tell parents to remind their kids to wash their hands properly with soap and water.

She said: ‘We did a science project in class this last month as flu season was starting.

People loved the idea and said they wanted to show their own kids to help them understand why they need to keep their hands clean.

One said: ‘I want to show this post to everyone that thinks hand sanitizer is better than soap!!!’

Another added: ‘Yuck! But goes to show you that good olde fashioned soap and water is the way to go!’