Starbucks to adapt to coronavirus by creating ‘walk-thru’ stores

Nick Setyan of Wedbush Securities provides insight into the future of Starbucks and the company’s growth.

The coffee giant is launching a “Borrow A Cup” program letting customers order their java in a reusable cup for a $1 deposit after having to suspend its bring-your-own cup policy during the pandemic, the chain announced Tuesday. 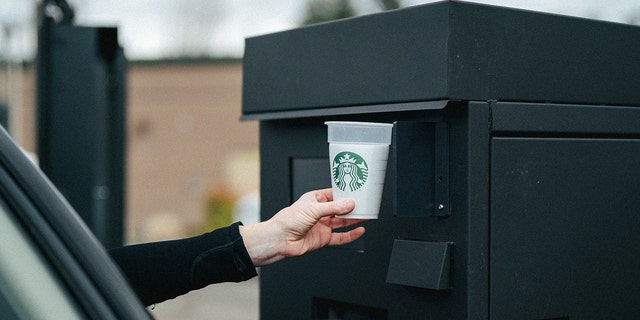 Starbucks is testing a  "Borrow A Cup" program with reusable cups that will be sanitized upon return. (Starbucks)

The two-month program will run at five stores in Seattle through May 31 letting customers order a hot or cold beverage in a reusable cup. Once they finish, customers can scan back cups at one of the participating shop’s contactless return kiosks and a  $1 credit and 10 Bonus Stars will be awarded via Starbucks Rewards account to anyone who returns the cups.

STARBUCKS DRINKERS CAN NOW PAY FOR COFFEE WITH BITCOIN

Starbucks discontinued its policy allowing customers to bring their own cups into coffee shops early on into the COVID-19 pandemic last year to curb the spread of the virus. Customers are still not allowed to bring their own cups into stores. The chain instead partnered with GO Box to pick up used cups to clean and sanitize them in less than 48 hours through its own “Borrow A Cup” initiative.

The chain says one reusable cup replaces 30 disposable ones, explaining the effort is part of its ongoing plan to cut waste by 50% by 2030.

Starbucks says it’s also partnering with Seattle-based Ridwell, a company that will collect reusable and hard-to-recycle goods from people’s homes making it easier to reduce waste.