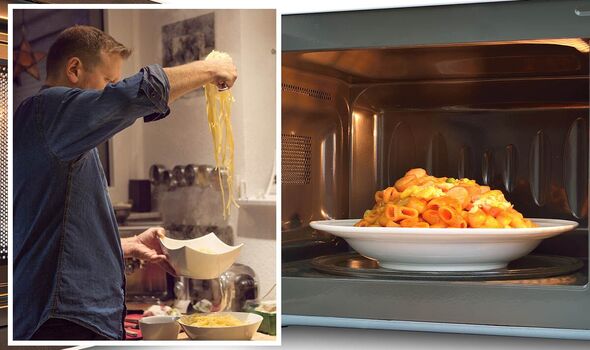 Cooking pasta on the hob is the go-to method for most people but as one chef discovered, it can be done in a microwave too. Whether you’re unable to access a stove or simply want to try a less traditional method to make your dried pasta dish, it is incredibly easy to do in less than 15 minutes. And you don’t even need to boil the kettle beforehand.

While you may not have considered it, cooking pasta in the microwave has several benefits, one of them being that the appliance itself is “far more energy efficient” than the stove according to an expert at uSwitch.

They said: “Not only do microwaves use less energy (typically no more than 1,500 watts), they’re far more efficient as they only heat the food itself rather than waste energy heating the air around them. There’s also no warming-up time – microwaves reach temperature virtually instantaneously, and food takes far less time to cook.”

What’s more, it is also incredibly straightforward to do – even more so than on the hob, as Liana, founder of Liana’s Kitchen discovered. She explained that as a self-confessed kitchen “gadget geek”, she was surprised by the results of the cooking method.

On her cooking blog, she wrote: “After my initial dismissal of using a microwave for cooking something that really doesn’t take long to cook the ‘traditional way’, I realised that actually there are valid reasons to make pasta in a microwave vs a saucepan.”

How to cook pasta in the microwave

Start by portioning out one portion of dried pasta into a microwaveable bowl and completely cover it with cold water, leaving some room for the water to fill up while cooking.

While trying the cooking hack, Liana used fusilli pasta though it should work with almost any shape. However, you will need to break up spaghetti, linguine, pappardelle and tagliatelle into smaller sections to ensure they cook through.

Liana said: “You can alternatively use boiling water, either from the kettle or by boiling it in the microwave first. Personally, I find it much easier to just use cold water and I find it doesn’t change the taste or texture.”

When it comes to cooking the pasta, the exact timings will depend on the recommended figure stated on the packet. According to the food blogger, an easy way to determine this is to add three minutes to the suggested duration.

“The exception to this is if you have already boiled the water, then you can just cook it for the time stated on the packet.”

Once cooked, carefully remove the pasta from the microwave and use a colander to drain the water away.

Liana suggested topping your quick pasta with your favourite sauce – which can also be heated up in the microwave.

It is important to note that this cooking technique is designed for smaller portions – around one or two servings. For times when you are making more than this, it might take a little longer to cook.

Liana said: “Just check that the pasta is cooked through before draining the water like you would on the hob. If it needs further cook time, just pop it back in the microwave, checking on it every minute.

“I wouldn’t recommend trying to cook too much pasta at the same time as it can clump together and not cook through properly.”

The food blogger noted that although it was not so “traditional”, using the microwave to cook pasta was “a great simple alternative” for when you “don’t have any other options”.

If you have enough leftovers, these of course can be reheated in the microwave when you want to use them up.

Once cooled, cooked pasta should be stored in an airtight container in the refrigerator and eaten within two days. An expert at Barilla said: “Pasta that has been cooked but has not been mixed with sauce should be tossed with extra-virgin olive oil prior to being stored to avoid clumping.”

Alternatively, you can coat unseasoned pasta in a little water before placing it back in the microwave, though butter would also work.

Place on a microwave safe dish and cover before reheating for one to two minutes on full power.