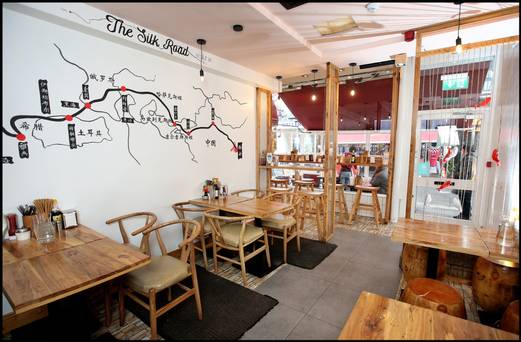 I see that Gordon Ramsay is in trouble again, not for shouting or general obnoxiousness this time (quelle surprise), but for opening an ‘authentic’ Asian restaurant in London. Wouldn’t you have thought that he would know (or been advised – did he not hear about Jamie Oliver and the jerk chicken?) that it’s not acceptable to purport to be authentic when one is plundering a cuisine not one’s own? Cultural (mis-) appropriation is as hot a topic in food as it is any other sphere and anyway, who’s to say what is and is not authentic when even we Irish, with barely a food culture to call our own, can’t agree about what goes into an ‘authentic’ Irish stew, as UK food writer Felicity Cloake discovered when she researched the topic for her ‘The Perfect’ column in The Guardian.

Anyway, that’s a roundabout way of saying that I’m not judging the food that we ate at Xi’an Street Food one afternoon last week on the basis of whether or not it is authentic, but rather on whether or not we found it tasty and enjoyable. (And the answer is partly ‘yes’. And partly ‘no’.)

I understand there’s a branch of Xi’an in Galway that’s a student favourite, and when the Dublin restaurant opened last year, we ordered a couple of times on Deliveroo. We were not overly impressed, but the problem may have been more with the length of time that it took to get to us than the inherent quality of the food, or lack thereof.

Part of my disappointment with what was decanted from the insulated delivery box was that it did not hold a candle to the food that I’d eaten in New York at the phenomenally successful Xi’an Famous Foods – named for the first capital of China, the home of the terracotta warriors – which has several branches in the city. The menus of Xi’an Dublin and Xi’an New York have many items in common, but the two businesses are not connected.

A social media post by my friend, Katia Valadeau – who blogs at properfood.ie and is a one-woman champion of small Irish producers and independent restaurateurs and retailers – of her lunchtime roujiamo burger, was the impetus for an ‘in person’ visit to Xi’an. And the food was substantially better that the take-out version.

Burgers are not something that I associate with Chinese food, but this one looked fantastic, the lamb encased in a flaky, paratha-like bread. In real life, the contrast between the strong-flavoured, spiced, tender meat and the crunchy, slightly greasy bread is delicious; made even better with the addition of a piquant chilli sauce. Apparently, roujiamo are a popular form of street food all over China.

Pork dumplings are crisp, chewy rather than soft, with a vibrant dipping sauce, while dry-fried French beans with pork mince are salty, spicy – and “the best thing on the menu” according to my son, who’s a regular. (He’s not a fan of the lamb burger, finding the full-on flavour of the meat de trop.)

The house speciality of biang biang noodles – we went for the duck version – is moderately spicy, but the hand-pulled noodles are stodgy rather than slippery; there’s a generous amount of duck, which we mined, but I doubt that anyone ever gets through all of the noodles.

Our final dish, aubergine in a hot garlic sauce, is greasy, disconcertingly sweet and neither hot nor garlicy enough.

Xi’an’s menu states that its food is MSG-free (hip hip!), its beef is 100pc Irish and that its chicken and beef are Halal. At the time of going to press, a query regarding the origin of its pork, lamb and chicken had gone unanswered.

There’s always a queue outside Xi’an and I can understand why. The food is cheap, the portions are huge and some of it is pretty damn tasty. I’d go back for the burger and cheap and cheerful ambience.

The roujiamo burgers are substantial; €7 will get you the pork, beef, chicken or veggie version, or €8 with chips or a soft drink.

Pan-fried dumplings and biang biang noodles with lamb for two, and a bottle of house wine, will cost €57 before service.

Xi’an is a buzzy spot.