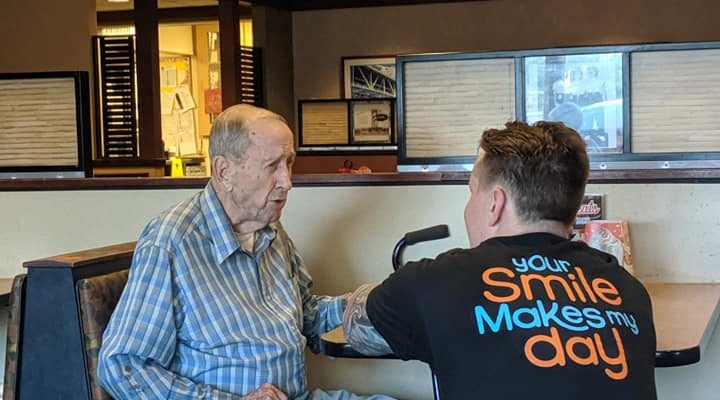 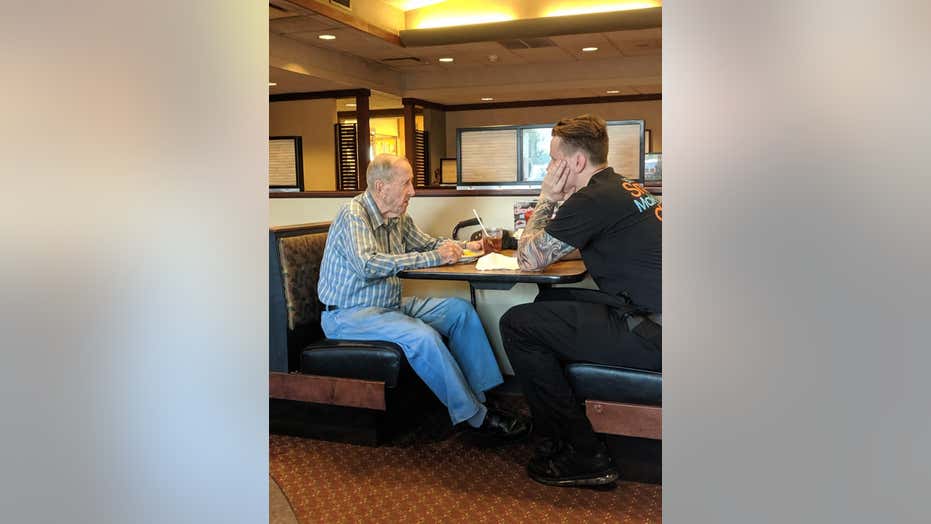 A restaurant server shared a heartwarming moment with a 91-year-old WWII veteran that has gone viral on social media.

Customer Lisa Meilander was dining with her family at Eat’n Park diner in Belle Vernon, Penn., when she spotted an elderly man seated alone in a nearby booth.

Meilander, a preschool teacher, said at first her family “really didn’t see him come in,” but took notice when their waiter, Dylan Tetil, 24, got down on one knee to talk to the man “eye-to-eye.”

“The man apologized for not hearing too well. He had forgotten to put in his hearing aids. He talked about how he lost his hearing during his time in the war. He was 91 years old with many stories to tell. Dylan patiently listened giving him his full attention,” Meilander wrote on Facebook, along with photos of the touching moment the men shared. 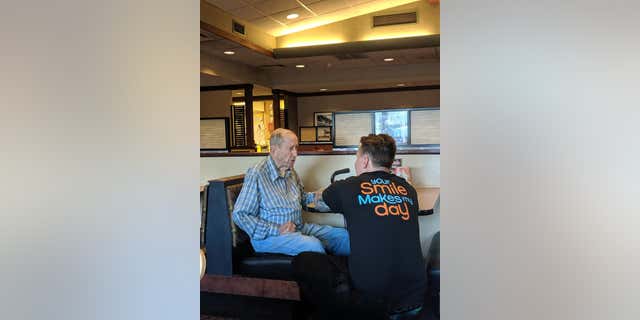 Lisa Meilander said at first her family didn’t see the older man come in, but took notice when their waiter, Dylan Tetil, 24, got down on one knee to talk to the man “eye-to-eye.”
(Lisa Meilander)

The veteran reportedly told Tetil he was “alone now” and doesn’t “often have someone to talk to.”

The server went on to help the man order – he reportedly wanted chicken – but as soon as Tetil left to put the order in, the man asked him to come back.

“I could tell as soon as I went up to him that he was eager to talk,” Tetil told Trib Live. “I brought him out his water, and he was like, ‘Please come back,’ and I said, ‘You know I will.’"

Meilander was so moved by the display that she wanted to offer to pay for the man’s dinner, but someone else in the restaurant had already taken care of it.

“I guess we weren’t the only ones eavesdropping on the conversation,” she wrote on Facebook. 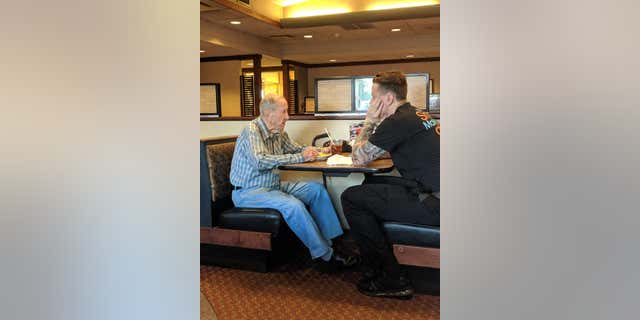 Tetil went on to help the man order – he reportedly told Tetil he wanted chicken – but as soon as Tetil left to put the order in, the man asked him to come back. Tetil did just that and shared his break with the man, listening to stories.
(Lisa Meilander)

Though Tetil’s compassion did not end there – Meilander shared that the man delivered the veteran’s food and then asked to sit with him on his break.

“As we left the restaurant the two of them were conversing and many people seated nearby were smiling. It was a touching sight,” she wrote.

The sweet moment was praised widely on social media. Meilander said in a comment to Fox News she was shocked by how far the story has spread.

"I am totally blown away by the response to this post! I am glad it has touched so many and hope that much good comes as a result of it. My expectation was that people in the local area would be encouraged by this young man's compassion. Never did I expect it to catch fire and spread like it did," she said.

The photos Meilander posted had more than 230K reactions as of Wednesday morning.

“Hope someone left Dylan a good tip!” another commented.

“Wish there were more people out there like him,” another person shared.

Tetil did not immediately respond to Fox News’ request for comment.