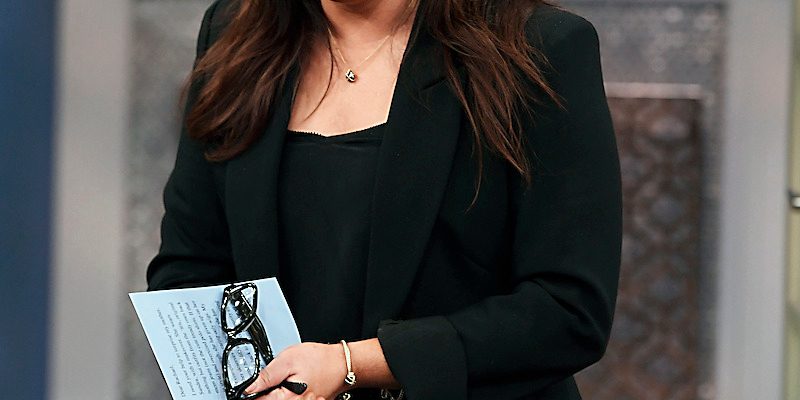 If you’re hosting Thanksgiving and actually want to spend some time with your family outside the kitchen this year (no judgements if you don’t), consider taking a few pointers from the queen of quick meals, Rachael Ray.

The talk show host put together a 60-minute dinner for the holiday on Thursday’s episode of the Rachael Ray Show. The menu is made up of Maple-Rosemary Turkey Breasts, Lemon-Garlic Mashed Cauliflower or Potatoes, Sautéed Kale or Spinach with Dates and Nuts, No-Fail Gravy, 2-Ingredient Cranberry Sauce and a Pumpkin Pie Spiced Dutch Baby With Pears & Sticky Maple Nuts.

The biggest time saver Ray shares is for the main event: the turkey. Instead of cooking a full bird, the Food Network star suggests making it the way that turkey is usually prepared in restaurant kitchens.

“We make turkey in pieces, whole pieces of breasts and legs and drummers[…]so that we can cook up as many of those parts as we need,” she says.

Her recipe calls for two (2 lb.) turkey breasts cooked in a cast iron skillet and covered in a buttery mustard-maple syrup glaze. The dish, which serves about eight people but could easily be doubled to serve more, only roasts in the oven for a total of 40 minutes, instead of the sometimes days-long endeavor it takes to thaw, brine and roast a full turkey.

Ray’s culinary producer Grant Melton, who shares the Dutch baby recipe, also saves you time when it comes to dessert. No more fussing with homemade pie dough that cracks and falls apart (ask your guests to bring a pie if you can’t imagine the day without it). Not only does the sweet treat—which is essentially a giant pancake covered in delicious toppings—come together quickly, but it can also be prepped in advance so you’re not scrambling the day of.

RELATED: All of the Cooking Safety Hazards That Can Happen on Thanksgiving—and How to Avoid Them

“Make the batter and sautéed pears ahead of time and assemble them in the hot cast-iron skillet just before baking,” he says. “Bring both ingredients to room temperature before using.”

Get the recipe for both the turkey breasts and the Dutch baby below, and visit RachaelRayShow.com for the full menu.

1. Preheat oven to 375˚F.
2. Pat the turkey breasts dry and season liberally all over with salt and coarse black pepper.
3. Place turkey breasts in a large cast-iron skillet or medium roaster pan. Melt the butter in a small skillet or saucepot and whisk in the syrup and mustard, add the rosemary and stock and spoon the sauce evenly over the breasts.
4. Roast turkey 20 minutes, baste with pan drippings and roast 20-25 minutes more to 160-165˚F. Remove turkey to carving board to rest a few minutes. Reserve the sauce and drippings in the cast-iron pan.
5. Carve turkey, arrange on platter and top with jus.
Serves: 4 to 6

1. Preheat oven to 425˚F. Place a 10-inch cast-iron skillet in the oven as it heats.
2. Once the oven and skillet are hot, melt 1 tablespoon butter over high heat in a small nonstick pan. Add pears and sprinkle with 1 tablespoon sugar, tossing to coat. Let cook while you prepare the batter.
3. In a medium glass mixing bowl, combine 2 tablespoons butter with the milk and microwave until butter has melted, about 1 minute. Whisk in eggs. Once combined, whisk in flour, the remaining 1 tablespoon sugar, pumpkin pie spice and salt.
4. Once batter is smooth, remove the hot cast-iron skillet from the oven and add 1 tablespoon butter, swirling it around to coat the pan. Immediately add the batter; it should begin to bubble around the sides. Working quickly, add the sautéed pears to the middle of the batter and return the skillet to the oven. Bake for 20 minutes or until sides are browned and puffy.
5. While the dutch baby bakes, heat the maple syrup in a small saucepan over high heat. Once it begins to boil, whisk in the remaining 2 tablespoons butter, then stir in the chopped pecans and flaky sea salt and remove from heat.
6. When the dutch baby comes out of the oven, garnish the top with the sticky maple nuts and sprinkle with more flaky sea salt. Cut into 8 slices and serve immediately with whipped cream or vanilla ice cream.
Serves: 6 to 8

**These recipes were provided to PEOPLE by a chef, restaurant or culinary professional. They have not been tested for home use.**