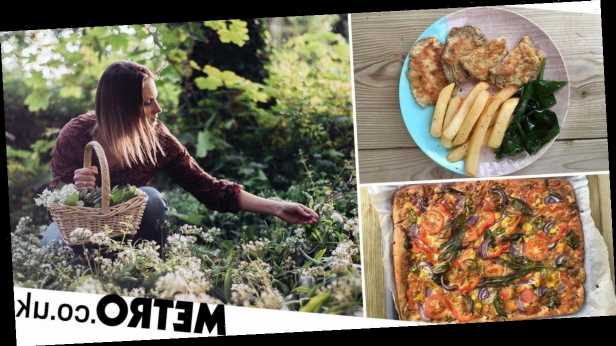 Instead of queuing outside the supermarket, mum Joanna Ruminska spends up to 14 hours a week searching forests near her home in Plymouth for things her family can eat.

The mum-of-two picks up ingredients including mushrooms, elderflower and wild garlic.

She has been foraging since childhood and now, more than half her family’s diet is sourced from the countryside or plants she grows in her garden.

She said more people are becoming interested in the way of sourcing food after recent supermarket shortages.

Former teacher Joanna said: ‘If the stores closed tomorrow and there were no deliveries, we could survive off the produce in the countryside and in our garden.

‘I’m lucky to live in walking distance of the forest and I can get all the ingredients there if I’m desperate.

‘I grew up in the Polish countryside and I’ve been foraging for as long as I can remember, but I’m the only one in the family who took it to the next level.

‘Over half of what my family and I eat is now sourced from our natural surroundings.

‘I either forage the ingredients from woodlands near my house, make trips to the coast to for things like sea beet and seaweed or grow certain vegetables and fruit which need cultivating in my garden.’

She had been using her daily exercise to go out walking and finding food along the way.

‘I spend about two hours a day foraging, but if I go further afield it can be a full day out.

‘My daughters love to join because they go off looking for their favourite flowers, like elderflower.’

Joanna recommends beginners start with wild plants most people can find in their garden or on grass verges, such as dandelions and stinging nettles.

Her favourite foraged ingredient is wild garlic, which she uses in everything from focaccia and pizza to soup, pasta and stews.

Joanna picks mushrooms such as ‘chicken of the woods’ to use as a meat alternative in noodle dishes and replaces steak with handpicked oyster mushrooms to create a vegetarian-twist on the classic steak and chips.

But she advises beginners to stay clear of mushrooms though, because of the number of poisonous varieties and the expertise required to differentiate between similar looking types.

Now bars are closed she recommends people create their own tipples from foraged plants, such as stinging nettle beer, elderflower champagne and redcurrant gin.

She said: ‘I’ve had a 400% increase interest in foraging since the start of lockdown – I’m getting a stream of messages from strangers.

‘I think people are noticing the gaps on the shelves at supermarkets and thinking about how they can source certain ingredients in different ways.

‘I’ve had lots of messages on my Instagram @incredible_edible__ from people who have sent me photos of plants in their back gardens, asking me if they can eat things they’ve found.

‘I’m a bit apprehensive about identifying things by photo as I don’t want to mislead people, you have to feel and smell a plant to properly identify it.

‘I’m happy about the surge in interest though. There are so many tasty foods on people’s doorsteps that they don’t know about.’

She says the best time to look for most plants is midday when the flowers have opened, making them easier to identify, while mushrooms are best foraged early in the morning before they’re snapped up by other people.

The mum, who was born in Poland and moved to the UK in 2006, said: ‘Some people I speak to and teach are quite sceptical about foraging initially.

‘I might mention nettle soup and they’ll smirk, but almost always they quickly come around to the idea.

‘When you tell them you can just eat your weeds instead of getting stressed about them, it makes sense.

‘Foraging is more time-consuming than going to the supermarket but it’s time better spent.

‘It’s enjoyable because you have to slowdown and observe your natural surroundings – it’s very relaxing in that way.’