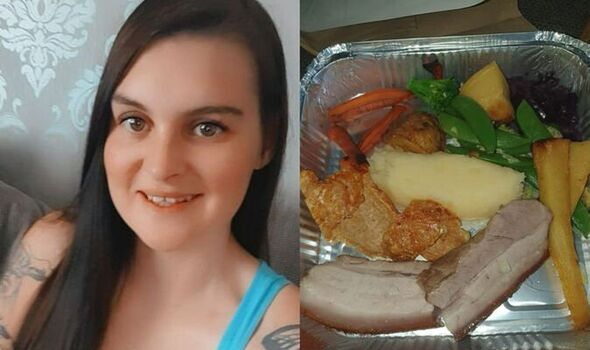 An outraged woman has shared her disbelief after being “barred” from a pub after complaining on Facebook about the Sunday dinner it delivered.

Mum, Katie Lou, posted on the social media site after receiving the “freezing cold” dinner from The Hope and Union in Stockton, County Durham.

The 31-year-old told Teesside Live her Sunday dinner “looked like a kids meal” and claimed it was “freezing” when it arrived – despite paying £15.50 for the food and a total of £20.83 when other costs were included, such as delivery.

The Stockton mum raised her concerns with the venue on Facebook messenger and, after hearing no response, threatened to post her thoughts and pictures of the meal on social media. In response, the Hope and Union called the situation “deplorable” in messages sent to Katie and, after once again making her intention of posting clear, Katie was barred from visiting again.

The Hope and Union is highly regarded as a popular place for a Sunday lunch across the country, recently featuring in The Guardian’s 30 of the Best UK Pubs for Sunday Lunch. The venue was described as “punching well above its weight” and praised for its “relaxed atmosphere” inside.

Reviewers on Tripadvisor also show how the pub is highly thought of, holding an impressive 4.5-star rating based on 407 reviews. One user described their Sunday lunch as “absolutely faultless” and another called it the “best-hidden gem.”

However, Katie was left unimpressed, saying: “I thought I’d order [a Sunday dinner] from The Hope and Union in Stockton, I ordered and it came to about £15.50, and that was with an extra Yorkshire pudding. The dinner was meant to come with pork belly, crackling, apple sauce, creamy mash, seasonal greens, roasties, roast carrots, parsnips, and red cabbage.”

“The apple sauce was missing and I got three carrots, two roasties, two parsnips, loads of peas in a pod, and a small portion of red cabbage. It also came with gravy on the side in a pot. I was not happy – I paid £15.50 and it looked like a kids’ meal. It was freezing cold and the potatoes tasted like they had been sat for a while and been re-cooked – they were dry.”

The mum-of-one decided to complain, attempting to call the venue through Uber Eats. She said: “I explained to a person on the phone [from the pub] who told me to message their Facebook and said they would reply straight away. I messaged at 5.30pm and they replied at 6.22pm.”

Katie posted screenshots of her messages with the venue on Facebook, where she threatened to take the matter to social media if they did not respond. In the messages seen by Teesside Live, the pub then called the situation “deplorable” and added: “our record for customer service speaks for itself.”

Katie said: “I thought it was a bit rude and unprofessional. Everywhere that does food isn’t going to always get positive reviews. Sometimes negative reviews are a good thing so you know what to improve on.”

She then once again made the intention to post her opinions on social media, which saw the pub respond with a simple statement: “You’re barred.” Regarding this response, Katie said: “I thought it was ridiculous. I ordered a dinner and it has come the way it did and I was complaining – it’s not my fault.

“I have left it at that – I would’ve gone back for dinner to try it inside but I can’t know I’ve been barred so I won’t be going back.”

The Hope and Union pub has been approached for a response.