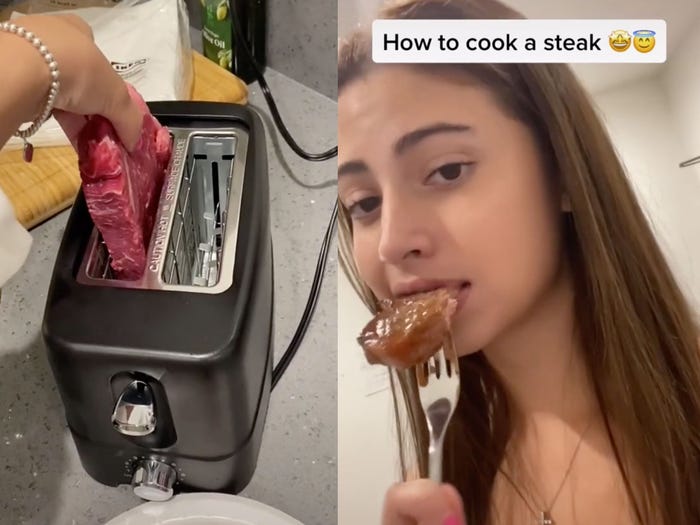 There are so many ways to cook a steak, from grilling it to baking it in the oven.

But one TikTok user left food lovers confused and dismayed after she shared a video showing how she cooks her steaks in the toaster.

"How to cook a steak," Juliette — who runs the popular TikTok account @itsmeju1iette — wrote in the caption of the viral clip, which had 10.8 million views at the time of writing.

The video shows Juliette popping two raw steaks into her toaster as "It's Beginning to Look a Lot Like Christmas" plays in the background.

She lets them cook and then takes the steaks out with a pair of tongs, putting them on a plate as steam rises from the meat. She then covers the steaks with A1 Sauce and takes a big bite as the video comes to an end.

The video caused many to question Juliette's skills in the kitchen, but the TikTok chef told Insider that she's been cooking her entire life

"When I was little, I used to cook in my Easy Bake Oven, which inspired me to take my cooking skills to the next level," she said.

Since Juliette is in college and doesn't have a kitchen, she often has to get creative with her cooking

"I don't have a stove or oven, only a coffee maker, toaster, and hair straightener," she said. "My boyfriend wanted steak for dinner, so I popped the steak in the toaster."

Juliette has posted other videos showing off her creative methods for cooking meals with her limited tools. She's also made spaghetti and meatballs in a coffee maker, and cooked bacon and popcorn with her hair straightener.

tag a friend you would make this for 😍 ##foryou ##cooking

But Juliette said her favorite experiment has definitely been the toaster steak.

"The steak was amazing. I'm not just saying that to prove everybody wrong," she added. "I actually ate half of the steak. It was fully cooked."

"I was surprised that it actually worked. Some people think the video is fake, but it's 100% real. I would recommend that more people cook with their toaster," she told Insider.

Juliette has already used her toaster to cook more meals since trying it with the steak.

"My toaster did survive," she said. "I just cooked shrimp yesterday in the toaster and it grilled the shrimp perfectly. My boyfriend loved it."

Juliette's followers weren't convinced, and many wondered what Gordon Ramsay would think

A number of people tagged the "MasterChef" star in their comments, hoping he would make one of his famous #RamsayReacts TikTok videos about the toaster steak.

"I'm not even Gordon Ramsay and I'm mad," one commenter wrote.

"Gordon Ramsay isn't gonna be happy about this one," another added.

"In my opinion, it's all kinds of wrong," said Brad Carter, the Michelin-starred chef who runs Carters of Moseley in Birmingham, England. "Contact is the best for the steak for the crust, obviously salt is going to fall off into the toaster, there's all kinds of safety hazards. It seemed to work okay for her, but consistently treating the ingredient with respect — to me — is not putting it in a toaster."

"There's a reason a toaster was designed the way it was, and it's definitely not to lose steak juice in the bottom," he added. "I think that's pretty wild, but to each their own and skill level, I suppose."

Juliette said she was shocked that her clip was such a hit online, but she wasn't fazed by anyone's critiques.

"I didn't expect it to go that viral," she said. "Most of the comments were about how I didn't season the steak and added too much A1 sauce. But who doesn't like A1 sauce!?"