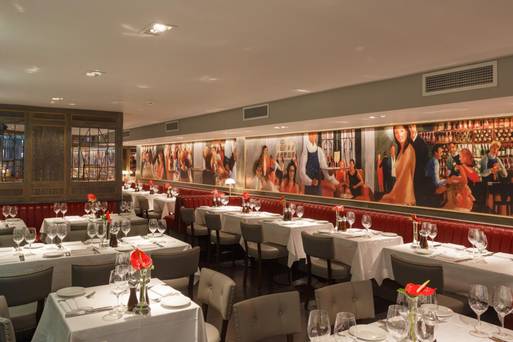 If you’re coming to Dublin by Dart or train, hop off at Pearse Street station in D2, and head for the urban-style Bread 41, which does the best croissants in town, not to mention mushrooms on sourdough with fried egg, ketchup, and blue cheese. Towards the end of the week, it’s open until 9pm doing pizza – there’s takeout available also.

Bullet on Little Mary Street, D7, does what it says on the tin – duck and dumplings. Cooked upright in special ‘bullet ovens’, the skin is crispy, the flesh succulent, and the plum sauce delish. They sell wine, but no beer – Hacienda Bar is nearby. Handy for Henry Street shoppers.

Ross Lewis’s Michelin-starred restaurant on Parnell Square, D1, epitomises the very best of Dublin. Tick it off your wishlist and bag a table for their festive lunch at €57.50, or try the six-course tasting lunch at €65 (Tuesday to Friday). Alternatively, the festive dinner menu is €87.50.

Korean-style fried chicken is what it’s all about in Chimac on Aungier Street, D2, and your kids are going to think you’re so cool if you take them here. Of course, it’s also about the fixings – Korean hot and sriracha caramel being the hot-favourite sauces here.

Kevin Hui’s superb Chinese restaurant in Sandyford, D18, was recently voted number 14 of 50 Best Chinese Restaurants in Europe by the Dubai-based Big 7 Travel. Beloved of captains of industry and rock stars alike, it’s also the perfect spot to gather and share exquisite dishes, such as their camphor tea smoked duck.

The legendary Davy Byrne’s pub on Duke Street, D2, which was immortalised by James Joyce in Ulysses, was sold recently. Never fear, it’s as good as ever, and is a cosmopolitan refuge from the Grafton Street crowds. It serves breakfast from 9am to 11.45 am on weekdays (11am to 12.30pm on Sundays) and the heart-warming, classic dishes range from oysters to Irish stew to seafood platters.

Catch up with friends in this legendary pub on Baggot Street, D2, without moving your bum off the stool, over breakfast, lunch, or dinner, interspersed with cocktails and bubbles. Tuck into their full-Irish breakfast, top up with shepherd’s pie, and wind down with bangers and mash. Watch out for politicians.

At Christmas, this fabulous five-star D4 hotel is really the biz, with a lavish array of festive trees setting the festive tone. Have cocktails in the Ice bar with the girls, or go to The Lobby Lounge for a festive afternoon tea with granny – €40 per person/€55 with a glass of Champagne – booking essential. As for people-watching – was that Mel Gibson I saw strolling through the hall? Yes, it was…

With Serge Gainsbourg and Jane Birkin crooning Je t’aime in the background, plenty of Ricard cocktails behind the bar, and excellent food from chef Chris Fullam, it’s perfect for a romantic Christmas interlude with a paramour, or even your better half! Marco Pierre White is the man who gave back his Michelin stars to focus on serving really good Francophile classics. There’s an old-school citified glamour feel about MPW on Dawson Street, D2, and there’s always a buzz, and a loyal clientele of movers and shakers. They have Christmas lunch and dinner menus at €47.50 and €59.95 respectively, plus a la carte menus.

Conor Sexton and Jutarat ‘R’ Suwankeeree’s Nightmarket in Ranelagh, D6, is perfect for celebrating, with superb Thai food. Named after the night markets in Chiang Mai, in Thailand, where R would help her grandmother as a child, it has a Christmas menu at €45 (minimum eight people) as well as an a la carte. The cocktails are excellent.

Peploe’s on St Stephen’s Green is a bastion of superb French food and fine wines – think pan-fried veal kidneys; sole bonne femme, and rum baba. It even has the guest book of the legendary Jammet’s restaurant, in which you’ll see many famous historical names. Food is served from 12pm right through to dinner until “late”. Sunday lunch is from 12pm to 8.45pm.

Nothing puts a smile on one’s face faster than a great slice of pizza, and with pizza being sold by the foot at Pizza Yard in Ranelagh, D6, it has a lot of happy customers. An ideal spot for getting people of all ages together. They also do pasta and other mains – and don’t forget the Prosecco!

Set in the original student halls of UCD, Newman House on St Stephen’s Green, D2, this delightful setting in the Museum of Literature Ireland, has just been reopened as a rather smart cafe by sisters Domini and Peaches Kemp. It serves breakfast from 10am to 3.30pm, while it also does lunch from 11.30am to 3.30pm. The Old Spot on Bath Avenue, D4, serves gastropub grub that has the hipster, the mammy, the rugby buff and the socialite all drooling for the roast Texel lamb, potato & olive terrine, and salsa verde. Think long December lunches of quaffing and scoffing. Sundays are legendary.

For Dubliners, The Shelbourne Hotel on St Stephen’s Green is synonymous with Christmas. Its Horseshoe Bar has attracted politicians, theatre folk and billionaires – plus the hangers-on – for 60 years. The Saddle Room is the place to be for Christmas Eve lunch, where three courses will knock you back €129 per person.

“Grafton Street’s a wonderland, there’s magic in the air…” And just off Grafton Street, the five-star Westbury Hotel is the perfect glamorous city hotel for afternoon tea or lunch. I love The Sidecar, the hotel’s sleek 1930s-style cocktail bar, which has a great bites menu, ranging from oysters to tortillas to the ultimate lobster roll. Soak up the rich, theatrical atmosphere of the Troc, as it’s known to its regular luvvies, on St Andrew’s Street, D2, beneath photos of famous faces from stage and screen. The waiters are wonderful. Check their festive lunch and dinner menus at €49 and €55 respectively. Break a leg!