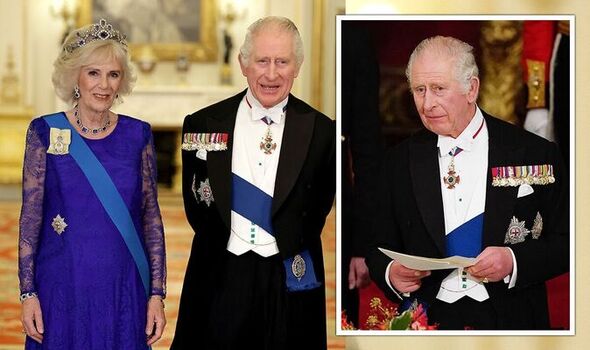 It is reported it takes an average of six months to prepare a state banquet and a total of three days to set the table. On the table, guests will find six glasses per person: one for water, for champagne, for red and white wines, for dessert wine and port.

There is a strict royal rule that mandates that every set must be 18 inches apart and staff at Buckingham Palace check this is done correctly using a measuring stick.

Similarly, every chair is at the same distance from the table, and the staff is likely to use a traffic light system in the kitchen to coordinate in terms of serving the dishes.

It is also reported King Charles has a special cushion on his seat for his back pain and is served a bowl of olive oil instead of butter for his bread at the beginning of the banquet.

Before the dinner starts, King Charles gives a speech which is followed by toasts and the national anthems, which are normally performed by an orchestra.

A royal rule stipulates that when the King finished his food, all the other guests must stop eating too. Queen Elizabeth was known to be a fast eater but it is unknown if King Charles’ speed may be an inconvenience for the other guests.

Another rule dictates that the guest of honour who sits to the right of the King is the one he will be speaking to during the first course of the dinner. For the following course, the monarch then switches and talks to the person on his left.

It is believed guests can not leave the banquet or the evening event unless permission has been given.

Guests must never touch the King and are only allowed to shake hands with him if he offers it first.

Former royal chef Graham Tinsley explained that when Queen Elizabeth had a head of state banquet, all the chefs had to meet at a police station and they travelled from there to the Palace for security reasons.

“For higher calibre banquets, we’re required to put all our food, containers, knives and kitchen equipment through an X-ray machine whilst motorcycles then take us into the Castle,” he told Hello!.

Anna Reynolds, a Royal Collection Trust curator, said attention to detail was crucial for a state banquet: “It’s that element of uniformity that makes the spectacle so special, it’s having everything exactly, precisely aligned.

Another rule King Charles initiated in the Palace has to do with a type of food he hates and is not allowed to be served at any banquet.

He recently decided to ban foie gras from all menus served at his royal residences. A spokesperson from People for the Ethical Treatment of Animals commented: “As Prince of Wales, King Charles removed foie gras – a despicable product for which ducks and geese are force-fed until their livers swell up to 10 times their natural size before the animals are slaughtered – from his royal residences.

“Now, Peta has received confirmation that His Majesty’s compassionate policy extends to Buckingham Palace and all other royal residences.”

King Charles explained once: “For years I haven’t eaten meat and fish two days a week and I don’t eat dairy products one day a week,” he told the BBC.

Carolyn Robb, a former royal chef, spoke to Channel 5 about why the divisive dish was prohibited by then-Prince Charles.

She said: “Foie gras was one thing that we never served in the royal household, [Prince] Charles being so very keen to promote good animal husbandry.

“Obviously he was very against the way that foie gras is produced. All those things that involved any kind of cruelty or maltreatment of animals.”