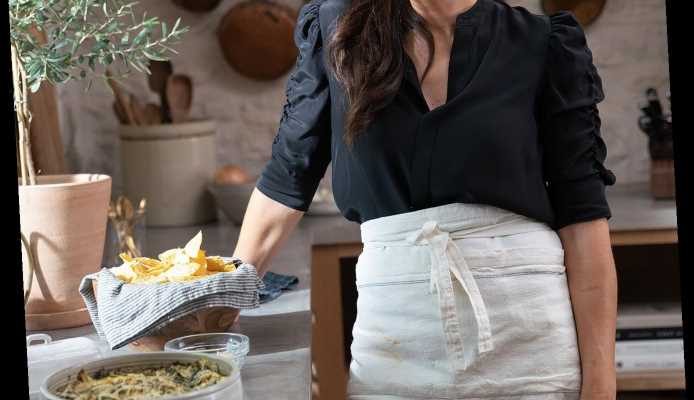 Joanna Gaines is showing off one of her family's favorite recipes.

In PEOPLE's exclusive clip from Tuesday's episode of Magnolia Table with Joanna Gaines, Joanna, 42, gets to work in the kitchen making a simple appetizer of three cheese balls, each coated in a different toppings.

"Cheese is a staple in the Gaines household," the mother of five says. "And even Chip's parents, anytime we go over there for a holiday there's always cheese balls out so I feel like it's just something I had to learn quick."

Joanna creates the cheese balls with a mixture of cream cheese, cheddar, gouda, and sun-dried tomatoes. Then, she uses an ice cream scoop to form three medium-sized balls.

Next, Joanna introduces the three toppings that she'll use to coat the cheese balls: chopped parsley, fresh cracked ground pepper and chopped walnuts — which Joanna admits is her "personal favorite."

As Joanna rolls each ball into a different topping, she says, "It's about all you got to do. It's really simple."

The cooking process causes the former HGTV star gets her hands a bit dirty, but she says that she's just fine with that. "It's a little messy, but I think if your kitchen is not messy, you're not having fun," she says. Joanna also says that husband Chip — with whom she shares kids Drake, 16, Ella, 14, Duke, 12, Emmie, 11 next month and 2-year-old Crew — has commented on her messy cooking techniques before.

"Every time Chip walks in, he's like, 'You got to figure this out,' " says Joanna. "And I'm like, 'No, I love it. I love making a big mess. If I'm in the kitchen, I'm going to let everyone to know that I'm in the kitchen. Mama is playing."

Joanna finishes off making the cheese balls by wrapping them in plastic wrap and sticking them in the fridge, where they can stay for 3-4 hours or overnight if made the day before. Joanna first announced plans for the cooking show last November during an appearance on a special Texas taping of The Tonight Show with host Jimmy Fallon.

"It's a lot of work, but we're knee-deep in it right now, and I think what we love is just the idea of just finding amazing stories, people who are passionate about what they do, whether it's cooking, design, business," Joanna said of the Magnolia network. "We're excited. This is a lot of fun and a lot of work."

Magnolia Table with Joanna Gaines is available to stream on discovery+.