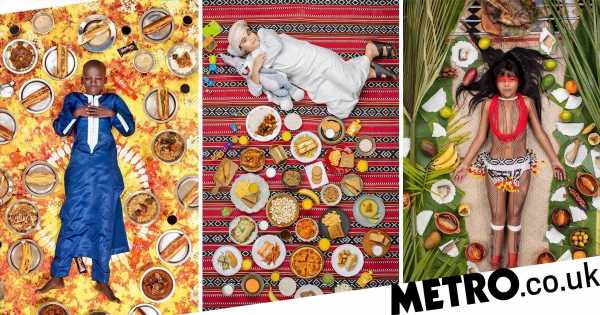 If someone photographed everything you ate in one week, what would it look like?

Lots of chocolate croissants and astronomical amounts of coffee?

To show what kids from around the world eat in a seven-day period, photographer Gregg Segal set up artistic shoots with children representing their country and the diet that goes with it.

Over the course of three years, Gregg visited countries such as the US, India, Malaysia, Germany, France, Italy, Senegal, the United Arab Emirates, and Brazil.

The photographer is documenting his findings in a book entitled Daily Bread: What Kids Eat Around the World.

In the images, the children can be seen lying in their national dress, with local delicacies surrounding them.

One of them is nine-year-old Kawakanih Yawalapiti, a member of the Yawalapiti tribe who live in Xingu National Park, a preserve in the Amazonian Basin of Brazil.

Another is Anchal, 10, who lives in a tin shack on a construction site in Mumbai with her family.

Photographer Gregg’s idea for Daily Bread grew out of his experiment into how much waste we produce.

He previously asked his family, friends, and neighbours to save all the rubbish they create in a week.

Gregg then pictured them lying next to all the waste, to highlight the extent of our gratuitous throwaway culture.

In the same way, he felt that journalling how much is consumed by some of the poorest groups in the world might make us more conscious of our dietary habits.

Here are the rest of the stunning images he has shot: