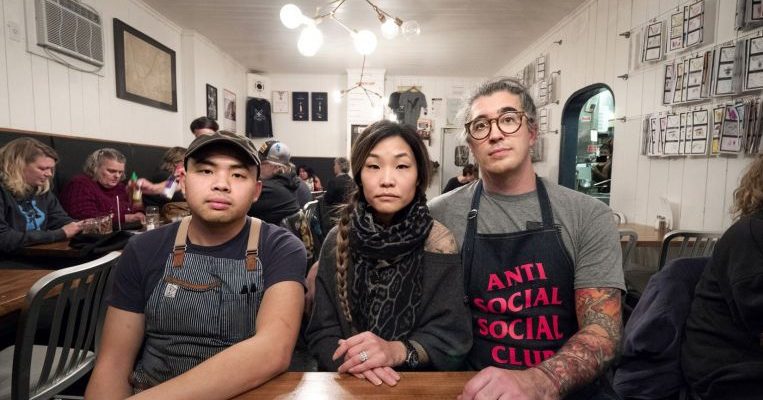 BLOOMINGTON, MINNESOTA (WASHINGTON POST) – Sitting at a large round table at Grand Szechuan, its lazy Susan loaded with plates of mapo tofu, dan dan noodles and other Sichuan specialties, Eve Wu says she is done with Minnesota nice.

She is angry, and her pique is directed at one of the Twin Cities’ most powerful personalities, Andrew Zimmern, the bespectacled chef and TV host who recently insulted Chinese American food during a widely circulated video interview.

Eve and her husband, Eddie Wu – she is a baker, he is a chef with a Korean-influenced diner – are so incensed they have partnered with Hmong American chef Chris Her to host a series of pop-ups to foster conversations around the issues raised in Zimmern’s interview: white privilege, cultural appropriation and casual racism.

About 100 people showed up for the first pop-up, on Dec 7, at Eddie Wu’s Cook St. Paul, where they dined on kimchi fried rice, mandu dumplings, Hmong sausage and other dishes served in a box stamped with the word “horse–,” a derogatory term that Zimmern used to describe the mall-level cooking often foisted off as Chinese food in America.

If you are wondering what Hmong and Korean fare has to do with Chinese cuisine, you need to understand how Zimmern’s insults landed with Her and the Wus.

When Zimmern dissed Chinese American food – P.F. Chang’s in particular, which Zimmern labeled a “rip-off” – they say he dissed the culinary efforts of all Asian immigrants and Asian-Americans who have tried to find their way in the US mainstream.

“I’ll back P.F. Chang’s and their family any day of the week. Asians forever!” says Eve Wu. “If we have to be the generation that is going to be calling out problematic behavior, because in the past it hasn’t been, then I’m going to do it. . . . I will do a 100-year war with him.”

Eve Wu’s indignation is just the most vocal example of the responses generated by Zimmern’s interview with Fast Company, which was published to coincide with the debut of Lucky Cricket, the Bizarre Foods host’s 200-seat Chinese restaurant and tiki bar in a Minneapolis suburb.

The interview has shaken the faith that some had placed in Zimmern, a former drug addict who cleaned up his act in the Twin Cities and become one of the region’s brightest lights. He is, after all, a guy who has spent much of his career exalting the food of foreign countries, not denigrating immigrants’ attempts to assimilate into America.

In the interview with Mark Wilson, Zimmern said he wanted to introduce Midwesterners to Sichuan chile oil, hand-cut noodles and Peking duck. Lucky Cricket, Zimmern suggested, could even morph into a 200-outlet chain, kind of like P.F. Chang’s, but for “authentic” Chinese cooking.

Zimmern, a 57-year-old white man from New York, set himself up as the saviour of Chinese food in the Midwest.

“I think I’m saving the souls of all the people from having to dine at these horse– restaurants masquerading as Chinese food that are in the Midwest,” Zimmern said.

Looking back on that interview, conducted this summer at the Minnesota State Fair, Zimmern is at a loss to explain how those words could have tumbled from his mouth.

“I let myself get carried away and have too much fun as opposed to realising that I was working,” he says at Szechuan Spice in the Uptown neighbourhood. “You stop being mindful, and you say something flippant. You’re not being precise with your words.”

Zimmern would spend the better part of a stone-cold Tuesday with me in the Twin Cities, where the temperature never cracked freezing. Wearing a knit cap and a thick yellow parka,Zimmern led me on a tour of some of his favorite Chinese restaurants, ending with a stop at Lucky Cricket.

Zimmern’s affection for Chinese food, he says, began in childhood. He remembers being 3 years old and occupying a window seat with his father at Bobo’s in New York’s Chinatown, coming to grips with a lettuce wrap of minced squid and shrimp.

Over the next 54 years, when not grappling with his addictions, Zimmern says, he became a serious student of Chinese cookery, learning its history, its techniques, its leading practitioners.

“I believe Chinese cooking and Mexican cooking are the two great cuisines in terms of depth and breadth. They outpace French and Italian,” he says, navigating his white Mercedes E400 rental into the parking lot at Mandarin Kitchen in Bloomington.

During its weekend dim sum, Mandarin Kitchen is as packed as a subway station at rush hour. But on this afternoon, Zimmern quickly secures a table without needing to pull his hat down low to hide from selfie hunters.

He’s on the prowl for whole king crab, but there is none today. Zimmern settles for a whole lobster, with ginger and scallions, and half a roast duck.

As if on cue, the Rev. Stephen Tsui, an 85-year-old retired Lutheran minister, approaches Zimmern, clutching a copy of the China Tribune.

The paper had just published a story about Zimmern’s interview and the fallout.

“They don’t know that he’s promoting (Chinese) culture,” Tsui says. “I defend on him. I understand him more than many other people.”

Zimmern is grateful for the unsolicited support. He also swears it is not a setup for a visiting journalist. “I didn’t tell the restaurants I was coming,” he says.

At other Chinese restaurants in the Twin Cities I visited without him, the reactions to Zimmern’s comments are more reserved, a mixture of forgiveness, frustration and the kind of resignation that comes, perhaps, from hearing one too many authenticity hounds bad-mouth your menu.

“I think he understands that he didn’t just insult Chinese independent restaurants like ourselves,” Fong says, “but he really insulted people who like to come to our restaurants, which is a lot of people.” Then he allows himself a good laugh, perhaps a last one.

Over at Rainbow Chinese on Nicollet Avenue – a stretch widely viewed as a culinary destination – chef and owner Tammy Wong stands in her spotless, stainless-steel kitchen outfitted with high-powered woks.

She’s laying out her magnificent life story: She is the oldest daughter born to ethnic Chinese parents living in Cho Lon, Vietnam, which has long been a magnet for Chinese immigrants and refugees.

Wong’s family fled Vietnam after the fall of Saigon, landing in New York City and eventually settling in Minneapolis in 1983.

Four years later, her father decided to open a restaurant, even though no one in the 11-member clan knew the first thing about running such a business. Wong had to improvise, cobbling together a menu from dishes she spotted at other Chinese American restaurants.

The food leaned on her family’s Cantonese traditions, but modified to appeal to the Scandinavian palate of the region.

Over time, both Fong’s and Rainbow Chinese developed loyal followings based on their personalised takes on Cantonese cooking.

If reluctant at first, Wong came to embrace her role as chef. She constantly tinkers with her menus, whether incorporating produce from farmers markets or re-engineering sauces to feature fresher, more healthful ingredients.

These days, she also tries to cater to Minnesotans who grew up eating Thai, Vietnamese or Laotian dishes.

“I would not call (my food) Chinese American,” Wong says. “If it’s anything, I would call it Chinese Minnesotan.”

Both Wong and Edward Fong view their food as a legitimate expression of Cantonese cooking, informed by local tastes and available ingredients, like any other regional cuisine. They don’t take kindly to having their efforts – and their family’s efforts – diminished by Minneapolis’s favorite son.

“I was not right away totally offended” by Zimmern’s comments, Wong says. “But I just felt that, ‘Oh, my God, this maybe offended a lot of other people.'”

As he offers quick reviews of the dishes before him at Szechuan Spice – generally positive, by the way – Zimmern stops cold when I relate what Wong and the Fongs had told me. Zimmern had already read a fair number of comments online. He knew his words had offended. But hearing from people whom he knows, and respects, hits him hard.

“Welcome to how awful I feel,” he says, tears welling in his eyes.”Who wants to hurt someone that you care about? And to do so just out of flippance and stupidity?” he continues. “That’s the kind of stuff I used to do before I learned that mindfulness and words matter.”

Zimmern says he wants to do more than apologize to the people close to him. He wants to make amends, and one way to do so, he says, is just to shut up and listen. He wants to hear their truth and their opinions on such topics as cultural appropriation. (For the record, no one I spoke to cares much if Zimmern cooks or profits off Chinese food.)

Eve Wu would like Zimmern to listen, too. The celebrity chef was invited to the first Horse– pop-up, but he never showed. (Zimmern says he never saw the invite.)

Wu wants Zimmern to reconcile two seemingly incompatible positions: A man who has made a career out of elevating foreign foods, and a man who would call some Chinese American food “horse–.”

She wants him to square his affection for immigrant culture with his view of immigrant Philip Chiang, co-founder of P.F. Chang’s, whom Zimmern described as Chinese on the outside but a “rich American kid on the inside.” (Chiang’s email response: “I am not going to get involved in his muck. I am totally comfortable with who I am and with who I am not.”)

Although she’s angry, Wu is also sympathetic. She knows it’s hard to confront your contradictions. She’s living proof of it: She’s Korean by birth, adopted by a conservative white family.

She’s experienced the sting of racism while, at the same time, dealing with the “inner monologue” of a white woman who calls the police on any perceived threat.

Maybe Zimmern can start the unpacking at Lucky Cricket, which has already drawn criticism for its awkward amalgam of Chinese fare and tiki culture.

As Zimmern trots out some dishes to sample – Sichuan wontons, crispy glazed 18-hour ribs, soy sauce noodles – we begin to dissect the establishment, from the food on the table to the Easter Island-like heads in the bar.

With each element that we analyze – Zimmern points out the chicken-and-waffles riff on the menu, I note the thin layer of chile oil beneath the wontons, which traditionally swim in the hot stuff – it becomes clear Lucky Cricket is not the temple to authenticity that he intended.

It is fusion. It is a sexier, 21st-century version of the Chinese American establishments that he had dismissed in the first place. They both meet customers where they are.

“I happen to think of it as fusion, too,” Zimmern says. “That’s why I regret so much the flippant way I described the restaurant. . . . Words matters, and the imprecision of that matters. My imprecision matters.”

Imprecision may explain another twist in the Lucky Cricket saga: Its next location may not be in the Midwest, the land Zimmern wants to save from inferior Chinese fare.

Among the cities where Zimmern and his business partner, McDermott Restaurant Group, are scouting locations is Las Vegas, that neon beacon in the desert where image, not authenticity, is the coin of the realm.