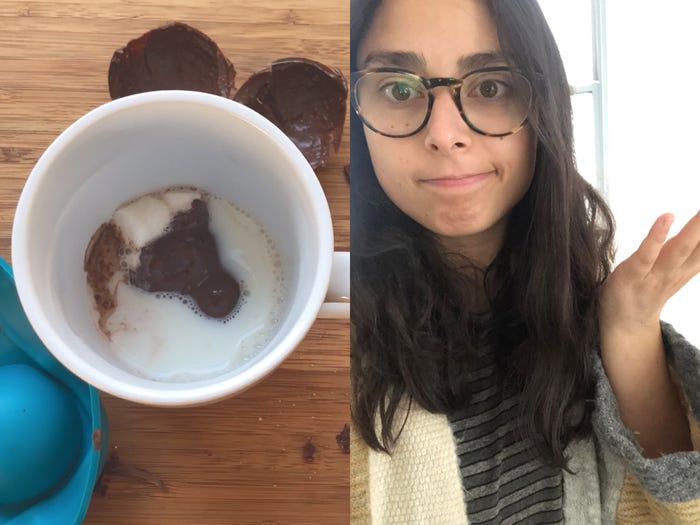 Hot cocoa bombs are the latest food trend taking over TikTok, and for good reason — the chocolatey "explosions" when you pour hot milk over the balls are ultra-satisfying to watch. One TikToker, Stephanie Eva Ann Kelly (who goes by @stephanieevaann on the app), shared a video demonstrating the satisfying way these spheres explode with marshmallows. The video had 3.4 million views at the time of writing.

Home cooks began sharing their own recipes for homemade, bursting cocoa balls, which was great news for those who couldn't find the ready-made hot cocoa bombs at their local Costco. I decided to channel my inner chocolatier — my credentials include 25 years of experience consuming chocolate — and get busy in the kitchen to try them out.

All of my chocolate-making peers on TikTok seemed to create these beautiful confections that blossomed gracefully in mugs, but I didn't get so lucky with mine.

I had a few hiccups along the way, and the finished product was more of a melty sphere than a Jet-Puffed explosion.

Here's what happened when I tried to tackle this viral food trend in my own kitchen.

Hot cocoa bombs may look super intricate, but at their core they require just three ingredients. 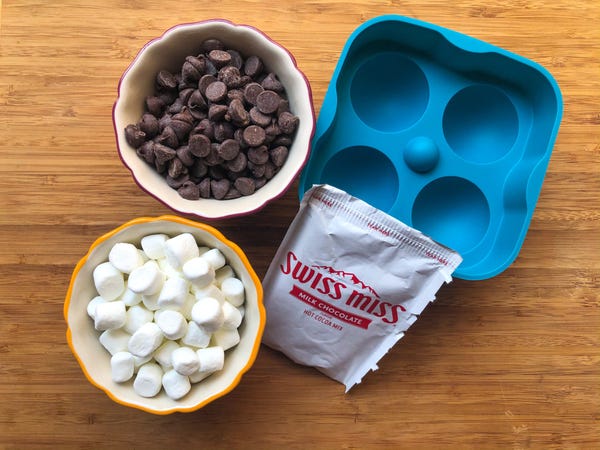 I first saw the fancy, flavored hot cocoa bombs that people were melting on TikTok and thought, "How am I possibly going to make one of these?"

But then I realized I could bring it back to the basics and stick to the plain old chocolate variety.

I gathered chocolate chips, mini marshmallows, and hot cocoa mix as my ingredients. The only other thing I needed was a silicone mold to make the half-spheres. The mold I used was actually for ice cubes, but it worked just fine.

The first step was the easiest, but I couldn't even get that right. 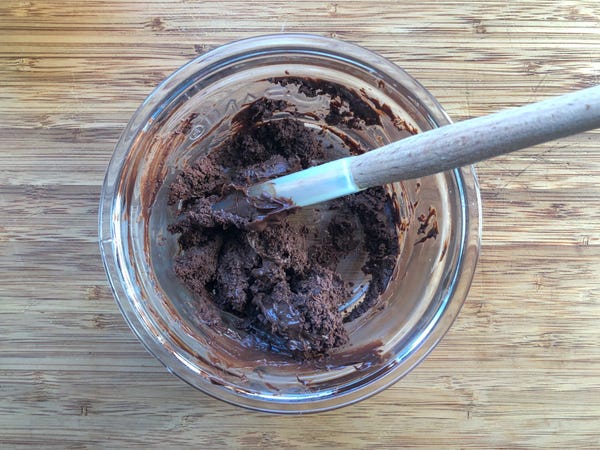 First, I had to melt the chocolate chips. Turns out, melting chocolate isn't as foolproof as it seems!

I stuck my chips in a bowl and microwaved them for 15 seconds at a time. After the second melting period, I saw that the chips were starting to get that velvety sheen that melted chocolate gets.

Rather than being patient and stirring the chips to get them to fully melt from the heat of he bowl, I decided to put them back in the microwave for another 15 seconds. That was a mistake.

I ended up burning the chocolate slightly so that it dried out and became kind of chalky in its texture. I was able to salvage it by stirring continuously, but let my mistake serve as a warning to anyone who wants to attempt their own chocolate bomb.

Then it was time to fill the mold. 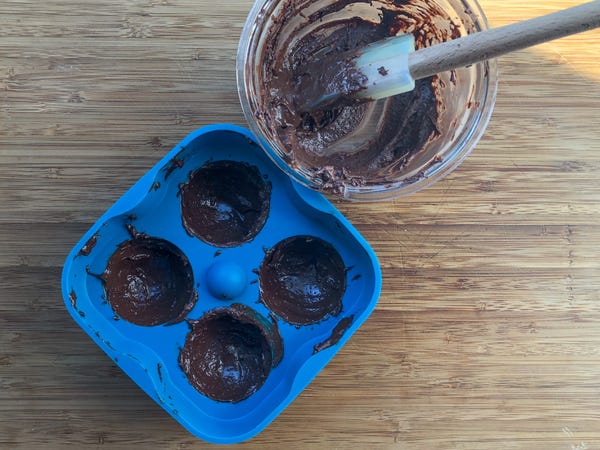 After I got the chocolate to go back to being a thick, melty consistency, I used a small silicone spatula to fill the mold.

I swiped some chocolate around the edges of each crater and tried to make sure there was a thick enough layer to prevent cracking when I eventually went to remove the spheres.

I put them in the freezer for around seven minutes to set. Turns out, I only filled two of the four properly.

Half of my spheres cracked beyond usability. But I still had two good ones left! 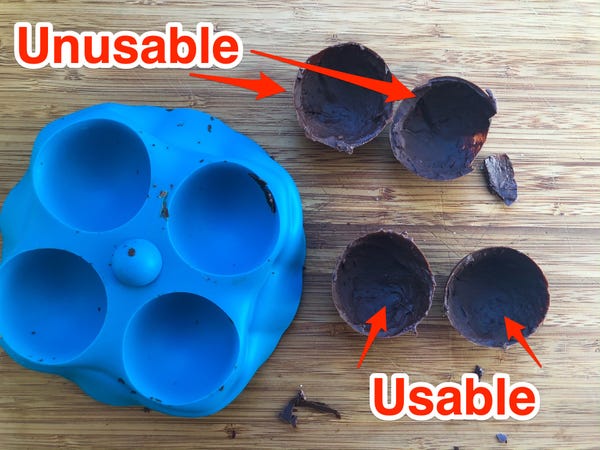 Removing the chocolate was a little more difficult than I had anticipated, but I got two out successfully.

I tried to release the sides and pull out the halves, but that didn't completely do the trick. The better strategy was pushing very lightly on the bottom until I heard a little pop indicating the separation of both components.

Filling and sealing the halves was easy — just watch out for your fingers! 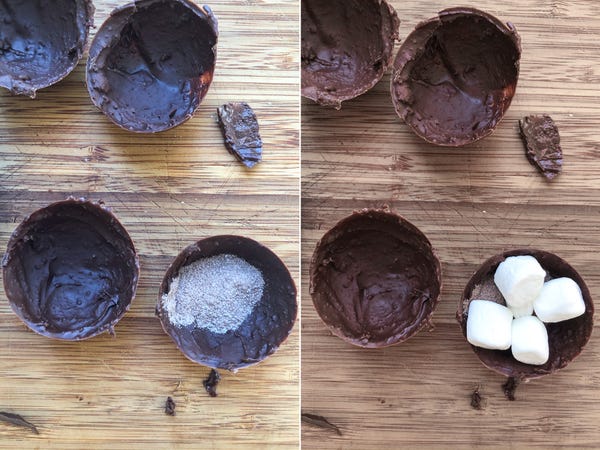 Sticking with the classic hot cocoa flavor profile, I used around a tablespoon of Swiss Miss hot cocoa mix and five miniature marshmallows to fill my chocolate bomb.

I considered adding something like ground cinnamon and nutmeg, but I wanted to keep things as simple as possible.

The amount of fillings I used fit perfectly into my little half sphere.

Then I had to seal the two halves together.

Sealing the two halves was challenging because the heat from my hands melted the chocolate. 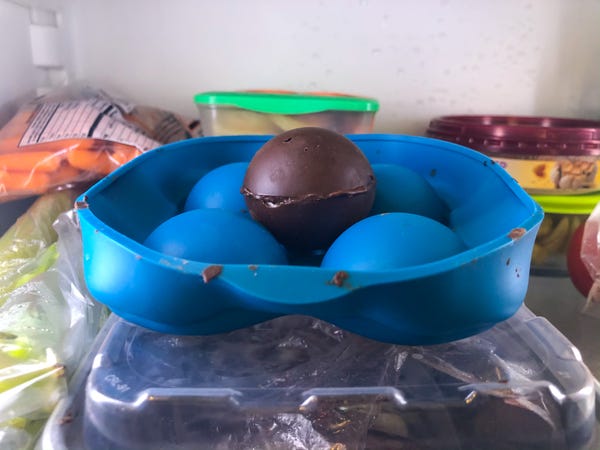 I tried to use a hot spoon to melt the edges of the filled cup, but that didn't work out too well. Instead, I heated a plate and lightly touched the empty half to it.

I quickly pressed the partially-melted chocolate onto its other half and put it in the refrigerator to stop the residual heating that was happening. This actually worked really well.

However you decide to melt the two edges together, just know that your hands will give off some heat. So be careful and try to minimize the amount of time you're handling the chocolate.

After it was a solid ball, I heated some milk and got my mug ready. 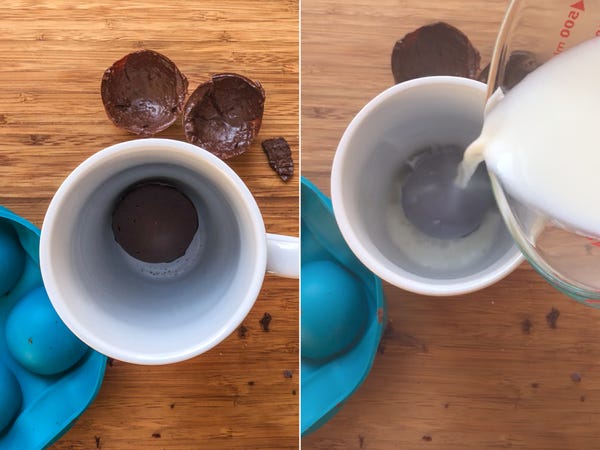 Using a measuring cup, I heated milk in the microwave and got ready to pour it over the chocolate ball.

After watching a few videos of successful hot cocoa bomb explosions, I was so excited to watch this creation blossom into a beautiful release of fluffy marshmallows and powdery cocoa mix.

Here's what I was expecting:

The "explosion" didn't quite happen like I dreamed it would. 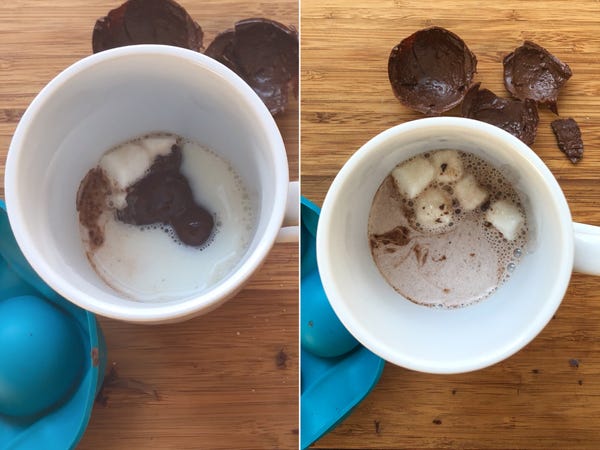 My hot cocoa bomb explosion was extremely anticlimactic and not much of an explosion at all.

The ball started to melt when I poured the hot milk over it. But rather than popping open, it kind of gave birth to one marshmallow at a time. It spit out a little chocolate blob which popped and released some cocoa mix. Then the sphere melted over the other marshmallows.

I poured some more milk hoping that would help the process along. That kind of worked.

You can see what happened for yourself:

Even though I stirred the mixture, there was still a glob of melted chocolate at the bottom of my mug. 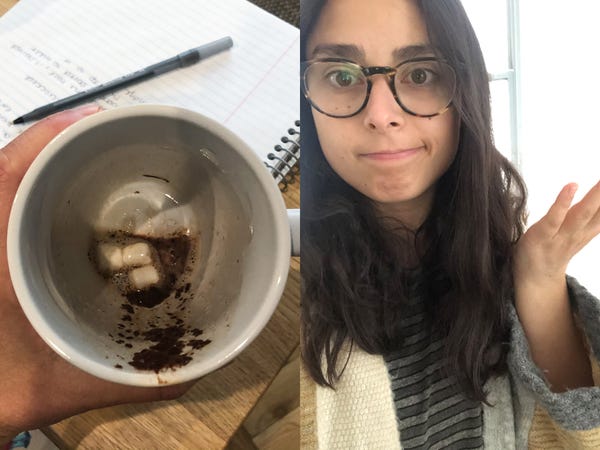 I gave it my best shot, but this chocolate bomb wasn't exactly a success. That said, it wasn't a complete failure either!

While it didn't give me the exciting explosion I was hoping for, I still got a wonderful hot cocoa on a chilly fall morning.

I would caution other ambitious, first-time chocolatiers to pay attention and not over-melt their chocolate.

I'll certainly give it another try and test them out on my chocolate-loving niece and nephew, who are my real critics when it comes to anything sweet.