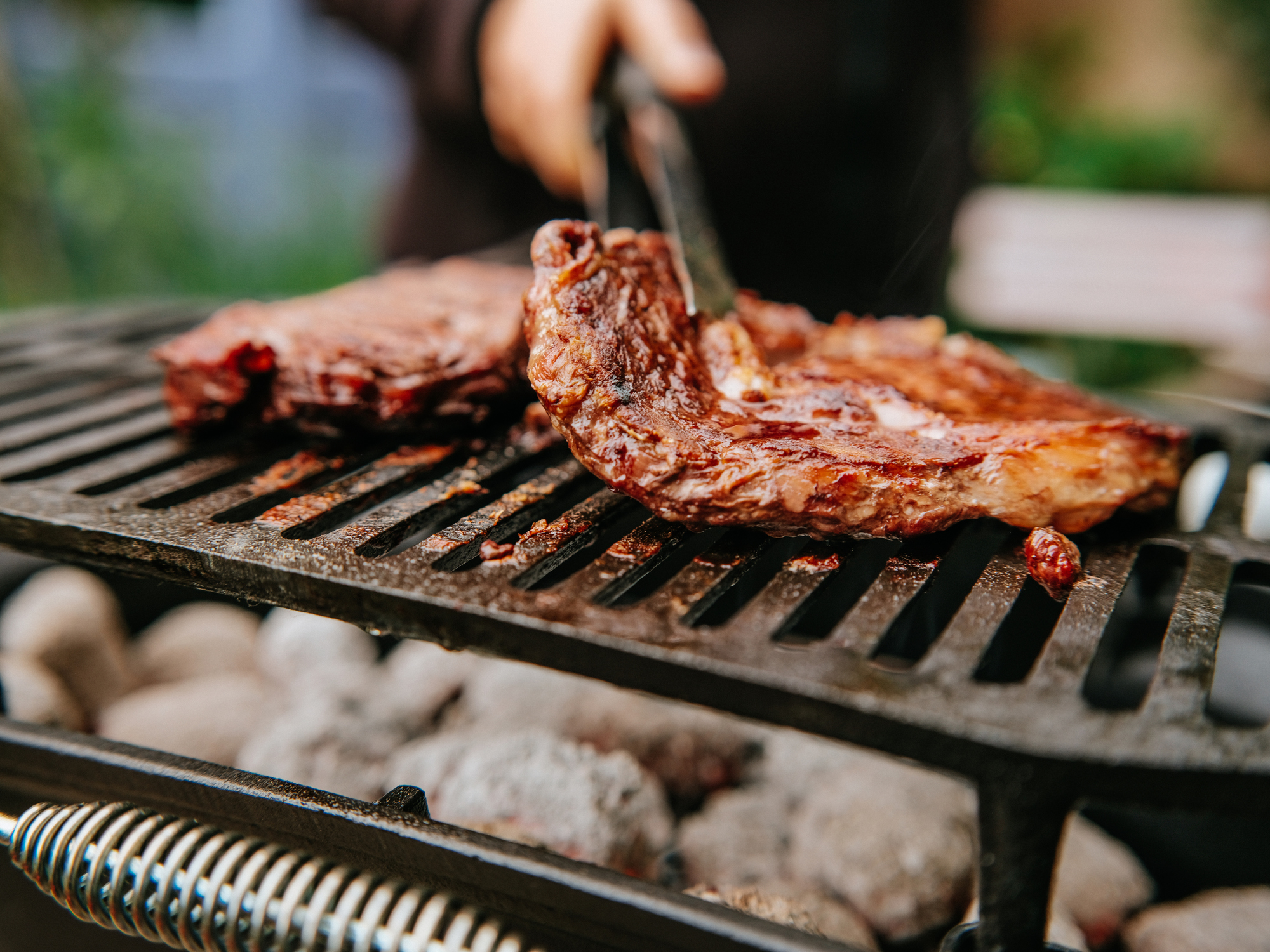 After weeks of May showers, the last bank holiday weekend is finally looking promising.

And what better time is there to get out the grill for a BBQ than a bank holiday?

Especially now that gatherings with people are easier to have.

Mike Reid, culinary director of Gaucho, has teamed with with Aldi as part of their Raising The Barbeque campaign to share his top BBQ tips – from pre-cooking to the clean up.

Here’s what you need to know to make your next BBQ the best one yet.

Invest in the right tools

Before you even get started, make sure you have a great pair of clean tongs and spatula.

Mike says to find good brushes and spray bottles to apply marinades while cooking, or to create smoke on wood and coal BBQs.

‘You don’t need a BBQ fork though – they can do more harm than good when grilling as they create holes in your food and allow the juices to pour out,’ he says.

Getting the timing right before you start cooking is more important than you think.

‘Make sure you always take your meat out of the fridge at least half an hour in advance of cooking it,’ Mike explains.

‘This will ensure it cooks all the way through at the desired temperature without having to overcook it.

‘This is important when cooking meat or fish which needs to be slightly under in the middle.’

Mike says ‘moisture is where so many people go wrong on the BBQ’, and that marinades are important here.

‘Marinades don’t just add flavour, they help to keep food moist on the BBQ too.

‘You need to keep basting your meat and veggies in butter, oil or marinades to keep them moist.’

Spice up your veg

And while you’re thinking about marinades, remember they aren’t just for meats.

‘A dry rub or marinade will turbo charge the flavour of the food you’re cooking,’ notes Mike. ‘They’re not just for meats, but veggies too.

‘Cooking over flames is a great way to extract flavour from vegetables. I am a firm believer in going against the trend of cutting your vegetables small for the grill, I think it’s much better to leave them bigger or even whole and cook them for longer on a gentler heat to really extract their flavour.’

Mike says it’s ideal to have a BBQ chimney, but if you don’t have this, ‘a great little hack I use when out on the road or camping is to simply scrunch up a piece of paper towel, cover in vegetable oil and then light in the middle of your coals.

‘It burns hotter and longer this way and will kick start your coals.’

The flame is the make or break of cooking meat perfectly.

‘If cooking with coal or wood, once lit, don’t rush to cook on them – give it time to die down,’ Mike says.

‘You need to wait for them to fully ignite and turn white. That is the best time to start cook, and when you should add your food.’

When cooking steak, remember that each cut needs to be cooked differently.

‘You want that beautiful caramelisation on the first side. Whereas if you have a leaner cut like fillet or rump, you want a gentler heat to cook over as you don’t have much fat to be rendering.’

He suggests: ‘Try using wood chips, especially when cooking fish – smoke and fish go hand in hand. Adding woodchips to your coals is a great way of getting extra smoke on to your food, enhancing the flavour considerably.

‘If you soak them first in water, it will slow down how quickly they burn and generate more smoke.

‘Choose what type of woodchips you will use depending on what you cook; apple wood is mild and fruity and goes well with pork, cedar is strong and is best for smoking fatty foods for example.’

Pimp up your salads

‘Try adding some BBQ fruits to your salads for an interesting twist,’ says Mike.

‘Always go for what’s in season for the best flavour and price but some of my favourites include peaches, watermelon, mango, apple and pear.

‘To cook, don’t add any fat, just let the fruit release its natural sugars which will caramelise it. Then just add to a nice peppery salad, using watercress or rocket, perhaps a little goat’s cheese or burrata and your guests will be blown away.’

For the bit people enjoy least, Mike has some hacks to make it easier.

‘To clean your grill, spray with vinegar, leave for about 5 minutes and then scrub clean with some scrunched-up foil.

‘Brewed coffee is also a great way to tackle grease on your BBQ, given its level of acidity. Just pour into a large basin and soak your grates for around an hour.

‘Rinse with warm water, and they will be good as new. This also works for utensils.’