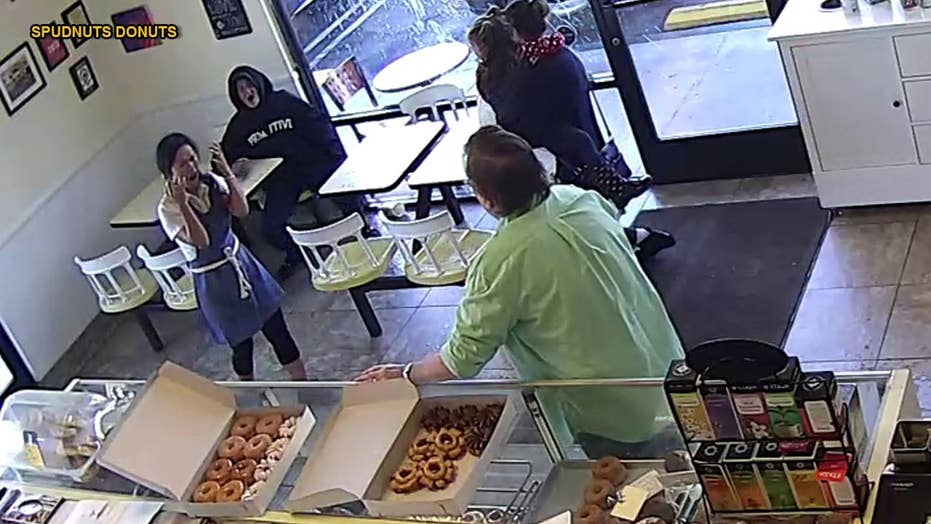 A homeless woman was caught on tape, throwing hot coffee in the face of a doughnut shop owner. In the security footage of the incident, Cindy Seam, the owner of Spudnuts Donuts, can be seen arguing with the homeless woman after becoming concerned her behavior was frightening other customers.

A homeless woman has reportedly been arrested for throwing hot coffee at a doughnut shop owner’s face while inside the store this weekend.

In the security footage of the incident, Cindy Seam-Kao, the owner of Spudnuts Donuts in Canoga Park, Calif., goes up to the homeless woman to ask her to leave after creating a disturbance.

“Just being loud. Wailing. Scaring the little girl. And that’s what concerned me,” Seam-Kao said to CBSLA.

While Seam-Kao said the homeless woman, who comes into the shop from time to time, has never been a problem before, Seam-Kao was concerned her behavior was frightening the other customers and asked her to leave.

“I did not expect for her to throw coffee at me,” Seam-Kao said to CBSLA.

Other employees come and force the woman to leave the shop.

Seam-Kao said she has filed a police report with the city, but feels nothing will be done because of the homeless problem in Los Angeles.

“It feels like we have less rights than they do,” Seam-Kao said of homeless citizens, noting she has been sympathetic to those in need and has several homeless customers. However, this incident may have her practicing more caution with who she allows in the store, she said.

Homelessness is a large problem in Los Angeles, which had a reported 52,765 sheltered and unsheltered homeless individuals living in the major metropolitan area as of May 2018. However, according to data from the Los Angeles Homeless Services Authority, 2018 is the first year in four years that homelessness did not rise.