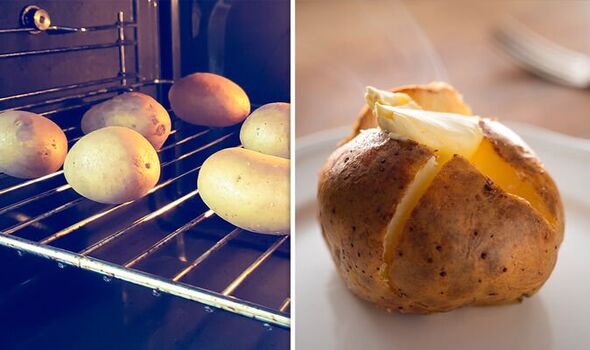 With the cost of living crisis in full swing, many are looking for new ways to cook their favourite winter meals. Using an oven to bake a potato is not only time-consuming but also costly as it is one of the most expensive home appliances to run. The microwave and air fryer, on the other hand, are two of the cheapest. Here’s how to make a jacket potato in just 15 minutes.

Mob shared a quick method for making jacket potatoes in the air fryer on TikTok.

The video began with: “I want to make a jacket potato for lunch and I’m going to use the air fryer.

“I haven’t done this before so I’m going to start off like normal, poking and then putting it in the microwave.”

The raw potato was pierced many times with a fork all over before being placed in the microwave for seven minutes.

@mob What should I air fry next? #jacketpotato #potatotok ♬ original sound – Mob

“This has had six-seven minutes in the microwave – it’s quite squishy,” the video explained, showing the potato was virtually cooked inside.

Next, the potato was seasoned: “Oil is a must then salt,” which was rubbed all over.

“Seven minutes in the air fryer let’s see what it’s going to do,” the video continued.

After seven minutes, the potato was removed and it was golden brown and crispy.

“I don’t know what I was expecting but it has a really nice crispy skin,” the video added.

“You can then add whatever filling you want – I went for just butter and cheese as I wanted to taste the potato [after being air fried] rather than the fillings.”

As for how successful the air fryer was at baking a potato, the video concluded: “It’s so tasty – the skin is really crispy the insides fluffy and it tastes great!”

There are a few other ways to ensure the skin is crispy when cooking a jacket potato in the air fryer.

The potato can be wrapped tightly in foil to help speed up the cooking process – aluminium conducts heat, then traps it.

Try adding a pile of salt underneath the potato before wrapping it in foil.

TV chef James Martin previously said during an appearance on This Morning that table salt is best.

And explained the science behind it: “The salt is quite important for this, it dries out the moisture from the skin of the potatoes and as they cook you get a crispy skin.”

As for what to top a jacket potato with, there are several classics; cheese and baked beans, tuna or leftover chilli con Carne and pulled pork.