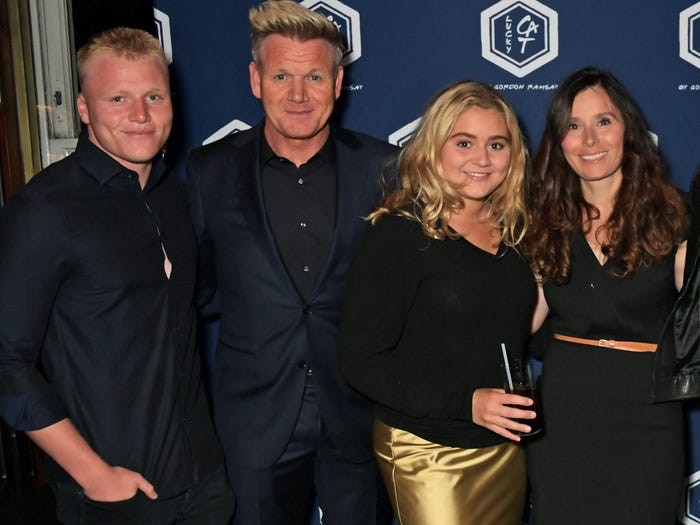 Gordon Ramsay appears to have returned to his Cornwall home as he and his family prepare for round two of the UK's pandemic lockdown, Cornwall Live reports — and his neighbors might not be pleased about it, based on how some of them reacted when he quarantined there earlier this year.

Chef Ramsay and his family spent time at their country home in Cornwall, which is 246 miles from London, during the spring and summer months this year. His earlier trip sparked controversy with locals as the temporary move and his public outings while in Cornwall conflicted with the rules of the first COVID-19 lockdown, which took effect on March 23 and began to ease up in May.

"Happy first Monday lockdown @oscarjramsay this time it's going to fly by!" Ramsay captioned the photo of his toddler.

Ramsay's daughter, Matilda "Tilly" Ramsay, also appeared to confirm that the family is currently in their vacation home when she posted a photo to Instagram of celebratory balloons for her and Ramsay's joint birthday celebration there on Sunday. She'd last posted a photo in London on October 7.

Ramsay is well aware of the new lockdown measures. According to Hello!, on November 4, the chef posted a heartfelt video informing followers of his UK restaurant closures due to the lockdown and apologizing for the cancelled reservations, noting that they were set to reopen on December 2.

"London …. we may be saying goodbye for now. However, we can't wait to see you in December," the celebrity chef captioned his post.

Based on the timing of the posts, Ramsay and his family appear to have departed London for Cornwall just as the second lockdown went into effect

England's Prime Minister Boris Johnson announced on October 31 that the country would enter into a second lockdown to prevent the further spread of COVID-19. He said in a statement that it would stretch from November 5 through the start of December — though The New York Times reported that experts don't see that being enough time to control the outbreaks.

While the Ramsays' recent Instagram posts have received positive comments from followers so far, locals in Cornwall may not be feeling the same way (though no one seems to have publicly critiqued his return trip yet).

The Independent reported in April that the chef's Cornish neighbors took to social media to scold Ramsay's decision to leave London and travel to his seaside home even as government officials urged Brits to remain in their primary residence.

The negative comments came pouring in after Ramsay tweeted a video thanking essential workers in the UK. While some Twitter users questioned the chef's decision to move his family out to Cornwall, there were others who defended him.

"He has a home in Cornwall and if he chooses to live in it whilst this crisis is with us why is that a problem, he's not on holiday," one follower tweeted. "Don't make out that he's this or he's that, he brings a lot to Cornwall including investment and work for local people in the projects he runs."

A friend of the Ramsays told The Independent in April that the family has been spending ample time at their Cornwall home for the past 10 years and they arrived at their nearly $6 million home on March 20 — three days before the first lockdown went into effect.

The source said, "The family sees Cornwall as their family home when the kids are back from uni and Gordon is back from filming around the world. It's where they spend all their family time together, they've been spending time there for 10 years and Jack actually lives in the house there full-time too."

According to the Institute for Government, as of November 5, people in England are prohibited from traveling "within the UK except for work, education, or other legally permitted exemptions" and outdoor exercise has been labeled as "closed."