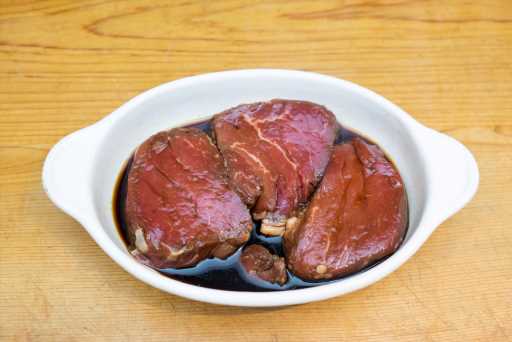 A piece of received wisdom about marinating meats is that their acidity, whether from wine or citrus juice or even vinegar, is what “breaks down the meat’s toughness.”

That, it can do too well.

The further claim — that that same acidity “makes the meat tender and juicy” — is rubbish.

It is the salt in a marinade that performs the yeoman’s service of tenderizing meat’s connective tissues or musculature, especially if delivered in a liquid — for example, soy sauce. And what carries onto and into the meat from those desired and designed flavors of a marinade — garlic or onion, herbs, chile heat or other spice — is oil. Fat is a flavor carrier in all respects, in a cooking preparation or on the palate.

Acidity in a marinade is a bit player, really, and affects merely the exterior of any piece of meat. It doesn’t penetrate, as kitchen saws have it; again, only salt does that. In fact, if the meat is exposed to acidity for too long a time (depending on the cut of meat, anywhere from 30 minutes for a boneless breast of chicken to a few hours for some gnarly ribs), acidity actually “cooks” or firms up the meat by denaturing its protein (see ceviche), or turns the meat’s surface to mush, markedly.

A bit of science helps understand the interplay of especially the salt, but also the fat and acidity, in a marinade for meat, fowl or fish.

The point of a marinade is to introduce both flavor and tenderness. Marinades, generally liquids though sometimes concocted as “dry rubs,” do this by brining meat. The osmotic pressure created by sodium pulls water from a place of higher moisture (the marinade) into a place with lower moisture (the meat).

Also because of the salt, the marinade restructures the myosin protein molecules of the meat by loosening them and creating gaps in between them that, further, fill with moisture and thereby increase juiciness. As it does that, it also seasons (literally “salts”) the interior of the meat.

Again, beware: That same osmotic pressure does a sort of push notification of the marinade’s acidity into the meat and, to carry the analogy, spamming it into chalky mushiness if left in contact with the meat for too long.

In a marinade, then, keep the ratio of fat and acidity about 1:1, never skewing higher than that in favor of acidity. And err on the side of caution with time so that any acidity doesn’t veer from help to harm.

Finally, salt with abandon, even pumping up the effect of salt by enlisting the ancillary work of a protease (an enzyme that breaks down proteins) with the salt. Name for that? Soy sauce and its kin. “Too much salt” doesn’t worry in a marinade or, to use its alternative term, a brine. The sodium seems to stick around at just the right level.

Finally, the cuts of meat to benefit most from marinating are, of course, those with the highest concentrations of difficult-to-tenderize tissues. Chicken thighs versus breasts, for example; pork shoulder as opposed to loin, for another.

As for beef cuts, skirt and “flap” meat (both different, both the same, depending on the butcher or the region of the country) and flank meat fill the bill, as do tri-tip and hanger meat, sometimes cut and sold as “steaks” so-named. Most beef rib meat, short or long, also marinate well.

1 teaspoon each Mexican oregano and sea or kosher salt

In a blender, combine the garlic, chipotles (with some adobo sticking to them), orange juice, olive oil and oregano and salt; purée. With a firm touch, rub in the mixture on both sides of the meat and transfer to a large zippered food storage bag, then pour the remaining marinade into the bag. Seal, smooshing the marinade around the meat and pushing out as much air as possible. Set aside at room temperature for 30-45 minutes, depending on the thickness of the meat.

Position the oven rack in the center of oven; heat broiler. (Alternatively, prepare a barbecue grill.) Remove the steak from the marinade and discard marinade. Lightly pat steak dry with paper towels. If broiling, place on an oiled or foil-covered baking sheet or broiler pan. Broil or grill to desired doneness, about 7 minutes on each side for rare or 8 minutes for medium-rare.