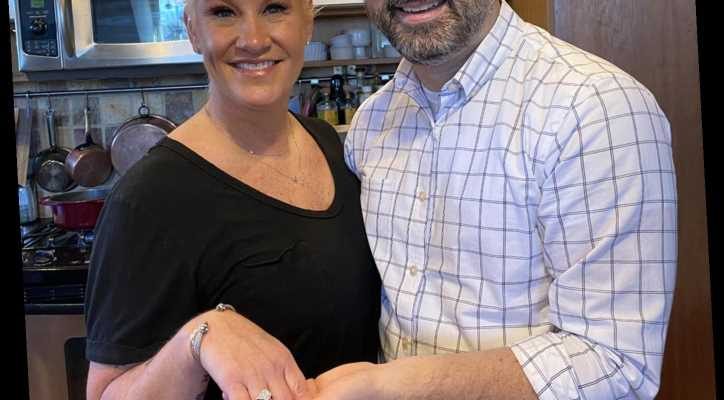 Celebrity chef Anne Burrell will be cooking up some wedding plans in the future.

Burrell, 50, is now engaged to Stuart Claxton, 48, the Food Network star tells PEOPLE exclusively. Burrell met Claxton, who works in ad sales marketing at Univision, in 2018 through the dating app Bumble. Claxton popped the question in her hometown of Cazenovia, New York, where the two are currently isolating with Burrell’s family.

“My mom and Stuart got together and made a plan where he and I were going to have a date night,” says Burrell. “She set up a beautiful table in her apartment and we just planned a dinner for the two of us. We were having a nice time, and Stuart then starts saying, ‘Oh, this is a good song to put on a playlist for our wedding reception.’ And I’m like, ‘Okay, sure. But why are we talking about that now?'”

“We started talking about family and just how nice it was to be here with everyone, so I sort of started getting weepy already,” she adds. “Then Stuart pulls a ring out of his pants pocket and I was like, ‘Oh my gosh, I can’t believe this is even happening.'”

Claxton says he started planning the proposal before social distancing measures were put into place due to the coronavirus pandemic. “I got the ring right before we left for Cazenovia [over a month and a half ago], when we didn’t really know how long things were going to go on,” he says. “But I’m very glad I did it.”

“I think some silver linings come out of this whole situation,” adds Burrell. “If it wasn’t happening, we wouldn’t be up here with my family, and they would not have been involved in the way that they were.”

Burrell, who has never been married but was previously engaged to fellow chef Koren Grieveson in 2012, says they “both knew immediately” that they were right for each other the first time they met. “I don’t know if we had both thought of marriage, but we both were like, ‘Oh, yeah, this is something. This is really going to be real and this is going to turn into something.'”

“Once you get to be a woman of 50 years old, you don’t really think that marriage is going to be on the plate for you,” she adds. “I was always really focused on my career and marriage was never a huge thing in my life that I was looking for. Then when I met Stuart, my opinion about all that changed.”

Given the current climate, Burrell says they’re holding off on wedding plans and enjoying the moment. “Everything is so up in the air right now, so we haven’t even really thought about it,” she says. “We’re just basking in the joy of this because that’s all we can do for the foreseeable future.”

While social distancing with her family, Burrell has been sharing simple, crowd-friendly recipes on Instagram. “We’re a group of nine people altogether, and we have two vegans and one gluten-free—so that has caused me to be a bit creative,” she says. “But I think everyone’s being creative in the kitchen right now. We’re thinking about stuff that can come out of your pantry. I just made a big fat chili made with only canned beans, which was really delicious and actually a big crowd-pleaser, and vegan and gluten-free. So, that ticked all the boxes.”

Burrell says she’s also heard from past contestants from her Food Network show Worst Cooks in America—which will premiere its latest season on Sunday, May 10th—thanking her for giving them skills behind the stove during this time of crisis.

“They’ll reach out to me and say, ‘Oh my God, thank God I was on the show so that I actually can cook something now,” she says. “It’s making me very happy.”