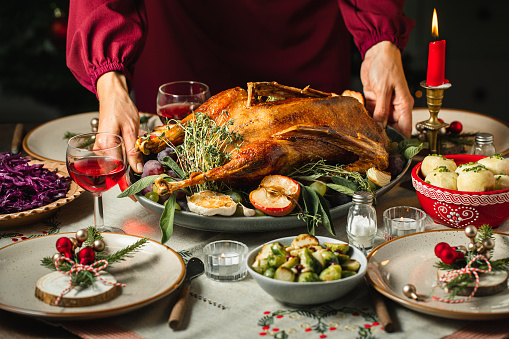 We all know turkey is the traditional Christmas bird, but they’re not cheap, and dropping a lot of cash on one single food item may not be doable this year.

And even if the bird is within budget, whether you’re vegan, vegetarian or simply not a fan, turkey doesn’t tickle everyone’s taste buds.

So, if you’re wondering what else you can tuck into on Christmas Day, we’ve got some delicious alternatives from some of the best chefs around.

If you’re a pescatarian or simply prefer fish to red or white meat, then these options could be for you.

Tom Brown, chef and founder of the Michelin starred Cornerstone in Hackney, said that fish was his go to turkey alternative this year.

Fish can be really impressive on the table and also a lighter and less rich dish compared to other Christmas staples.

Tom said: ‘Monkfish and turbot would be fantastic, but they’re expensive choices.

‘Instead, opt for either plaice or grey mullet as both are amazing and they can be easily sourced at your local fishmongers.

‘Both can be stuffed with a sage and onion stuffing, for a seasonal nod, and actually the flavours complement really well.

‘Do not stuff with sausage meat, however, as this would take too long to cook, and you would either have undercooked stuffing or severely overcooked fish!’

A particular favourite of ours when it came to turkey alternatives was vension, as suggested by Luke French, who is the executive chef and founder of Jöro.

He said: ‘Ask your local butcher to get you a saddle of venison, or loin, depending on how many you’re cooking for.

‘Marinate it in olive oil, garlic, rosemary, juniper berries and thyme, for a week if you can.

‘Roast it at 100C until the core temperature reaches 46C, then remove from the oven and increase the oven temperature to its hottest setting and pop the venison back in for ten mins to go lovely and brown and golden.

‘Serve with lingonberry or cranberry and bread sauces the same as you would turkey – absolutely delicious, trust me!

He said: ‘Another favourite of mine instead of turkey is duck.’

Luke says you’ll need a whole duck, and suggests dipping it into a marinade.

He explained: ‘Get a whole duck. Bring a pan of water to the boil with a cupful of red wine vinegar, a cupful of brown sugar and a cupful of honey in it.

‘Dip the whole duck in the boiling liquid ten times, ten seconds per time. After this, cool and chill the duck.

‘Score the skin, colour it in a dry pan first to render the fat then roast it at 100C until the core temperature reaches 45C.

‘Remove from the oven and increase the temp to the hottest it will go, and roast it for ten to 15 minutes to crisp up the skin.

‘The dipping process helps break down the fat and silver skin underneath it, so it becomes beautifully tender.’

James Cochran, executive chef and founder of 12:51, and inclusive sports bar, Valderrama’s said that opting for goose could make for a memorable Christmas dinner.

He said: ‘Despite being a traditional bird, it has fallen out of fashion with the rise of the supermarket readily available turkey.

‘Christmas is the season for an abundance of decadence and richness, so if you want to lean into this, goose has you covered with its gamey and meaty notes that marry so well with spice.’

Method for the legs:

Method for the crown:

Want to know how to use up the leftovers? Put it in a boxing day sandwich with chilli jam and left over brussels sprouts.

Sometimes when attempting something as daunting as a whole Christmas dinner, it can be good to stick with what you know. And for a lot of us, chicken is a familiar friend.

Giovann Attard, executive chef of Norma London said: ‘I would go for a large whole chicken, debone it and open it flat skin side down on foil – it’s not too difficult, you can probably find a YouTube video on how to do it.

‘Then I would make a pork mince stuffing with sage, garlic and breadcrumbs, and layer that on top of the chicken.

‘Place three or four boiled eggs on top, that were cooked for five minutes, so that they are nice and soft on the inside.

‘Then wrap the chicken into a roll, as you would if you were doing a roly poly – make sure that the aluminium foil is wrapped around it and close it at both ends.

‘Roast the stuffed chicken roll in some chicken stock for around 45 minutes, and after, leave it to rest.

‘Before serving, remove the foil and place in the oven for a further 15 minutes on 200C to get a nice crispy chicken skin.

‘Once ready, slice it all up and serve with loads of gravy and all the trimmings.’

And finally another fish alternative which you may already have on your Christmas food shopping list.

Salmon is often used for canapes at Christmas as well as breakfast – so why not munch on it for dinner too?

Jack Stein, executive head chef of Rick Stein Restaurants said: ‘My preferred alternative for Christmas day is always fish – if you really want a showstopper, then a salmon en croute.

‘You can do it with half or a whole salmon, buy puff pastry from the shop and then make a sauce with some sparkling wine, butter, cream and tarragon.

‘You could also do something like monkfish with Parma ham and sauerkraut.’