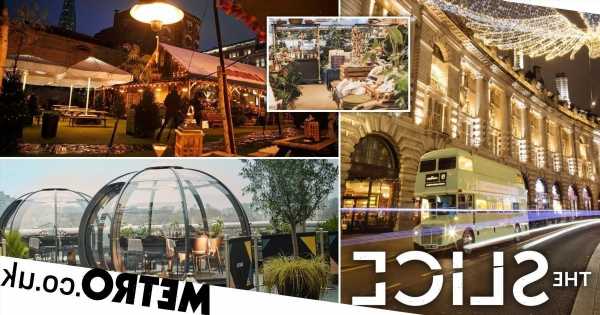 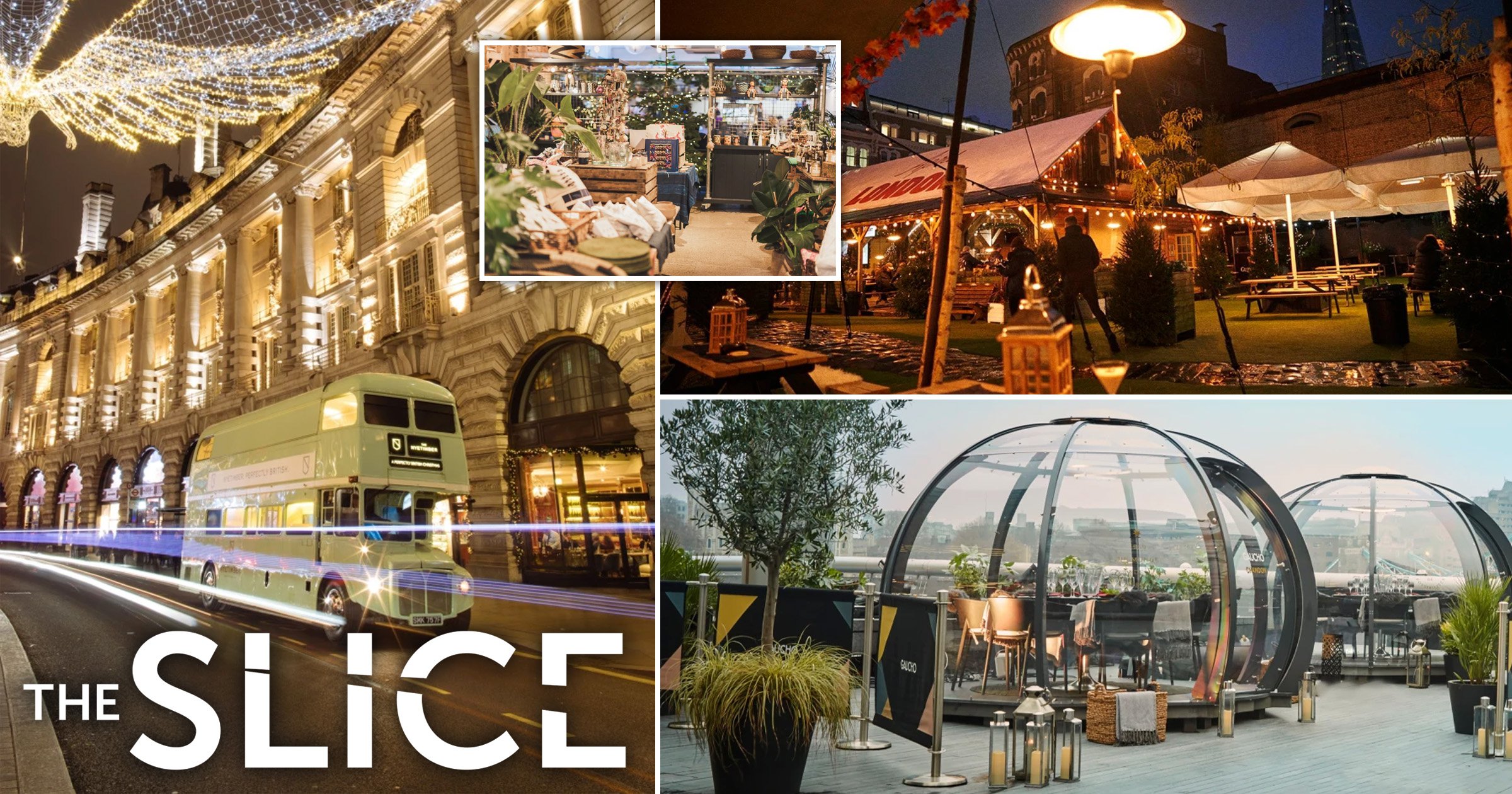 It’s not even December yet and we’re already having to rope in flatmates to help us squeeze into our jeans — and no wonder with all the food and drink and drink (oh, did we already say that?) out there washing us towards Christmas!

There are winter wonderland experiences at Flat Iron Square, Wild By Tart and Between The Bridges (you’d better try all three in the name of, er… research!), new scoffing igloos at Gaucho, drinks and decs at Andaz, some (*whisper it*) secret cocktails at The Dorchester — and a bus that might just bag you a meal at Bluebird Chelsea.

At this rate, you might have to roll us into Christmas!

Jingle all the aprés

Fancy walking in a winter wonderland? How about eating and drinking alcoholic beverages in one? Where do we sign up?!

That’s what’s being promised down at Flat Iron Square, where the whole eating/drinking/socialising space has had a Christmas makeover, transforming it into a Winter Garden complete with a Cîroc vodka chalet (among our favourite kind of chalets, especially when it’s done up like a Scandi ski lodge), a new winter cocktail menu (well, they do have that Cîroc) and bookable Christmas booths!

Plus there are shows to take in, from big band Das Brass to live DJs and hip hop karaoke. Add all your usual food outlets and we’re already slipping into our thermals so we can make it a late one.

Until December 23, every day but Monday, 53b Southwark Street, SE1

Hurry, there’s not much time to get hold of the most beautiful countdown to Christmas — the YOU Beauty Advent Calendar 2021.

It’s brimming with 24 premium products, all carefully selected by our beauty director Edwina Ings-Chambers, including top-quality goodies from leading brands such as Emma Hardie, Balance Me, Aromatherapy Associates, Medik8, Prai Beauty and Ren — to name just a few!

And we’re not just talking samples either — there are plenty of full-on, full-sized bottles for your buck. With the contents totalling a cool £299.99, we’ve got a special deal just for YOU…

Mince pies and mulled wine are all very well — it’s where we get 85% of our calories come Christmas — but how about choux buns and chocolate pecan brownies washed down with hot chocolate and a mulled wine chaser?

That’s what’s on the menu at the Wild By Tart Christmas Fair, where shopping, eating, drinking and crafting come together, with brands such as Molly Mahon, Wilder Botanics and Sirplus clothing hawking their wares while winter wreath-making workshops are conducted (with accompanying mincies and mulleds) and kids can be got rid off — sorry, we mean entertained! — at gingerbread-decorating sessions. No need to book and just £2 to get in!

Down at Between The Bridges, the south bank’s biggest beer garden, they don’t need the excuse of Christmas to get jingly with their bells.

But seeing as the festive season is nearly upon us, they’ve pulled out all the stops this year by launching Electric Winter — ‘a Christmas wonderland like no other’! — and that means new heated undercover venues (as in ‘inside’, not ‘in disguise’!), namely St Nick’s, The Jingle Bell Bar, The Spiegeltent and Rudolph’s.

Expect to eat (from Born & Raised, Burger & Beyond, The Mac Factory etc), drink and be very merry in the company of acts from Guilty Pleasures to Abba-esque, as well as drag brunches with RuPaul stars. Now that’s our kind of festive.

Today until December 23, every day but Monday, Queen’s Walk, SE1

Igloos yourself in a dining dome

When is outdoors not outdoors but sort of indoors? When it’s in an igloo! The kind that Gaucho have come up with in Canary Wharf!

Just book yourself a private dining pod — it’s an igloo-type thing, a transparent one so you can take in the views of the Thames — and you can tuck into what Gaucho does best (steak, obvs!), with a bottle of Pommery champagne to help it go down.

And don’t worry about the weather: in your igloo you’ll have toasty heaters, sheepskin throws, hot water bottles and cosy blankets, and you get full control over your music and lighting while your designated waiter looks after everything else. Perfect for intimate Christmas parties or what?

Dare to bare your baubles

Remember Drink, Shop & Do — that little bar in King’s Cross where they’d put on daily ‘dos’ so you could make or learn something while you drank?

Well, you should, it was ace.

Anyway, now the DSD lot have teamed up with Andaz — you know, only the hippest hotel on Liverpool Street — for a Christmassy-as-they-come event in the swishy surroundings of its 1901 ballroom.

The idea is you come along and get creative with origami baubles, raffia pom poms and the like, to create Christmas decorations (while you drink a complimentary Campari, so god help us all!) fit for display on their iconic hotel lobby tree — and OK, one or two to brighten up your gaff too.

If you don’t leave plastered — in glitter, people, keep it classy! — we can’t help you.

There is nothing fancier, swankier or more delicious than The Dorch. Fact! And to help Dorchester bar manager Giuliano Morandin celebrate 40 years at the hotel — that’s a whole lotta drinks! — we are more than happy to get dressed up to sample three of his secret off-menu cocktails.

Just mention ‘Giuliano’s Jade’ at the bar and you’ll be served up one of the very first concoctions the master mixologist created way back in 1981. How does he achieve that perfect shade of jade, you ask?

Also available are the Martinez, a favourite of Morandin’s and often considered the precursor to the Martini, plus more recent creation The Perfect Ten, Giuliano’s own impeccable take on the Martini. We feel squiffy just thinking about them…

Until November 30, Tuesday-Saturday, The Bar at The Dorchester, Park Lane, W1

A Nyet to remember

Have you got your eyes peeled and your phone in hand? Because if you do and you manage to spot a certain spearmint-coloured Nyetimber Routemaster bus on its way around London, then you could be in the running to win a bunch of Christmas goodies from the purveyors of this quintessentially English sparkling wine.

Catch it at the National Theatre from November 26-28, just to familiarise yourself with what it looks like, then it’s up to you to snap it on its stately progress around town until December 2.

Just point, shoot and Instagram. And the prize? Three courses for two at Bluebird, two tickets for Hex, the National’s take on Sleeping Beauty’s bad fairy, and a magnum of Nyetimber Classic, complete with an ice bucket and stopper. Christmas, sorted.