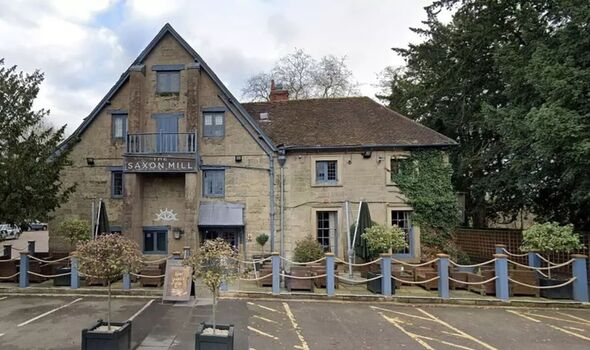 A family says their “Christmas Day was ruined” after waiting one hour for their booking at a restaurant – only to give up and travel home to have jacket potatoes.

The guest, under the username roff on TripAdvisor, said they had arrived for the 3.45pm reservation at Saxon Mill in Warwick, only to join a queue of people in a “cattle area”.

After waiting one hour in total, the family left the gastropub and travelled the 30 minutes home to have spuds instead.

Writing their review on the website, roff said: “Just awful from Start to finish. 3.45pm booking. Arrived at 3.30pm to find a queue outside and a bunch of people gathered in a cattle area! Bad vibes all round as they had all been waiting a long time already. Overall we waited an hour and in the end asked for a refund and went home (30 minutes away) and had a jacket potato.

“Completely ruined our Christmas day. We have been out many times for Christmas day dinner and cheaper than this place and NEVER have we been treated like this. The poor waitresses were running around and not one senior member of staff addressed us waiting. People that had managed to eat something walked past us and said good luck.
Many asked for refunds, walked out mid meal and said said the food was coming out wrong and cold.

“When we were about to leave we were approached by someone and he said that they were short staffed as lots had rang in sick.
Well you would know at the start of the day how many staff you have surely so even though we would have been angry if you had called us to tell us the situation, you should have given us the choice and had we of known earlier, we could have organised something else. Also you should have over staffed to avoid this.

“Won’t be back here again on principle.”

Saxon Mill is a Mitchell and Butler’s establishment, in a former 12th century mill.

It used to be a Harvester under the company’s management but it was refurbished in around 2008 and became one of Mitchell and Butler’s high-end Premium Country Pubs establishments.

While the family, from Northampton, were disappointed, many others enjoyed their Christmas Day experiences at the restaurant.

They too took to TripAdvisor, praising the service, food and atmosphere.

One person posted: “Travelled down from Scotland to have Xmas meal with family. They had picked the restaurant and it was a great choice. Food and service on pint and a beautiful old building.”

Another shared: “We were blown away by the building and its setting. A lovely meal ensued, served by cheery staff, with a smile and helpful advice. A real treat for all the senses. Delighted. 11 out of 10.”

A further guest stated: “It was a lovely evening. We were sat in the restaurant – five of us in total, including a couple of children. The service was polite and well informed. We were given everything we ordered, and had time to talk and enjoy the evening.”

More than 36 percent of Saxon Mill’s reviews on TripAdvisor are “Excellent”.

A spokesperson for The Saxon Mill said: “We are disappointed to hear that we were unable to accommodate the family promptly on Christmas Day.

“Unfortunately, due to unexpected operational pressures including a much smaller team than we had planned for, the team working on the day were doing the best they could to cater for all guests.

“We encourage the family affected to feed back to us via our dedicated Guest Care team – [email protected] – so we can personally apologise and offer them a full refund on their deposit.