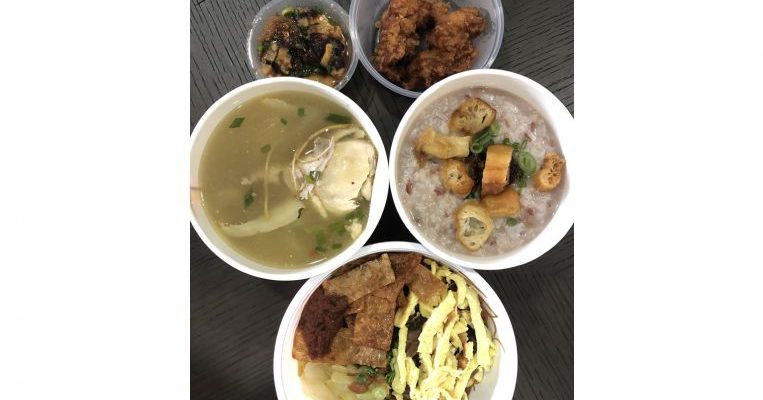 What got me sold on Empress Porridge was its promise of “a taste of home” in its online advertisement.

I have not dined at the family-owned eatery’s outlets at Fusionopolis and NUH Medical Centre before, but its menu of homey dishes looks really appealing after days of restaurant fare.

Empress Porridge ($6.80) is also the name of the signature dish, based on a family recipe that has been tweaked to include brown rice.

It’s supposed to be Teochew porridge, but is much thicker. To me, it looked somewhere between a watery mui and a creamy Cantonese jook, which is not appealing.

But its appearance is deceptive because it was really yummy. Chockful of ingredients such as dried cuttlefish, dried scallops, dried shrimp, peanuts and strips of pork, the stock was flavourful.

Topped with dough fritters and spring onion, the porridge was comfort food at its best.

You can add mini versions of some sides and the prawn paste chicken (two pieces for $2.50) I picked were moreish with the distinct flavour of fermented shrimp paste without being salty.

And I like that the eatery uses chicken thigh, which was moist and tender.

Porridge goes very well with beehoon dishes, so it was a no-brainer to get the pork trotter braised bee hoon set ($12.80) as well.

The rice noodles were fried with dark soya sauce before being tossed with boneless pieces of tender braised pork trotter.

It came covered with fried cabbage, deep-fried beancurd skin and omelette strips, plus a generous spoonful of sambal.

Go to order.empressporridge.com. Use promo code EP2020 for 20 per cent off, but you need a minimum order of $20 after the discount.

The set comes with a mini steamed egg that was good too – smooth and topped with pieces of century egg and fried shallots with a sprinkle of soya sauce.

I had to make up a minimum order of $20, so I got the ginseng chicken soup ($12.80). It was tasty with just a hint of ginseng, and the price was decent as you get two pieces of chicken , a drumstick and a thigh.

If you can’t finish it, just reheat for your next meal.