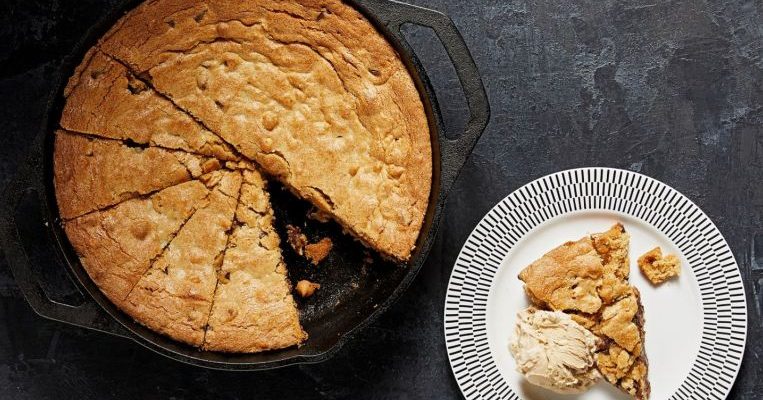 WASHINGTON (WASHINGTON POST) – What is the cookbook equivalent of clickbait? Cookbait, maybe? If you have ever been tempted by enticing cookbook names and mouthwatering photos, you know what I am talking about. And you probably know the disappointment that happens when you buy the book, make a recipe and it is only meh, if not a downright failure.

Well, there is good news – almost too good (stick with me here) – about this recipe from Chrissy Teigen’s Cravings: Hungry for More (Clarkson Potter, 2018). It delivers, and then some.

Flipping through the book (one of my colleague Bonnie Benwick’s top cookbooks of 2018), it was love at first sight when I came across these Skillet Peanut Butter Chocolate Chip Blondies. I knew this was something I had to make. You might even say I craved it. Then, when I baked it and served it to my colleagues, we devoured it. We went back for seconds, plus little furtive bites and crumbs. You might say we were hungry for more.

We were so hungry for more – almost to the detriment of sensible eating. My advice would be to make sure you have enough people on hand so that it goes fast enough that you will not be able to go back for more helpings. (The books suggests 10 to 12 servings, but the calorie count might persuade you to cut even smaller pieces.) The photo accompanying the recipe in the book encourages that kind of free-for-all, depicting a skillet that has just been dug into with a couple of spoons, amid a melting scoop of vanilla ice cream.

What exactly makes this dessert so magical? If you ask Teigen’s husband, John Legend, who chimes in on the headnote, it is the two starring ingredients. “Peanut butter and chocolate belong together and their love makes the world a tastier place,” he says. Of course, the fact that the dessert is ideally served still warm and gooey on the inside does not hurt either.

The blondie descriptor does not quite do it justice, because it is also part pie (crispy crust) and part peanut butter/chocolate chip cookie mash-up (crunchy peanut butter in the dough, plus peanut butter chips and chocolate chips). Even after all that, we did not find the finished product overly sweet, in a good way, which means ice cream should definitely be in play when you serve it. Vanilla is a classic, but we rolled with coffee, which was a very nice twist.

There is nothing else to say. Take the bait, and bake with it.

2. Combine the unsalted butter, peanut butter and both sugars in the bowl of a stand mixer or handheld electric mixer; beat on low speed until blended. Increase the speed to medium; beat for about 2 minutes until creamy, scraping down the sides of the bowl once or twice as needed. Add the vanilla extract, then beat in the eggs one at a time, thoroughly incorporating after each addition. Stop to scrape down the bowl.

4. Spread the dough in the skillet, smoothing the top. Bake (middle rack) for 40 to 45 minutes, until the crust is a little golden on the edges but the center is still soft. (The cookie might seem underdone when it comes out of the oven, but it will firm up as it cools).

5. Let cool for 15 to 20 minutes in the skillet, then cut into wedges or any portions you want. Serve warm or at room temperature.

Nutrition The nutritional analysis is based on 12 servings.