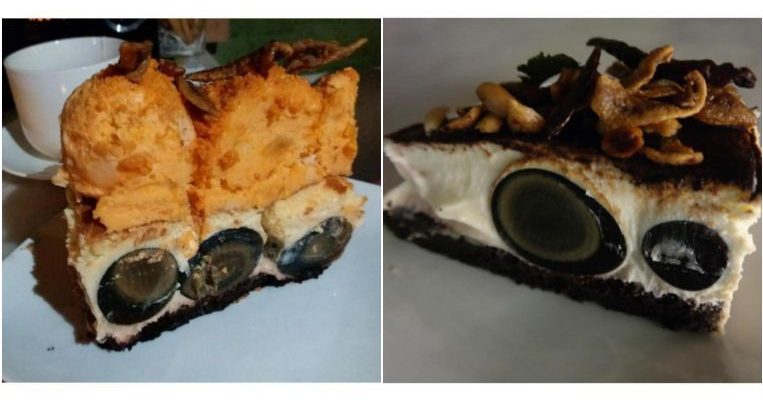 SINGAPORE – Moody Cow Cafe Penang in George Town, Malaysia, has the Internet talking about its cheesecake made with century egg in the filling.

Another Reddit user wahh43 said: “This has to be an awful prank.”

But it is no prank. The Straits Times spoke to the cafe’s co-owner and baker, Mr Sunny Chang, 58, who verified that his cafe has two versions of cheesecake with century-egg filling – Black Moon and Mystery Moon.

Mr Chang reposted a photo of the newer version, Mystery Moon, on Facebook in late April, which possibly sparked interest in his creations.

The inspiration for the cake stems from one of his favourite foods – century eggs. He says: “I also noticed how everyone loved nasi lemak and wanted to make my version of a nasi lemak cake.”

The Black Moon’s topping of ikan bilis is fried in-house.

In March last year, he came up with Mystery Moon, which has a salted egg yolk topping, priced at RM44 a slice.

He says the prices of his cakes are higher because he uses natural ingredients and avoids artificial flavourings.

The cafe has more than 30 cake flavours on rotation and, to meet demand for the century egg cheesecake, Mr Chang now offers it daily. The cafe is located at 170 Transfer Road Georgetown, George Town, Malaysia.

Mr Chang says: “I want to make cakes using Asian ingredients. Customers who come to our cafe are the adventurous type. Our cakes may sound weird, but they taste okay.”