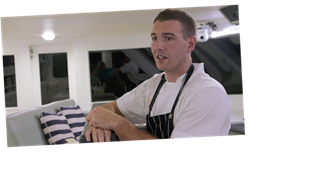 Chef Kevin Dobson and Captain Lee Rosbach have a tense meeting on Monday’s Below Deck — and PEOPLE has the exclusive first look.

The New Zealand-born cook finds himself in hot water with his boss after a blow-up in the galley with chief stew Kate Chastain and her second stew, Simone Mashile.

That fight was shown in last week’s episode, Dobson yelling at both for being late with service even thought he had prepared a full breakfast two hours before the guests had requested it. Though Dobson eventually apologized, Chastain still told Captain Lee about the argument, inspiring their face-to-face.

“I don’t babysit but I’ve got my chef being a d–k to the interior crew,” Captain Lee explains in the clip. “When Kate brings it to my attention, then I know it’s a serious problem.”

Stern as ever, Captain Lee asks Dobson about the snafu. “I understand we had a little dust up in the galley this morning,” he says. “You want to enlighten me on that?”

For his part, Dobson tries to brush the whole thing off.

“I called for food and then [Simone] just gets flustered. And then just not being prepared enough, I was a bit frustrated at the time,” he says. “But I gave her a hug and said I’m sorry, I didn’t mean to blow up.”

As chill as he may appear to Captain Lee, Dobson was none too happy.

“This is something between me and Simone and we sorted it out pretty quickly. For Kate to go up and tell Captain Lee that there was an incident pisses me off,” he confesses to audiences. “I think we both know where we stand. She doesn’t like me and I don’t really like her.”

Last week, on his blog, Captain Lee came down heavy on Dobson.

“What is up with you?” he wrote. “Kate can be your best ally or your worst enemy and you are choosing the latter. Why? You really should reign in your condescending attitude. You are not God’s gift to the culinary world, in spite of what you may think.”

“Simone didn’t deserve the grief you gave her, she could have used some help, which you seem to be in short supply of,” he added. “Take a good look in the mirror and take measure of where and who you really are. You have talent, but it doesn’t go well with a bad attitude.”