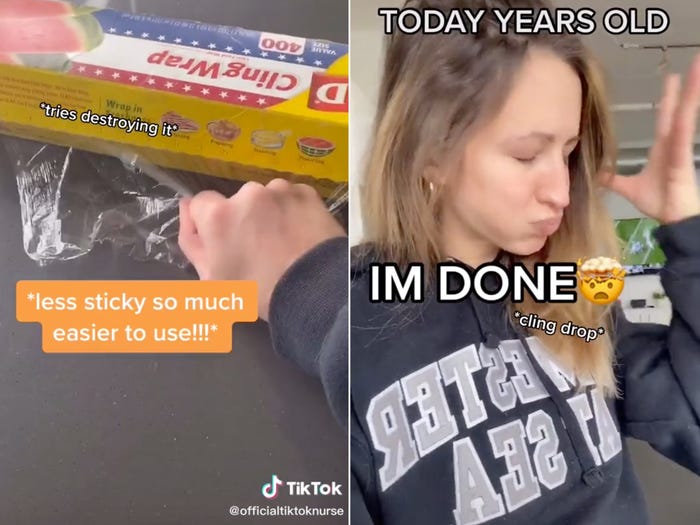 It's pretty typical for home cooks to store plastic wrap in a drawer or cabinet near aluminum foil, parchment paper, and plastic sandwich bags. But it turns out the clear cling wrap can be stored in the freezer too — and it actually might be better off that way.

TikTok user Nurse Tara (@officialtiktoknurse) posted a video showing followers what happens when you use plastic wrap after keeping it cold.

At the time of writing, the video had 2.2 million views. You can watch it here:

Tara said in the video that her aunt was the one who told her about this helpful hack after watching her struggle with plastic wrap while putting away her meal prep.

The TikTok nurse said, "She's like 'You know Saran wrap is supposed to go in the freezer, right?'"

After pulling out her freshly frozen roll of plastic wrap, Tara holds it up to show viewers that it's actually cold. "This is for the non-believers," she said. "You see it's like, cold?"

Then after trying to destroy it by crumpling some up in her fist, she easily pulls the typically sticky wrap apart. "It wouldn't have unwrinkled that easily if I didn't put it in the freezer," she said.

The one part Tara didn't show followers is whether it's still sticky enough to wrap a container or piece of food.

BuzzFeed's Krista Torres wrote about her trial of the hack. She reported the cling film was still functional.

"It was super easy to pull off and tightly stuck to a bowl," Torres wrote.

This isn't a new hack, though Tara's video has popularized it. Today Food broke down the science behind this kitchen phenomenon in 2018, reporting that the loss of cling after freezing is temporary due to molecular changes in the plastic that happen in the colder temperature.

This theory was proven by Carolyn Forte of the Good Housekeeping Institute, who, after giving the trick a test run, reported that "as it warms up, it goes back to being sticky."