We've spent the last year compiling dozens of recipes from Michelin-starred chefs, sharing everything from one-pot wonders to date-night desserts.

But when the kitchen fatigue started to set in during this very long year, we also made sure to ask our favorite chefs for simple recipes that we could whip up in a flash.

To mark the end of 2020, we've gathered 10 of our favorite Michelin-starred recipes that take 20 minutes or less — so you can spend more time enjoying your food instead.

A tortilla Española makes for a hearty breakfast in no time. 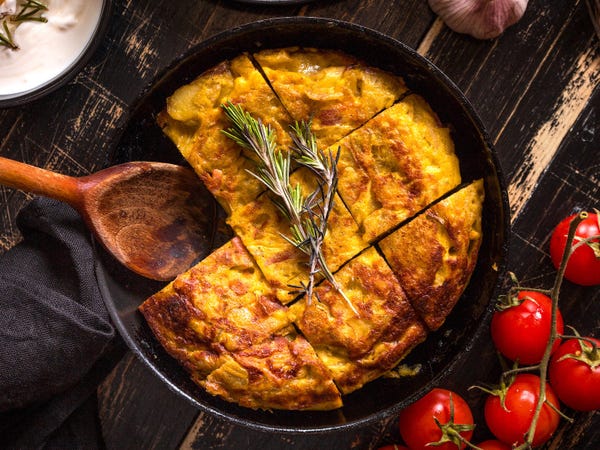 David Shim, the chef at Cote in Manhattan, often turns to tortilla Española — also known as a Spanish omelette — when he needs a quick and filling breakfast.

Shim whips the eggs so that they're ready to go, then boils or blanches the potatoes for a couple of minutes. He sautés some bell peppers and then adds the eggs and potatoes before throwing the pan into the oven and baking it for 15 to 20 minutes.

Once it's done, Shim tops his tortilla Española with some cheese or reduced tomato sauce.

You can whip up a classic French omelette with just two ingredients. 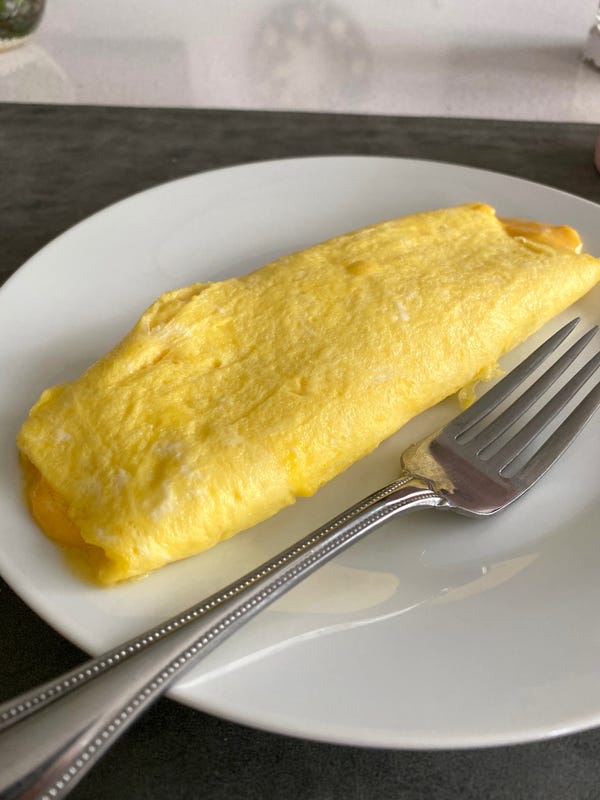 "A true and classic French omelette is incredibly simple, you just need eggs and good butter," Ryan Ratino, the chef behind Bresca in Washington, DC, told Insider. "It's a simple combination that yields a subtle and nice tender texture, and rich comforting flavor."

Ratino also recommends making scrambled eggs and toast with Kerrygold butter, a European-style butter that he loves pairing with eggs.

"It has much more butterfat content than regular butter, which makes dishes have a richer flavor and creamier texture," he said. "Then top the eggs with your favorite sweet jam for a sweet and savory contrast, and bundle it up between two pieces of toast!"

This bacon and egg muffin inspired by McDonald's is perfect for breakfast or lunch. 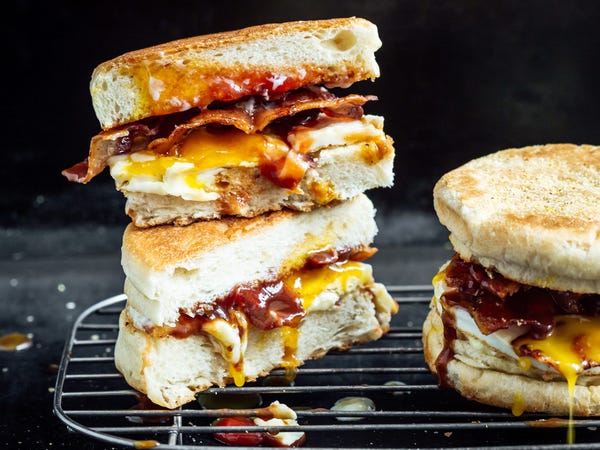 "This muffin wins every time," Greg Marchand, the chef-patron at Frenchie in London, told Insider. "It's healthier than the McDonald's version, and about 100 times better!"

Spread butter on both halves of your English muffin and heat their buttered sides on a griddle or skillet until they soften. Then turn over your muffin halves and add slices of cheddar cheese on top.

Marchand recommends adding plenty of ketchup on one half and HP Sauce on the other. Then, add two slices of bacon to the bottom half and put your fried egg on the top half with a little salt and pepper.

Or upgrade your classic BLT sandwich with a bacon vinaigrette that will add loads of flavor. 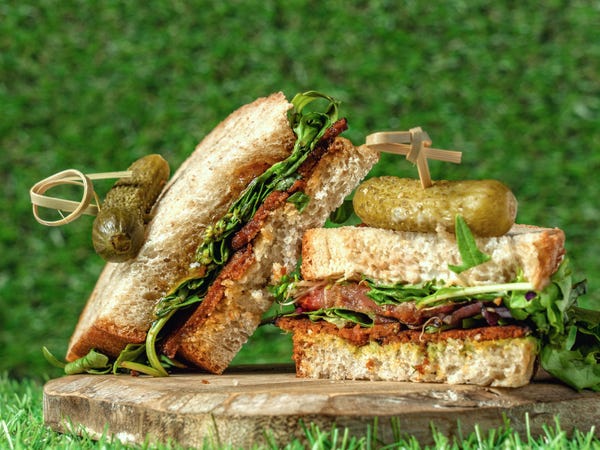 Mazen Mustafa, executive chef at Fellow in Los Angeles, told Insider that he always whips up this version of a BLT when he's in a rush and needs a quick lunch.

First, cook your bacon in a nonstick pan until it's crisp. Then, use the rendered fat to make the vinaigrette, adding 60 grams of olive oil and 20 grams of sherry vinegar.

Toast the bread (Mustafa recommends potato bread) on both sides until they're golden brown, then spread each side with mayonnaise and layer the bacon, tomato slices, and butter lettuce on top.

Click here for 8 easy sandwich recipes from Michelin-starred chefs that you can make in 10 minutes or less.

Guacamole pairs perfectly with everything and takes just minutes to whip up. 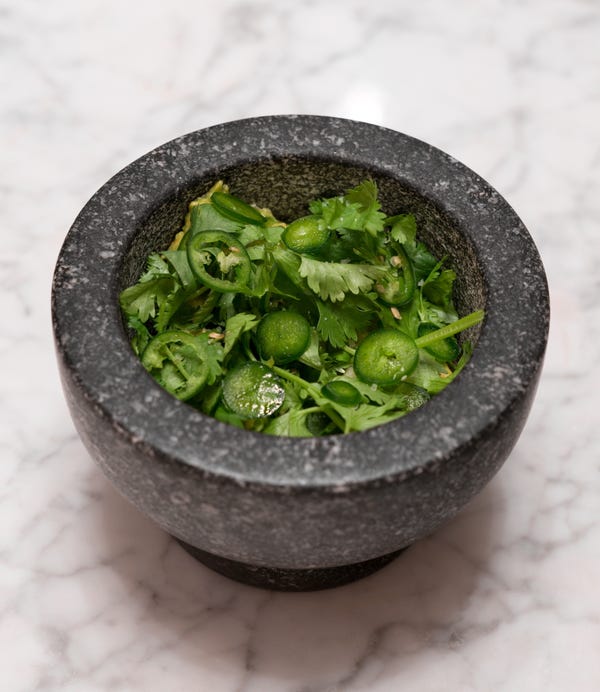 Val Cantu, the head chef at Californios in San Francisco, told Insider that he prefers to keep his guacamole "really simple."

"I just fold that all together, then get the mandoline and shave tons of serrano peppers on top and chop up some cilantro," he added. "I just choose to skip tomatoes, because they get kind of mushy and nasty."

Click here for 9 easy dishes you can make with an avocado, according to Michelin-starred chefs.

Homemade pizza doesn't just have to be for lunch or dinner — it also makes for a quick and delicious snack. 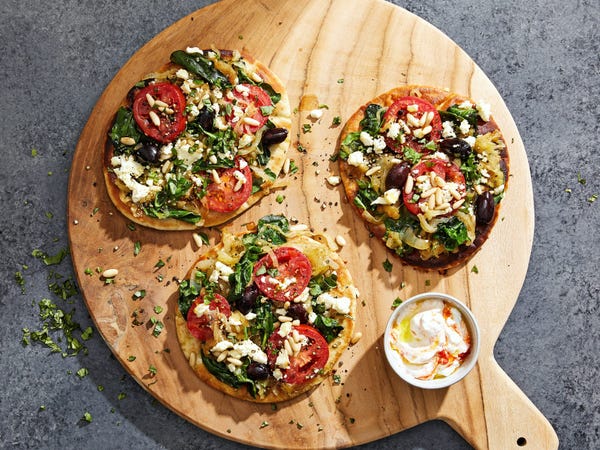 Lauren DeSteno, the corporate executive chef at Altamarea Group (which includes the Michelin-starred NYC restaurant Marea), told Insider that she loves whipping up pizza on a flatbread or lavash wrap for a filling snack.

To re-create DeSteno's favorite homemade pizza, preheat your oven to 400 degrees Fahrenheit and spread a thin layer of tomato sauce (she recommends using tomato paste) on either the flatbread or wrap. Then sprinkle your choice of seasonings. DeSteno uses garlic powder, oregano, and chili flakes.

Top everything off with a mix of shredded mozzarella and grated parmesan cheese. Bake your pizza on an inverted cookie sheet for around eight minutes, taking it out when the cheese is bubbly and just starting to brown. Let your pizza cool off for a couple of minutes before serving.

Click here for 7 gourmet snacks that Michelin-starred chefs whip up at home in minutes.

You only need 10 minutes to make a great steak on the grill. 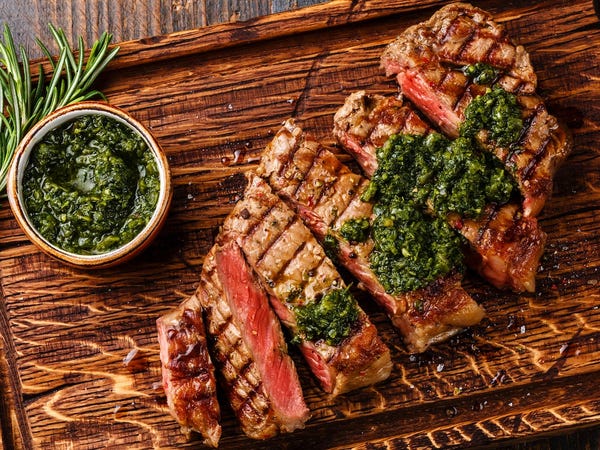 To make the perfect steak, Cantu recommends using a grill basket and putting it right on the coals to cook your protein.

"Cook the steak on one side for 10 seconds, flip it, and then do that for all the sides," he said. "Let it rest for a couple of minutes while you relax, then do that same process again. The second sear will start to caramelize it."

Once you've done all the sides for a second time, let your steak rest again and brush it with some soy sauce. Repeat the process one more time for a "perfect medium rare," or two more times if you prefer your steak medium.

"In this final sear, you're looking for caramelization," Cantu said. "The soy sauce will help, and leave it nice and salty."

Take your salmon to the next level with a soy-honey glaze. 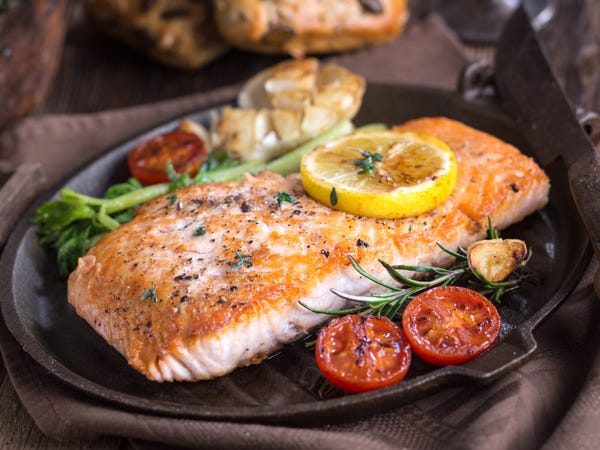 "I love the simplicity of the dish," Mustafa told Insider. "The honey and soy work great with the salmon and almost any vegetable combination you can come up with."

Mustafa recommends cooking your salmon skin side down in a cast iron pan on medium heat.

"Once the salmon is cooked on the skin side nearly 70% of the way, flip it to kiss it on the flesh side," he added. "Then remove and rest it on a plate lined with paper towels for two minutes."

To make the glaze for four fillets, add 150 grams of soy sauce, 50 grams of olive oil, 40 grams of honey, and 25 grams of sherry vinegar. Mix it all together, then use the glaze to dress your salmon and veggies.

Click here for 7 easy dinners from Michelin-starred chefs that take almost no prep.

Michelin-starred chef Josh Emett considers this carbonara to be an essential recipe in any cook's repertoire. 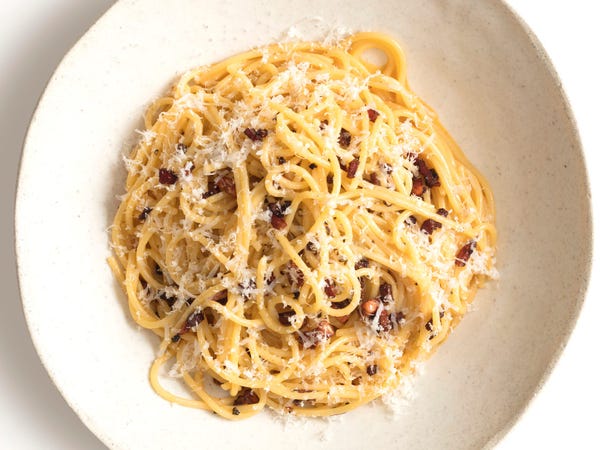 "This classic Italian dish can be knocked up in 10 minutes," Emett told Insider. "This is a dish you could make when in a hurry, or to impress friends."

All you need to re-create the recipe at home is: spaghetti, guanciale or pancetta, black peppercorns, eggs, and pecorino Romano cheese.

Combine the eggs and cheese to make your silky sauce, then toss in your pasta. Emett notes that it's important to work quickly with your pasta once it's in the mixture so that it can retain enough heat to cook the eggs without scrambling them. 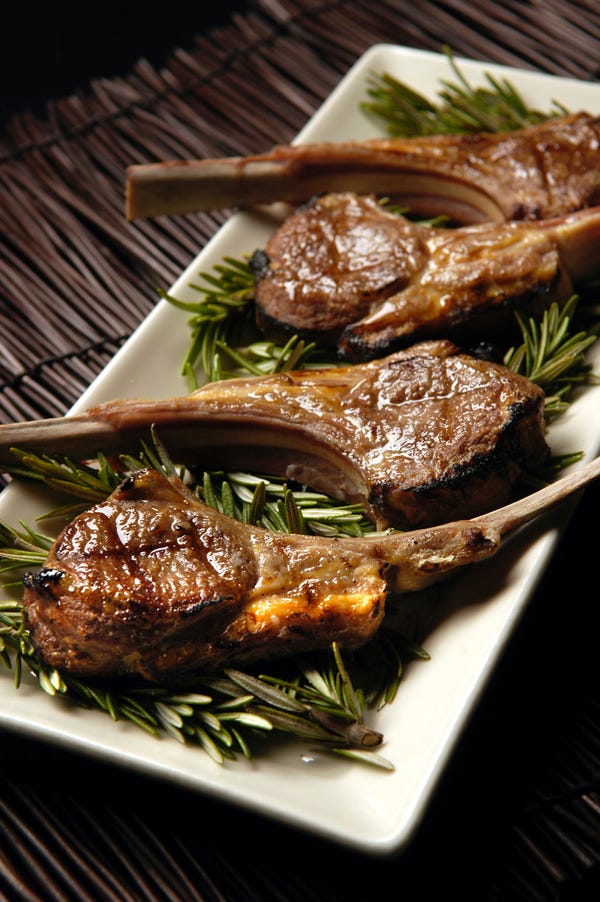 "When I cook for myself, I cook with intention," Ryan Ratino, the owner and chef of Bresca in Washington, DC, told Insider. "And I tend to go for easy but flavor-rich dishes like lamb chops, which cook quite quickly."

Ratino recommends throwing your lamb chops on the stove and panfrying them "for a few minutes on each side."

"First, I tenderize the meat with a simple marinade made with fresh herbs, and maybe a bit of spice," he said. "Then I heat a nonstick pan or skillet, cook the lamb chops, and add a cup of vegetables that can be cooked with the residual fat — giving them an extra kick of flavor. It's the perfect dinner for one."

Click here for 8 easy dishes from Michelin-starred chefs when you're cooking for one.