Temperatures have dropped, the first snow of the season has fallen, and that can only mean one thing — soup season has arrived!

So to keep you warm as lunchtime and dinnertime get a little chillier, we asked Michelin-starred chefs to share their favorite soup recipes, along with tips and tricks so you can easily make them at home.

From a comforting bowl of winter squash to a spicy sip of yukgaejang, these soups will soothe your soul all winter long.

A roasted beet soup tastes just as good as it looks. 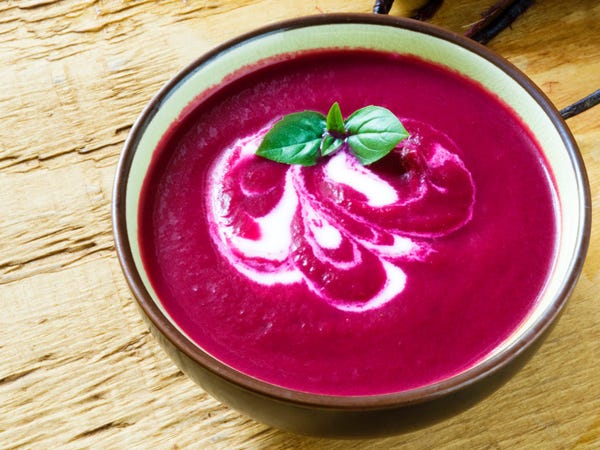 Curtis Stone  — who runs Maude and Gwen in Los Angeles — makes his roasted beet soup with chives and yogurt.

"I make it more of a creamy soup than something like a borscht," he told Insider. "You roast the beets with some onions and garlic, then purée that with a little veggie stock, or maybe even some mushroom stock. And I just finish it with the yogurt."

Andrew Zimmerman, the executive chef of Sepia in Chicago, also enjoys making roasted beet soup — which he'll pair with leeks — for an easy dinner in the winter.

"It takes kind of a potato leek soup idea, but instead of using potatoes you use roasted beets," he told Insider. "It's sweet and earthy from the beets, and it gets a little bit of backbone and structure from the leeks."

Zimmerman recommends serving the soup with some toasted country bread that has melted goat cheese right on top.

You'll be sure to warm up with a bowl of Jamaican chicken soup, which is packed with plenty of veggies and spices. 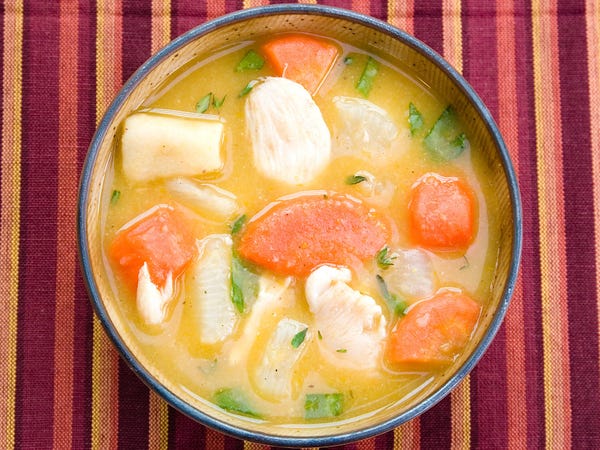 "It's really hearty and really spicy," he added. "I would say, in my humble opinion, that it's the best of the chicken soups that I've tried."

Addison recommends using either chicken feet or wings for this soup, along with chicken stock, pumpkin, and butternut squash.

"The soup also often has yams, rings of corn on the cob, and chayote," he added. "It's tons of vegetables."

Give your classic squash soup an exciting kick by adding red miso and toasted pumpkin seeds. 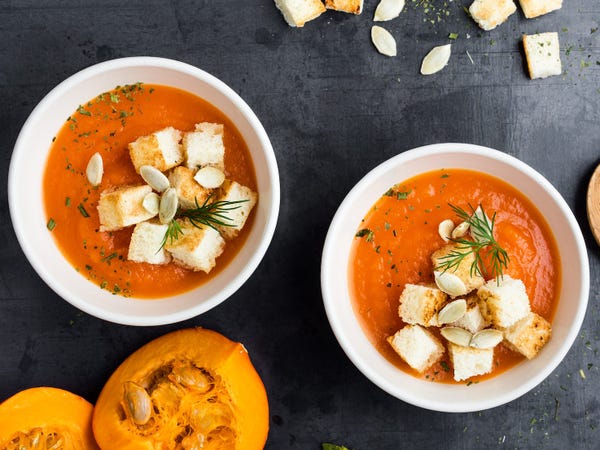 "The squash has a delicate flavor that's accentuated by the red miso," Mazen Mustafa, the executive chef at Fellow in Los Angeles, told Insider. "And the crunch of the toasted pumpkin seeds gives it great texture."

To start, add one red kuri squash (peeled, deseeded, and diced), four cloves of garlic, three sliced shallots, 35 grams of ginger (peeled and diced), and one honeycrisp apple (peeled and diced into large pieces) to a pan with olive oil. Cook them on low heat, stirring frequently (a technique known as "sweating").

Then, add 2 liters of vegetable stock and 50 grams of red miso to your mixture and simmer.

Once everything is tender, purée the mixture in a blender until it's smooth. Season the soup with salt and serve with toasted pumpkin seeds on top.

Or add some fresh herbs and wine to give your squash soup a Tahitian twist. 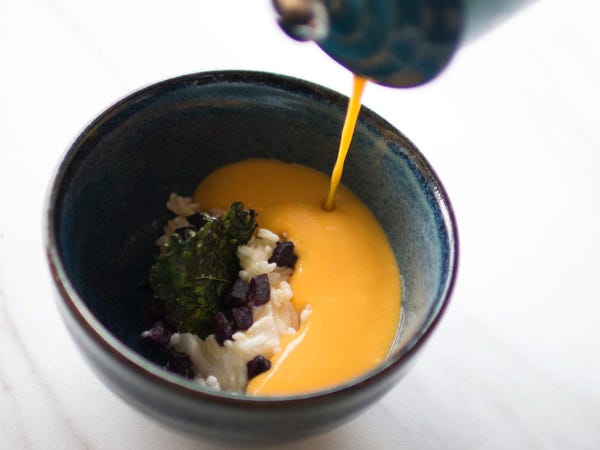 Kevin Meehan serves up this Tahitian squash soup at Kali Restaurant in Los Angeles during the holiday season.

To make the soup at home, first fill a sachet bag with sage, thyme, and rosemary.

Sweat onions with your sachet bag until they turn translucent, then add a few cloves of garlic.

Once the garlic has cooked, throw in your white wine and let it cook down. Then add your squash, along with cream and milk. Add nutmeg to taste and serve.

Chicken stock will do just the trick when you want something light and simple. 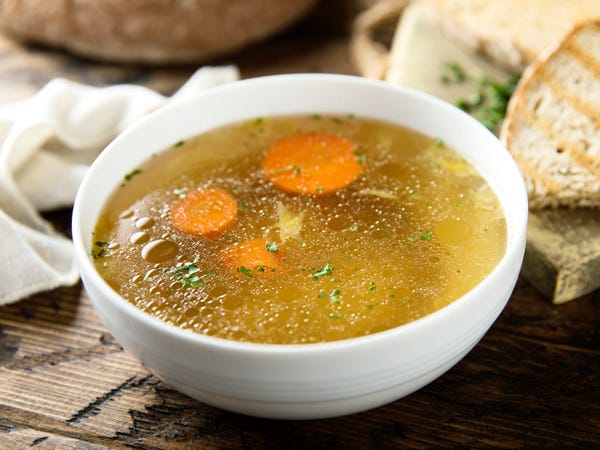 Val Cantu, the head chef at Californios in San Francisco, told Insider that he's been making a lot of chicken stock during the pandemic.

"I'll take a whole chicken, break it down into smaller pieces so it cooks more completely, and cover it with filtered water," he said.

Cantu then brings the pot to a simmer and "skims off all those impurities" from the top for the first 20 to 30 minutes.

"I do chicken stock a little bit differently than general chicken stock recipes," he said. "All I'll put is chicken and, at the end, I might add a mild seasoning of salt in case I want to use it for whatever later."

While Cantu will often add his chicken stock to rice — using it instead of water in his rice cooker — he also enjoys drinking chicken stock on its own.

"Most of the time I won't add any spices, no vegetables," he said. "If you've done it right, it's really pure and delicious on its own. I love it, it feels like a warm sweater."

You don't need a reservation at one of Daniel Boulud's restaurants to try his curried cauliflower and apple soup. 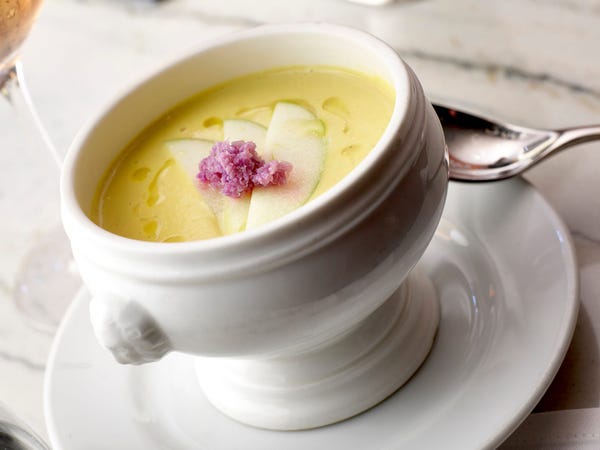 "I created this soup at Le Cirque in the fall of 1989 after receiving beautiful Hudson Valley apples and fresh Long Island cauliflower," the legendary restaurateur told Insider. "It quickly became a favorite and, to this day, the cauliflower-apple soup still makes an appearance on my restaurant menus."

Separately, melt 1 tablespoon of unsalted butter in a Dutch oven or large pot over medium-low heat. Then add 1 cup of chopped onions, 2 teaspoons of Madras curry powder, and ½ teaspoon of saffron threads (or two pinches of saffron powder) to the mixture. Sweat it for five minutes, stirring often.

Then add 2 cups of sliced apples — Boulud recommends Golden Delicious or McIntosh — and continue to cook for five minutes (making sure the apples and onions take on no color). Add 4 to 5 cups of cauliflower (broken up into small florets) and cook for five more minutes, until all the spices are incorporated.

Pour your warm chicken stock over the mixture and simmer it for 20 minutes, until the cauliflower is tender. Then add 1 cup of cream and cook for three more minutes.

Remove your soup from the heat, season it with salt and pepper, then purée the soup in a blender or food processor until it's very smooth. Strain the soup through a fine-mesh sieve and serve. Boulud recommends topping it with minced chives and raw apple slices.

Infuse your pumpkin soup with the flavors of Thailand by adding red curry and coconut. 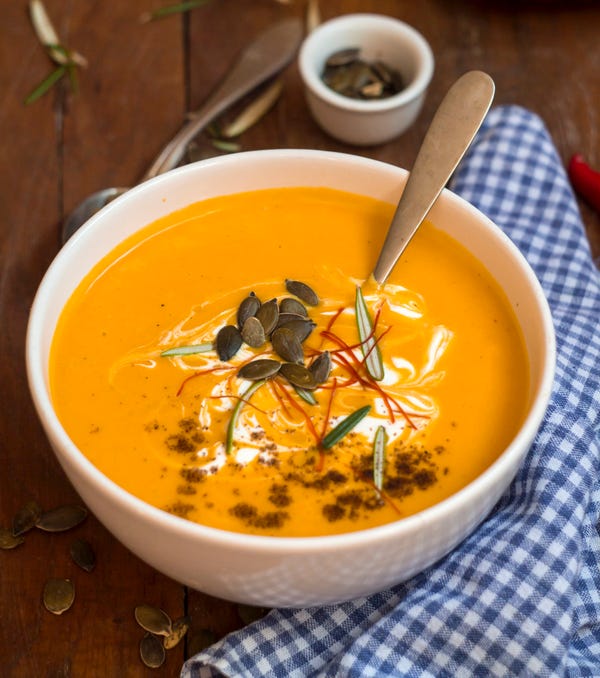 Zimmerman told Insider that he loves whipping up a pumpkin and coconut soup with Thai red curry.

"It's pumpkin, kabocha squash — or butternut squash is fine — plus garlic, ginger, coconut milk, and Thai red curry paste," he said. "So it's a little spicy, but not too much, and also sweet from the coconut milk and squash. And it's creamy and rich from all the squash that's in it."

"It's a puréed soup, so those are good because they'll add texture," he added.

Impress your family with a chestnut velouté recipe straight from a Michelin-starred kitchen. 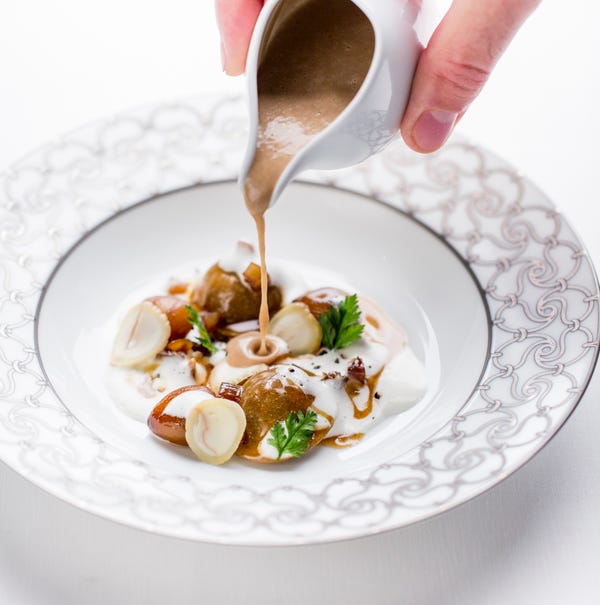 Jean-Philippe Blondet, the executive chef of Alain Ducasse at The Dorchester in London, told Insider that he believes this is the "king of soups."

"This is a personal seasonal favorite that never fails to be a hit at home and for lunch guests," he said. "It's a delicate, creamy, and warming dish — and a lunch of minimum fuss that maximizes texture and flavor."

To start, cook your chestnuts in olive oil and butter. Then add garlic and dry fennel, cover your pan, and place it in the oven at 350 degrees Fahrenheit. Cook until the chestnuts are roasted, moving them around to keep the butter from foaming.

Once the chestnuts are ready, cover them with brandy and allow them to cool. Remove the garlic and fennel.

To make the velouté — a sauce made with roux and a light stock — first cut some shallots and fennel into big chunks. Blondet recommends using one leg of guinea fowl in this recipe, which calls for it to be cut into small pieces and roasted in olive oil.

Once the meat has colored, add your shallot and fennel and roast everything together. Then add your roasted chestnuts, along with butter, garlic, black peppercorns, and dry fennel. After everything has roasted together, pour brandy over the mixture and reduce. Then add chicken stock and let it cook for 45 minutes.

When you're ready to serve, put a handful of roasted chestnuts in the middle of a plate. Add some chestnut shavings, French parsley, and crème fraîche, then pour the chestnut velouté on top. Voila!

Or pair your chestnuts with beans for a minestrone-style soup. 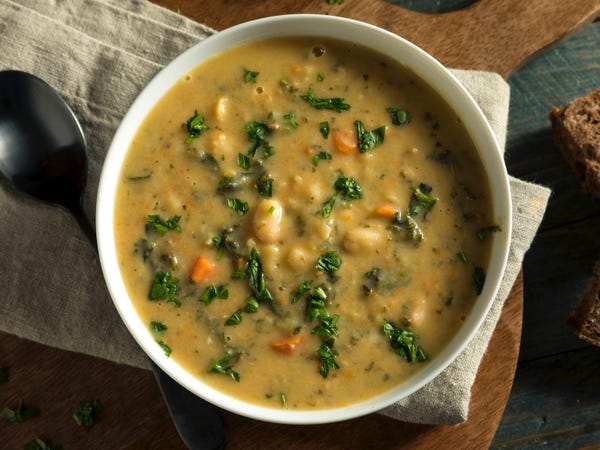 Zimmerman is a big fan of this soup, which includes white beans, carrots, thyme, rosemary, and roasted chestnuts.

"When I make it I also usually include some pancetta," he said. "But you could leave it out and make it vegetarian."

Zimmerman recommends adding your roasted chestnuts at the halfway point while making the soup so that they can "break down a little bit and enrich and sweeten the broth."

And when it comes to serving, the Michelin-starred chef said this soup pairs perfectly with some toasted country bread.

"Rub the bread with a clove of garlic, spoon the soup over it, and grate some shaved Parmigiano-Reggiano on top," Zimmerman said. "It's a soup that's a meal. It's rich, solid, and delicious."

A bowl of spicy yukgaejang will keep you warm all winter long. 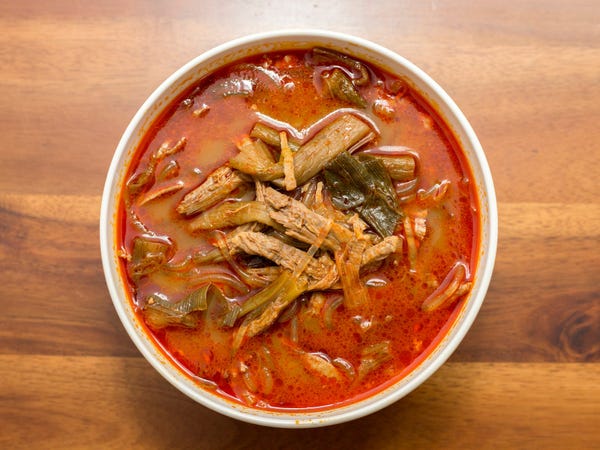 Yukgaejang is a spicy beef soup that's popular in Korean cuisine. And Beverly Kim, who runs Parachute in Chicago, always enjoys making it in this season.

"Growing up Korean, I love something a little spicy and hot that just warms me up and makes me feel really good," she said. "The endorphins and serotonin you get from chilis in the winter is really awesome."

In addition to shredded beef brisket, Kim said yukgaejang has plenty of vegetables — including large pieces of scallion.

"It's finished off with egg," she added. "It's kind of spicy, super heart-warming, and very soul-satisfying."

The Real Reason Trump Met With MyPillow Guy Mike Lindell Again
We and our partners use cookies on this site to improve our service, perform analytics, personalize advertising, measure advertising performance, and remember website preferences.Ok