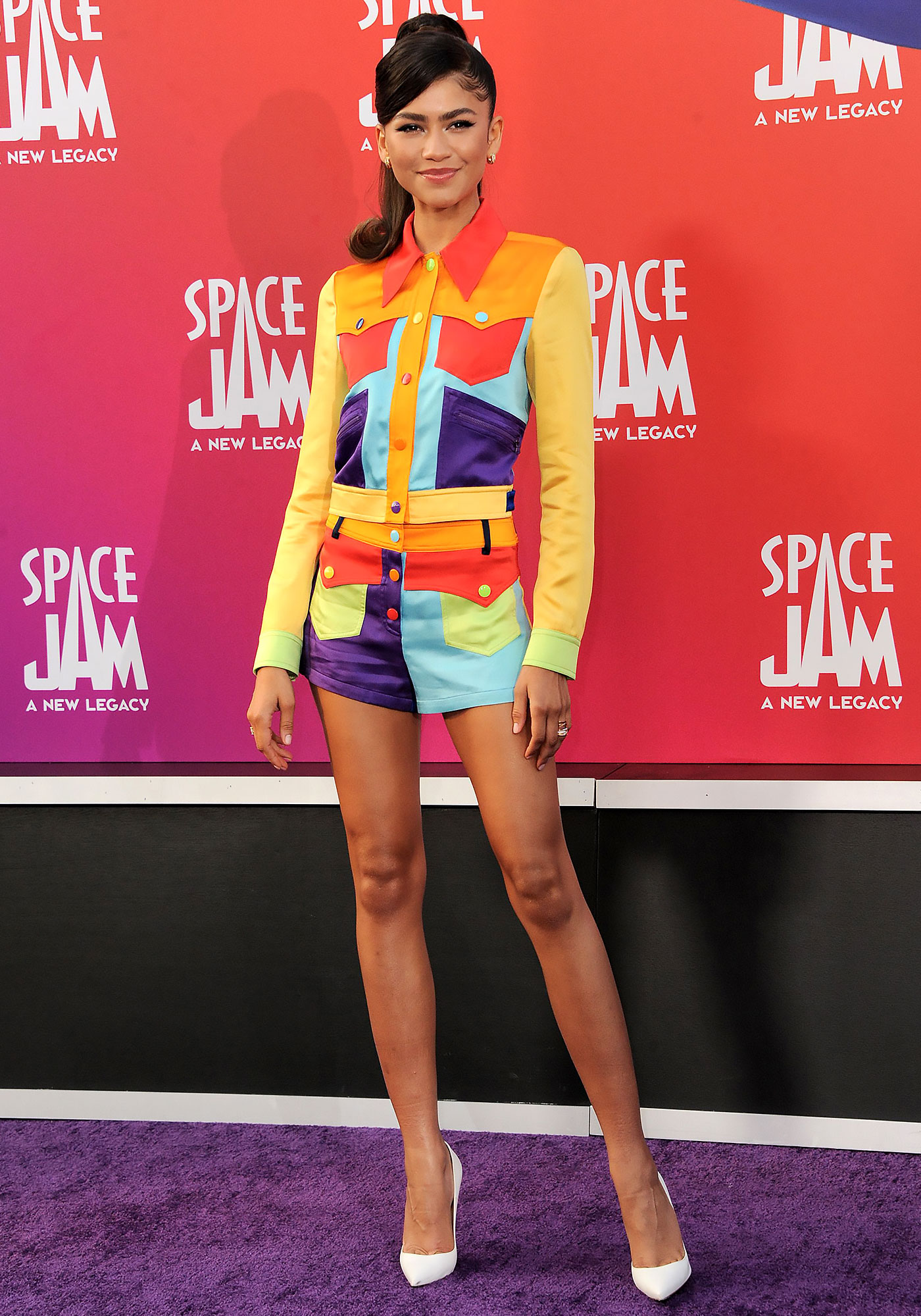 Bringing her character to life! Zendaya showed up to the Space Jam: A New Legacy premiere on Monday, July 12, and her outfit paid special tribute to the one and only Lola Bunny, who she voices in the film.

The 24-year-old star rocked a patchwork short set by Moschino with patches of blue, yellow, orange and red that most definitely parallel Lola Bunny’s reimagined costume.

Zendaya paired the look with white Louboutin pumps and earrings and rings from Bulgari. Her hair was pulled into a sleek high ponytail and, in a sweet nod to the film, she wore wore a blue face mask emblazoned with a basketball while en route to the event.

While the shoutout was pretty obvious, the Malcolm and Marie star took to Instagram Stories to drive the point home, explaining that her hair for the evening was very Lola-esque — save a bunny ear or two.

“I don’t have the ears but a ponytail is close enough lol,” she wrote alongside a picture of the animated character.

While there’s no question that style lovers were obsessed with Zendaya’s premiere look, many Looney Tunes fans weren’t as thrilled about Lola Bunny’s makeover.

For the new film, which is released in theaters on July 16, Lola Bunny has a few changes to her outfit — she’s wearing a less “sexualized” outfit sans a crop top. It sparked quite a debate on social media.

“I didn’t know that was going to happen,” Zendaya said in an interview with Entertainment Weekly. “I definitely know we love her, but I didn’t know it was going to be as much of a focus as it was. But I understand, because she’s a lovable character. She’s very important, so I get it.”

She continued: “She’s special to a lot of people and their childhoods and they’ve been able to grow up with her, so I get that sense of protection.”

Malcolm D. Lee, the director of the film, previously told EW: “This is a kids’ movie, why is she in a crop top? It just felt unnecessary, but at the same time there’s a long history of that in cartoons. I understand people don’t want things to change, but I think we needed some evolution with her, not by objectifying her but by making her strong and still feminine.”