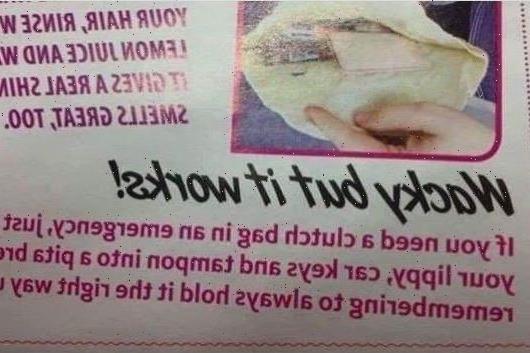 A WOMAN has suggested using a pitta bread as an emergency handbag – and her tip has people howling with laughter.

Writing into the Brainwaves section of Take A Break mag, the lass recommended popping everything from your car keys to a tampon into the makeshift clutch.

Listed under the Wacky but it works! section, the reader explains: "If you need a clutch bag in an emergency, just put your lippy, car keys and tampon into a pita bread".

They helpfully add "remembering to always hold it up the right way" because, obviously, a pitta bread doesn't have a zip or a popper on it.

Twitter erupted after actor Ryan Sampson tweeted a picture of the tip, writing: "someone please contact the reader’s brainwaves editor at Take A Break, they’re not ok".

Baffled Brits replied: "Ah yes, a pitta bread, famously more obtainable in an emergency than a plastic bag" and "Is this for real?"

One woman mocked: "I have no bags in my house! But I have a pita! Also, it’s an EMERGENCY! But I still need lipstick!"

Others said: "That one has got to be some sort of joke?!", "Have they never heard of a Pocket?" and "Wow! Bizarre!"

But some said the pitta bread could be useful on a night out – just not in the way Take A Break are suggesting.

One lad joked: "It’s handy for when you go for a dirty kebab after drinks !!!" and another lady added: "It's also a handy snack."

MOST READ IN FABULOUS

The 'send us your tips' page says: "Every week Take a Break readers display their brilliance on our brainwaves page."

And while some are genuinely very clever, others give readers a good giggle.

This Lancashire lass was previously labelled "outstanding" for her budget wedding tip – of turning a shower puff into a fascinator.