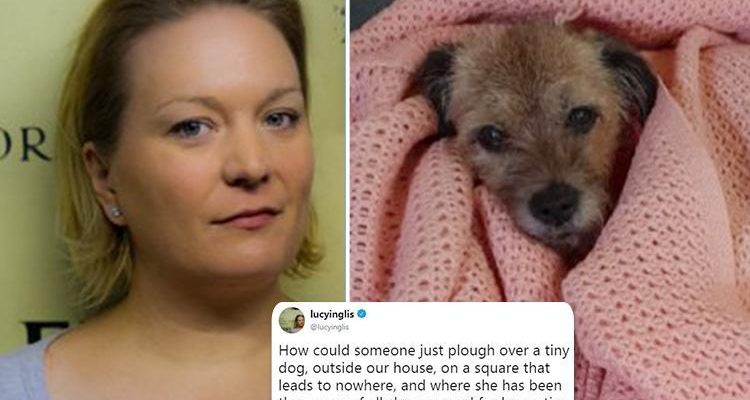 And since the tragedy Lucy has run the full gamut of emotions – from blaming the driver of the car to believing she was responsible for having her pet so close to the road. 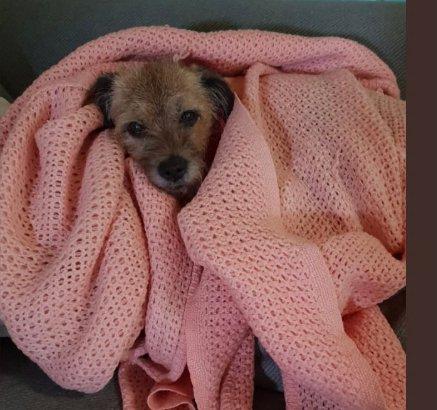 Milk of Paradise author Lucy has tweeted about her devastation at the death of 13-year-old Bridie.

She started her Twitter thread by saying: "To the man who dropped off his girlfriend then mowed down our tiny 13yo dog in the square today as I was talking to her, killing her instantly, then said to me, 'It's just an old dog', I hope you die a very f****** lonely death."

Lucy added: "How could someone just plough over a tiny dog, outside our house on a square that leads to nowhere, and where she has been the queen of all she surveyed for her entire life."

Lucy, who was a regular contributor to the BBC version of the Great British Bake Off, admitted she "screamed like a child" when she discovered her dog had died. 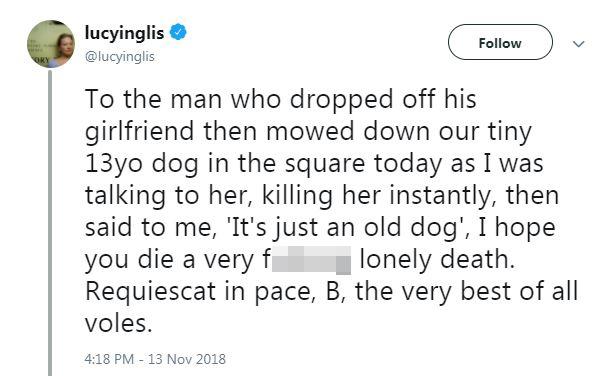 The historian, who also writes the Georgian Londonblog, also confessed she: "Wanted to be put to sleep in one of those Swiss clinics where they wipe your memory."

But then Lucy admitted she could have been to blame for her beloved pooch's death.

Describing Bridie has her "shadow for 13 years", Lucy even admitted that the dog had walked her down the aisle.

Tweeting an adorable picture of the tiny dog, she said: "I have buried you with my own hands, in your bed, with Rabbit and Long Bob the ferret.

"And your little neck scarf. I think I might be broken, now." 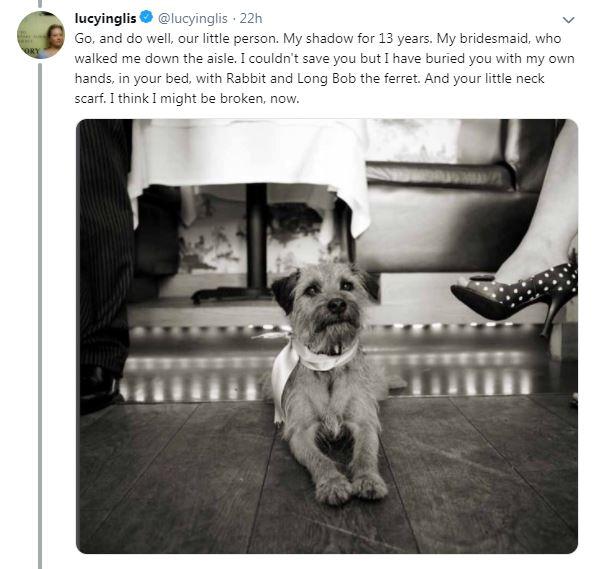 And Lucy's grief shows no signs of abating as she continues to Tweet her struggle with her dog's death.

And she had blamed herself for the tragedy, saying: You managed 13 years of the faffiest owner and then you are run down before my eyes. I should be shot.

"And it IS my fault. I was just standing there, talking to her in the square, where she trusted me, and a few cars come and go every day.

"I had a handful of dead pansies and then she was under a car and I can never live with this."

Struggling to come to terms with the death, Lucy has been Tweeting frequently about how hard she is finding the death. 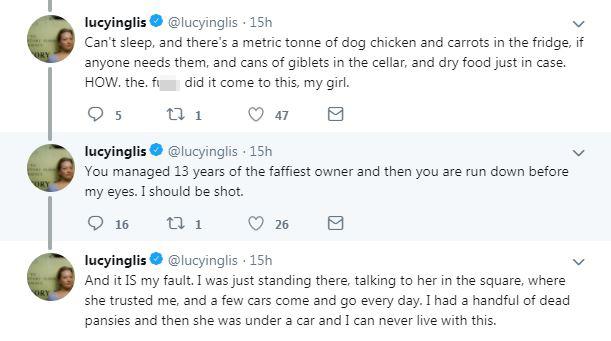 Lucy says she hasn't slept since Bridie's death and has offered the dog food and treats she has to other pet owners.

A day after the ordeal and after burying her dog, Lucy is still grieving.

She shared on Twitter earlier today that she "tried to put her little broken body in the passenger seat of the car, and she made a mess".

She added that: "I can't even bring myself to throw away a bag of dog s**t". 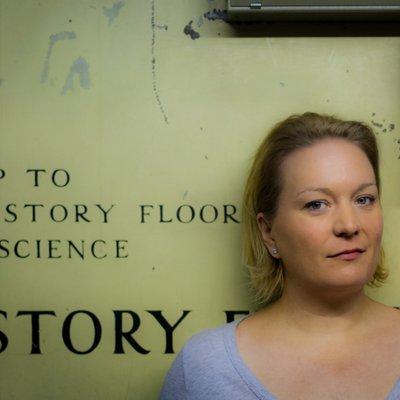 Lucy has also shared heartbreaking pictures of her dog on the London Underground and a poignant shot of her empty bowl.

And her fans and followers have rushed to give messages of support and condolence.

If you love dogs, these pictures of some four-legged friends on the Tube will brighten up your day.

Dog owners have shared their best tips to help get rid of their pets' bad breath, from feeding them CARROTS to giving them a trim.

And this sick dog thief has been caught on CCTV stealing a family's pet pug from their back garden in broad daylight.