It takes an incredible type of determination to continue to work in the midst of a war—taking breaks only when bomb sirens remind you that your life is in danger—but that is what so many people in Ukraine are doing today, as Russia’s attacks keep coming.

Kristina Stelmakh and sister Anna Stelmakh are two of those people. The fashion designers behind Kris Marán (a name which blends those of the founders and their mother) have lost most of their team due to Russian president Vladimir Putin’s war, as employees have fled the country with their families. Kris and Anna, too, had to leave Kyiv for the West due to the incessant bombings, but are currently working out of their parents’ home and shipping orders from the few post offices that remain open. Their mother, Maria, (their manufacturing director) and a team of seamstresses and pattern cutters are keeping the brand’s production alive. 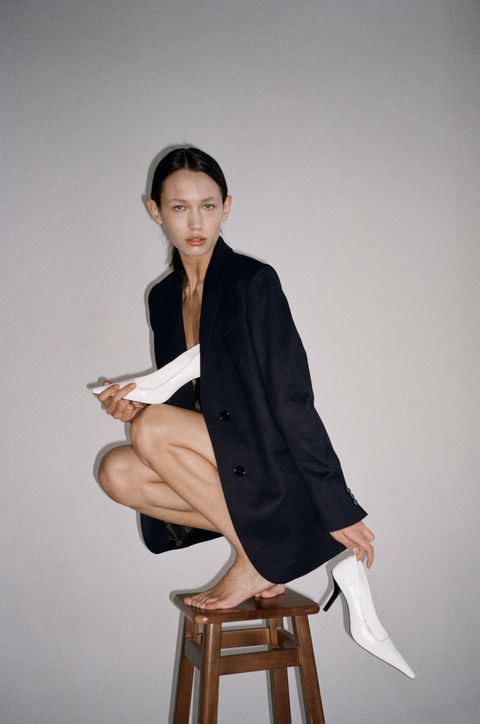 I first learned of Kris and Anna a month ago, when they sent me a deeply personal email describing their situation and insisting on gifting me a piece from their latest collection—despite the fact that they would have to custom-make the look, find a way to ship it to Poland, and from there, send it to the United States. Their undying passion very literally drove me to tears, mostly because it made me realize how heartbreaking it is that these Ukrainian designers thought that what would get an American’s attention—more than war—was a free product, and how true that often is. I also could not imagine how, in the face of death, anyone could possibly think of anything else—much less fashion or promoting their business. But what they said to me was how could they not? Their brand is their greatest source of pride, and when confronted with loss and darkness, it’s what gives them hope.

“We spent years building the brand. Kris Marán is a part of our hearts—the way we see this world,” Kris tells BAZAAR.com. “To lose this part of us, even for a while, means to lose ourselves too. We do what we love. We do what we have to.”

Still, finding the energy to create has been difficult, and living through this terrible time has changed their perspective on beauty. “The brand is one part of our hearts, and our homeland is another. It is extremely hard to create something beautiful with one part when the other is bleeding,” Kris says. Before the war, their main sources of inspiration were minimalist design and the fashion of the late ’80s. Now, the sisters say their biggest inspiration is “the strength of the feminine spirit.”

Their creations are exactly that: celebrations of female strength. Standout pieces include a structured linen blazer in hot pink, pleated straight-leg wool trousers in an earthy gray, and a vegan leather shirt in black or maroon, with breast pockets. 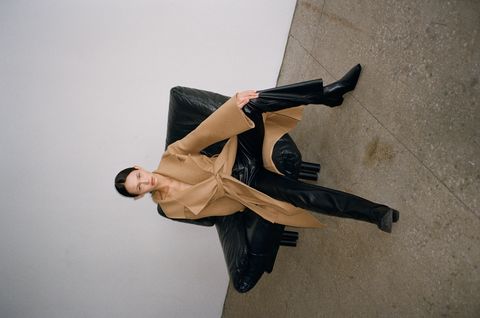 On Kris Marán’s highly curated Instagram, the sisters have continued to share pristine editorial photos of their ready-to-wear creations: chic clothes in front of bright backdrops,. Individually, the designers’ profiles show the darkness of war. On March 3, Anna shared a slideshow of before-and-after photos showing a now torn-down Kyiv. Weeks later, Kris broke her social media silence by sharing a singular William Shakespeare quote. “Hell is empty and all the devils are here,” it reads.

The duo is currently donating 30 percent of their earnings to the Ukrainian army, of which many of their friends and loved ones are now part, and to refugees.

“After two weeks of uncertainty and fear, we realized that this is the only way to stay helpful for Ukraine and its people, so we made that hard decision to continue our work,” Anna tells BAZAAR. “When watching news and hearing about innocent people and children being killed in their own houses, you start to think how to help them, and still create, but rather the ways to be useful for them.”

“It is hard to believe that just two months ago we were planning photo shoots,” Kris says.

She says the entire population in Ukraine is now part of the army; the difference is half of the people are physically fighting on the front lines, and the other half are helping the economy by keeping their businesses running. Anna says that in the evenings, after work, she, Kris, and the rest of their team still living in Ukraine visit the nearby shelters and bring warm clothes and cook for those in need. 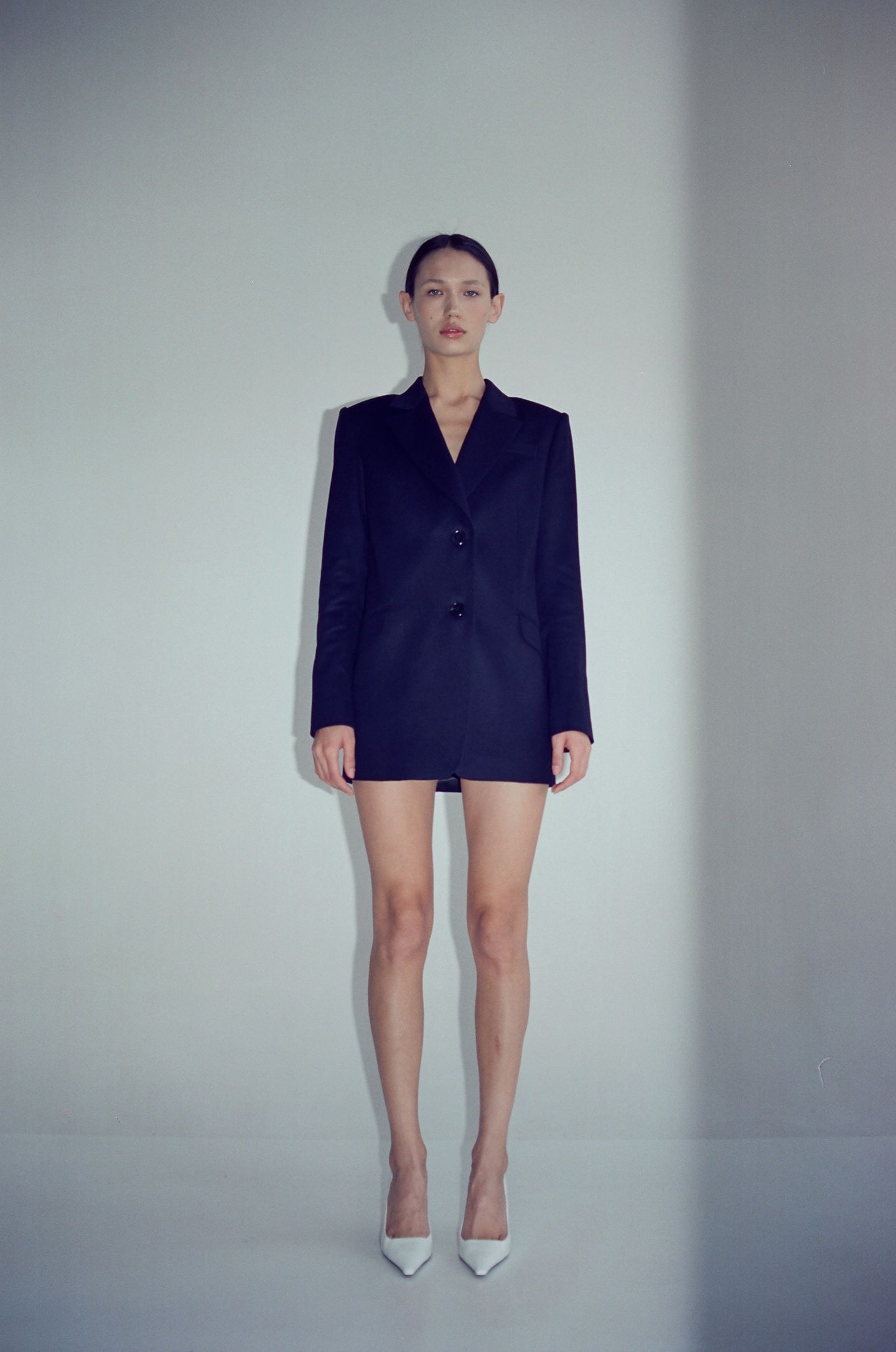 Kris and Anna say the “shock” of the war “is gone” for them, and now they’re mostly just trying to “keep a cool head and stay focused for our own sake, for our family, and for our team, which depends on us.” It’s a sentiment many Ukrainians today share: War is the new normal, now back to business as usual.

Still, the designers are far from safe and say it’s been unbelievably difficult to watch their employees work under military sirens every day.

“When we watch news from other cities like Mariupol, Kyiv, Kharkiv, surrounded by Russian troops who cruelly bomb and kill civilians and children, we can definitely say we are safe so far,” Anna says. “But one must understand that safety in Ukraine is fiction these days. Cities that are quiet today could be shelled by night. When siren signals of potential airstrikes are blasting across the west part of Ukraine, we are forced to stop the working process, seamstresses abandon sewing machines, and the whole team goes down to underground bomb shelters. We usually do this a few times during working hours, and it’s very difficult to get used to it emotionally.” 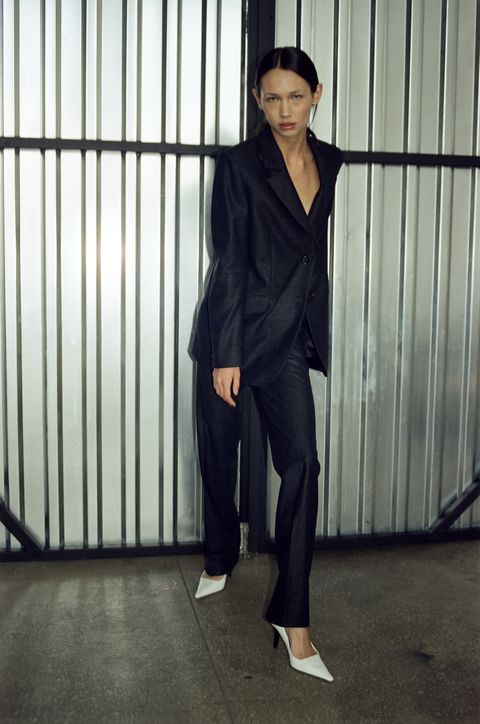 Since Putin launched his war on Ukraine on February 24, about 3,000 Ukrainian soldiers have been killed, millions have fled to other European countries, and most roads and main buildings in the east have been completely destroyed. It’s a crisis that most of us cannot even begin to imagine and, with our fast-paced news cycle and collective poor attention span, is easy to forget.

Kristina says that every morning when she wakes up, she has a few moments of mental peace, but seconds later she remembers what they’re going through, and as soon as she checks the news on her phone, she realizes “that hell is not over, so the anger comes back.” Though, before the war, their routine included a morning creative discussion session with employees, she says that’s no longer the case. “Each morning starts with phone calls to team members,” Kris says. “No more creative idea discussing, only checkups on everyone’s safety and mental health.”

“It is hard to believe that just two months ago we were planning photo shoots,” Kris adds.

Though the war forced the sisters to stop production for their spring/summer collection and cancel all bookings for their fall/winter editorial campaign, they just managed to drop a capsule collection, called Ethnic, as an homage to their country. “We want the world to understand this is not only a fight for our sovereignty and land, it is also an attempt to celebrate our culture, creative community, and historical and artisanal heritage,” Kris says.

The collection consists of four pieces (three tops, one pair of trousers) in black and white, with ancient Borshchiv embroidery elements.

“The Theatre of Drama in Mariupol, the Ivankiv Museum of Local History, the House of the Vasil Tarnovski Museum of Ukrainian Antiquities—all those unique places full of cultural heritage were turned into ruins after the Russians came,” Kris tells me. “Therefore, our creative duty is to carry the culture of Ukrainian craftsmanship and its artisanal values through this hell and spread it even more widely.”