Most of the hundreds of fairy gardeners gathered at a nursery near Cleveland were adults who seek a sense of childlike wonder by embracing the fantasy element of miniature gardening with fairies, gnomes and other mythical figurines.

But childlike wonder was on display, too. “I knew unicorns and fairies were real!” a 5-year-old girl shrieked to her mother at the first Ohio Fairy Gardening Festival in Perry, Ohio. For some in attendance, what stood before her was a majestic unicorn. For others, it was a miniature horse with a dyed rainbow mane and a horn strapped firmly on its head.

To embrace this festival, imagination is required.

Think tiny doors made for fairies placed in unexpected scenarios, fairy figures on miniature rope swings, or gnomes on beaches. If you look closely enough, you might notice fairies adorning stoops and lawns in your neighborhood. 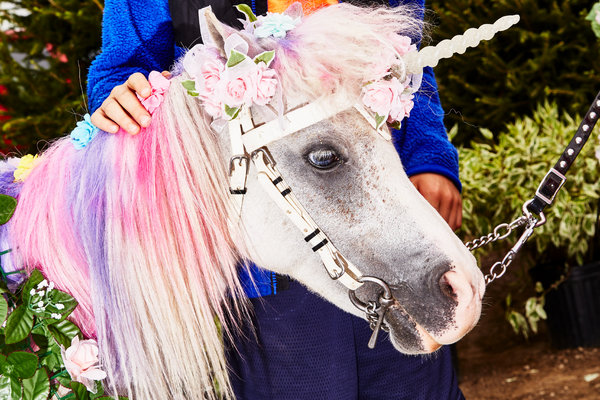 “People look at places and imagine themselves in that little world,” said Lianne Whang, 57, who with her husband runs Fairy Garden Mother in Kennesaw, Ga. “It’s a getaway for everyone,” she said as she put together fiber-optic artisan terrariums at her kitchen table.

Like many fairy hobbyists, Alma Abrams, 64, of Eastlake, Ohio, considers it a form of escapism. She embraced fairy gardening after learning five years ago that she had Parkinson’s disease, which forced her to retire early. The physical effects of the disease seriously decreased her mobility, preventing her from tending her traditional gardens. Her husband has moved the pots to higher surfaces so she could more easily craft her fairy scenes.

As we walk through her trail of 15 fairy gardens, she proudly points out one of her favorites: “I found a fairy in a wheelchair this year, she was smiling. I made sure I put her outside the fence to show that she has mobility, that she wasn’t stuck at home.”

Rita McCroskey, 62, of Painesville, Ohio, started fairy gardening four years ago after her son died in a car crash. Her fairy garden was her sanctuary. “I believe in fairies,” she said. “I think they’re special — they’re magical. They’re very magical. That’s why I believe in them. You just have to have an imagination.”

Like many niche hobbyists, fairy gardeners flock to Facebook groups — some with more than 10,000 members — to share their latest creations. That is how Julie Cole, 62, founder of the Ohio Fairy Gardening Festival, got her start.

The festival grew out of Ms. Cole’s desire to meet the communities of fairy gardeners she oversaw on Facebook. She dismisses the notion that fairies are real, but her members do not seem to mind. “I have people coming into the groups from Dubai, South Africa,” she said. “They’re from all over the world. It crosses gender, race, religion — everything. We all have this in common, and it does take us away from the real world a little bit. It’s a kinder, gentler place.”

Long before the June festival, Ms. Cole had been bringing her internet community into her Jefferson, Ohio, home for fairy workshops on the art of fairy clam beds or creating fairy clay babies. It is here, in real life, that she has made some best friends from the online group, including the artist Rachel Keith, whose work transforms tree stumps into fairy playgrounds.

“I feel like it’s my calling,” said Ms. Keith, 30, who started her creations two years ago after seeing friends share their fairy creations on Facebook. It has since became a full-fledged business, selling locally in eastern Ohio and western Pennsylvania.

Ms. Keith prides herself on distancing her family from screen time and embracing nature. She rides into the woods on four-wheelers with her husband and son to gather materials. “People like fantasy world more than the real world,” she said. “The real world is depressing. This is pure.”

Art Millican Jr., 63, a former Disney Imagineer and artist involved with creating Michael Jackson’s Neverland Ranch, felt frustrated that the children around Blairsville, Ga., relied on technology for entertainment and did not have an outlet to create and to explore their imaginations. “I never grew up,” he said. With a considerable amount of land at his disposal, Mr. Millican brought the concept for Sleepy Hollow to life.

“We’re trying to get kids to use their imaginations again,” he said. “Believing in something that may or may not be real, to a child, that can stay with them forever.”

Strolling through Fairy Lane, a creation of colorful fairy and hobbit houses by Mr. Millican, feels as if you have been catapulted to the Mickey’s ToonTown version of a fairy village. It includes life-size houses that can accommodate children and adults alike. “It’s what Disney would teach you: to become part of the film,” he explains. “If everything was so tiny that the kids couldn’t go outside, it starts to lose the magic. If you can go inside the magical houses, it brings it that much more to life.”

The community is big, but the business is bigger. Mr. Millican estimates he has sold more than 20,000 fairy houses, with prices ranging from $49 to at least $500. One customer even asked Mr. Millican to create an actual fairy home to live in. He politely declined: “I’m not a contractor.”

Julie Breckel, 59, a fairy gardener from Parma Heights, Ohio, who attended Ms. Cole’s workshops so she can begin making her own pieces, says she has spent over $2,000 on her fairy garden. As she has acquired more fairies, she has slowly begun taking over prime real estate in her husband’s garden. “You could do a separate story on the marital problems caused by fairy gardens,” another workshop attendee chimed in.

The price points for materials range from thrift store scores to thousands of dollars for fairy castles on Etsy. It is possible to find fairy gardening supplies in chain stores, but that negates the very ethos for artists like Lori Tanner. “I got frustrated because when you go to Michaels or Hobby Lobby, everything they have is plastic resin,” said Ms. Tanner, who sells under the name Elysium Glen. “That’s not what the fairies are about. They’re about the natural elements; it should be as natural as possible.”

While the natural and organic look is favored among many in the community, unexpected recycled materials are just as popular. Ms. Cole says she will put fairy wings on just about anything, from Minnie Mouse figures found at the local Goodwill to a princess Christmas ornament.

Shawne Keane, 46, president of Olde Towne Gardens Nursery in East Setauket, N.Y., has become known for his extravagant, themed fairy gardens and workshops, including ones based on “Beetlejuice” and “The Walking Dead.” At a workshop on Star Wars Day, Mr. Keane explained to 5-year-old boys and older women that he dug into his 1977 collection and scoured eBay for used toys to create his Star Wars fairy garden.

Of the fairy phenomenon, Mr. Keane said, “We’re all kids, so it makes it exciting.” phenomenon.