I was at work when my phone lit up with a Facebook notification. Someone had tagged me in a link to a newspaper article from my hometown: “Woman, child in serious condition after Highway 212 crash.”

I clicked and then winced as I took in a photo of an icy Montana highway, a pickup with the hood smashed in, and a blue Subaru Outback that had been cut cleanly in half. Skimming, I learned that the woman — a former high school classmate, Deirdre — was expected to survive and her daughter, 3, had been airlifted to a hospital.

Three years earlier, my husband, Eric, and I had lost our 22-month-old son, Seamus, when they were struck in a crosswalk by a careless driver. I disappeared from Facebook afterward, emerging only when I became pregnant 16 months later, a tidy ending for my social media world. I let others write the story of my marriage as one that survived tragedy and emerged even stronger.

In reality, we were more like a ship that had weathered a bad storm — grateful and relieved to be afloat, but the damage was extensive.

The implication from my friend who tagged me was that I should do something. But I hadn’t seen Deirdre in 20 years. How would it feel to hear from someone whose experience included the worst outcome?

I grabbed my raincoat and headed out. It was drizzly and cold in downtown Portland, the streets bustling with Christmas shoppers. My son and daughter — twins born two years after Seamus died — had just turned 1, and this was the first year in recent memory I approached the holiday with something other than dread. I had even dug out our Christmas decorations, a disorganized time capsule of tangled light strings, Seamus’s stocking and random ornaments.

Along the river the crowd thinned, reduced to the occasional jogger or cyclist. I was tempted to yell, “Children aren’t supposed to die!” just to feel a little less alone. Surely they would agree.

But grief is a solitary journey, even when you’re married and the deceased is a child you loved in equal measure. When we returned from the hospital without Seamus, Eric retreated to the nursery, howling with pain. I avoided Seamus’s room, instead sitting on the couch he had christened with a Sharpie just a few days earlier, my body vibrating with shock as I received a steady stream of tearful visitors.

As the weeks wore on, I sought solace from friends and therapy while Eric turned inward, comforted only by the thought of having another child. I wanted another baby, too, but I also wanted to travel, sell our house, start over — all things Eric resisted.

If we stayed together, it was mostly in proximity, necessitated by our shared goal of becoming parents again. We spent a year having sad, purposeful sex. Then, as I approached my 36th birthday, we sought help from a fertility specialist, who pronounced us infertile, refusing to treat us unless we used an egg donor. Then a second doctor agreed to a Hail Mary round of in vitro fertilization for $18,000.

When we learned I was pregnant with twins, our community — most of whom knew nothing of our struggle to become pregnant — celebrated with us, using words like “miracle.” Meanwhile, I surveyed the damage.

Having more children did not reduce the sadness that had become the identifying feature of our marriage, but it did force our hearts to expand to accommodate other, happier emotions.

My life acquired a richness that did not exist before Seamus died, as if it had switched from black-and-white television to high definition color. I was surprised by the way ordinary pleasures — birds on our feeder, the sticky grasp of toddler fingers or a sip of water after a run — counterweighed the sorrow.

If Deirdre’s daughter didn’t make it, this is what I would want to tell her: that grief is exactly as painful as you think it will be, but with time you will learn to love your sadness because of the tiny shoots of joy and gratitude that sprout around it, like new growth on scorched earth.

Rounding the corner to my office, I brought my thoughts back to the present, where an afternoon meeting and an evening of toddler wrangling awaited. I told myself there was nothing I could do, that Deirdre’s daughter would make a full recovery, probably.

Two weeks later, I received another Facebook message letting me know that Deirdre’s daughter had died. This time, there was no stuffing my feelings. I came home from work and raced through a blur of food-smeared trays, double baths, lullabies and feeble cleanup efforts before collapsing with Eric on the couch, where we cried together, replaying those first awful days in our heads.

One afternoon while our children napped, I ventured into our basement to retrieve a wicker basket of cards we had received after Seamus died, feeling a sudden camaraderie with the writers, despite the common phrases that kept appearing: “There are no words.” “You are in our hearts.” “I cannot imagine your pain.”

No one can think of the perfect thing to say at such times. I couldn’t either.

But remembering the comfort the notes had brought, I decided to send Deirdre a card anyway. To my surprise, she replied by email, and soon we were exchanging text messages. I told her I had a trip to Montana planned in April, and we arranged to meet.

On the drive to her house, I clutched a small moonstone my grief counselor had given me. Its smooth surface calmed me as I navigated a two-lane highway that threaded through a Montana landscape of grazing cattle and snow-dusted hills.

Inching my car toward a cozy cabin at the end of a long driveway, I felt young Zoe’s absence press against my chest. I wondered if horses in the nearby pasture noticed the way world around them had been altered. It was a stillness I knew well.

Deirdre greeted me with a hug, apologizing as her new puppy, Chief, mauled me with wet dog kisses. Tall and slender, her brown hair cut into a bob, she had no visible signs of injury. With the exception of a few strands of gray hair, she looked much as she had two decades before.

We went for a walk through the winding streets of her subdivision, the Beartooth Mountains towering in the distance and Chief running in circles, entertaining us with his puppy energy.

There was no small talk. We discussed watching our children die, moving easily between medical terms and mother terms. At one point, one of Deirdre’s neighbors drove by in a black pickup. She rolled down her window and Deirdre introduced me, then they chatted for a few minutes.

As the woman drove away, Deirdre said, “That’s Chief’s veterinarian. She also lost a son, years ago.”

I marveled at the three of us talking about the weather and the dog, our shattered hearts somehow still beating.

I asked Deirdre how her marriage was holding up, and she told me her husband was struggling over having made the decision to withdraw care for Zoe. I found myself saying, “I can’t imagine,” even though I could and had imagined that scenario with Seamus many times.

“By the time doctors declared Seamus’s time of death,” I said, “there was no room for doubt.” I then said something about being “lucky,” and we both laughed. I told her my marriage had suffered — Eric’s near-total reliance on me for emotional support was suffocating at times, and I often felt I had to choose between caring for him and caring for myself. But people didn’t want to hear that because it countered the preferred narrative of healing and recovery.

Deirdre said she loved her husband but wasn’t sure what would become of her marriage. I was glad to give her space to voice something that was obviously true. 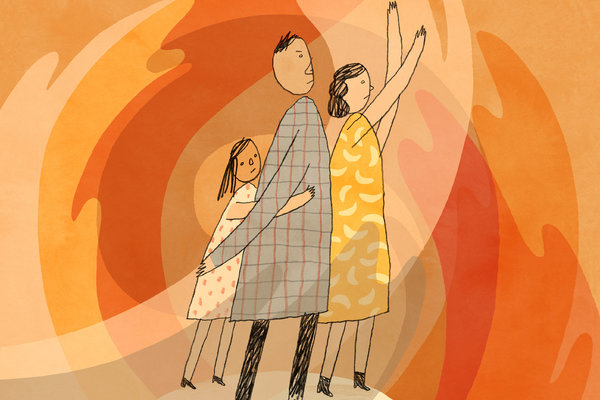 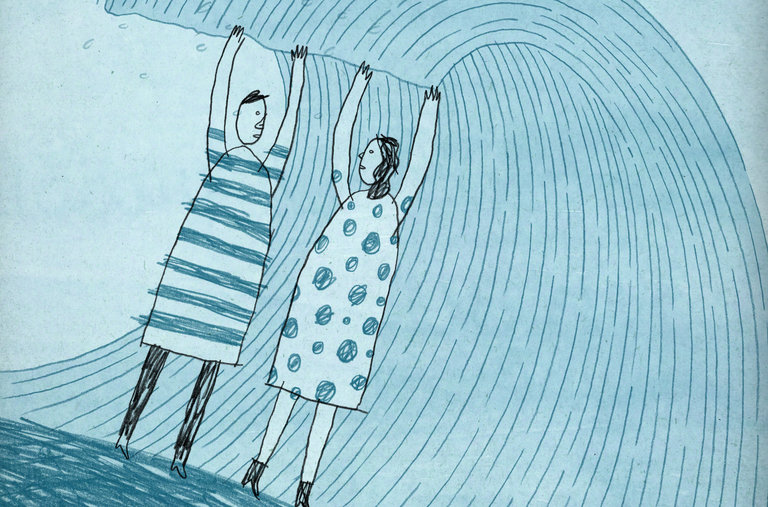 During our conversation, we discovered that both Seamus and Zoe loved the moon, so before I left, I handed Deirdre the moonstone my counselor had given me, and we promised to keep in touch.

Two hours after I arrived, as the sun set in fiery streaks over the mountains, I drove back to my family. When a farmer waved at me from inside a beat-up pickup, I thought about the comfort of sturdy, unglamorous things, my marriage among them.

Ours may not be a great love story, but set against a backdrop of cruel nature and boundless beauty, I didn’t need it to be.

Michelle DuBarry, who works as a grant writer in Portland, Ore., has recently completed a memoir.

Modern Love can be reached at [email protected]