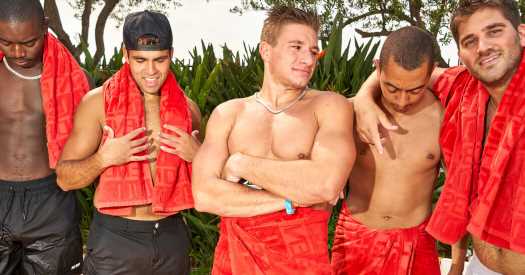 SANTA ANA, Calif. — Many big YouTubers earn money by running advertisements on their videos. Not the Nelk Boys. The creators state often and with pride that they make no income from the platform, despite their regular video uploads, high view counts and millions of loyal subscribers.

That their channel produces no revenue is neither a fluke nor an accident. Their videos revolve around frat-like parties and elaborate pranks that sometimes promote illegal activities. They drink and curse and make crude jokes on camera. The police show up a lot.

YouTube doesn’t love that. Which is why last year, after a series of incidents in which the group encouraged fans to flout Covid-19 safety guidelines, Nelk’s channel was demonetized.

The Nelk Boys’s response: Who cares? Ads weren’t a big part of their livelihood.

“Every video, we’re swearing, we’re doing some stuff that could be questionable or illegal, we’re making sexual references or drug references,” said Kyle Forgeard, 26, the group’s leader. “So we were making no money on YouTube at all.”

Instead, they have sold their 6.6 million fans on the Nelk lifestyle, which is both a state of mind and a growing suite of subscriptions and products, all summed up by the cryptic-to-anyone-but-a-bro catchphrase “full send.”

“It started out meaning party hard, but now it’s evolved into, ‘Any activity you do, give it your absolute best,’” Mr. Forgeard said. “If you’re in the gym, you got to full send in the gym.”

And while their work can often look like play on YouTube, a visit to Nelk’s headquarters painted a much more staid and corporate picture of the Full Send life. 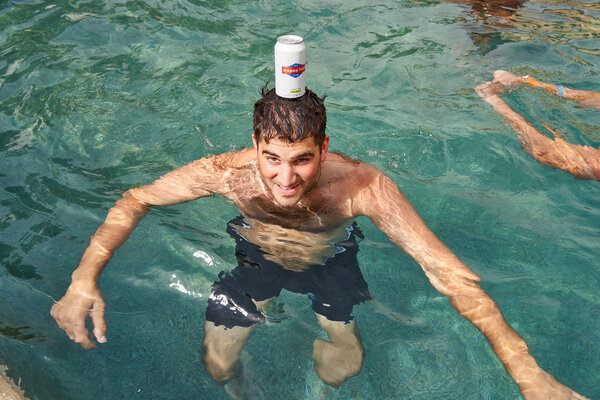 All in a Day’s Work

Outside a nondescript building in an unassuming office park in Santa Ana, Calif., there were few signs of the Nelk Boys, save for a truck parked out front carrying cases of the group’s new hard seltzer, Happy Dad, and a bright red Lamborghini with “Full Send” emblazoned on the hood.

Inside, there was a similar quiet. For the duration of a reporter’s visit, most employees in the open-plan office were heads down, working on videos and business development.

The scene at the office — and later, at the sprawling house where the boys live — was a stark contrast to Nelk’s public image.

“If you took the frats depicted in ’80s and ’90s college movies and gave them the technology of 2021 America, that’s basically what Nelk is,” said Joshua Cohen, the founder of Tubefilter, a website that covers the creator economy. “They’re popular because they always look like they’re having a good time and embodying this seemingly idyllic partying existence.”

In addition to going “full send” with their parties, the group’s members have posed as real estate agents and fortune tellers; changed QR codes on restaurant menus; trolled Trump supporters (then met with the former president); and Zoom-bombed distance-learning classes — anything to rile up their fans and ruffle other people’s feathers.

Nelk first formed in 2010, when Mr. Forgeard was a high school freshman. The name was an acronym, standing for its original pranksters: Nick, Elliot, Lucas and Kyle, who’d grown up together in Mississauga, Ontario, just outside Toronto. The “N” and “E” didn’t stick around for too long, but the “L” — Lucas Gasparini — kept recording and uploading videos with Mr. Forgeard.

Early on, Nelk’s YouTube channel was bringing in around $500 a month in ad revenue, a sum based on the number of impressions each video received. “We made more money from YouTube back then than we do now,” Mr. Forgeard said. When that figure jumped to $5,000 a month in 2014, Mr. Forgeard and Jesse Sebastiani, another member of Nelk, moved from Toronto into an apartment in downtown Los Angeles.

Their first big hit came in 2015, when Mr. Forgeard and his friends put a big pack of Coca-Cola in the trunk of a car and began offering “coke” to passers-by in Venice Beach. Before long, the police showed up; when they opened the trunk, the officers broke into laughter. The video was an instant Nelk classic, and has pulled in more than 44 million views.

Over the years, the Nelk Boys have traveled the country to film pranks and parties and bring new talent into the fold. Steve Deleonardis, 22, became a member in 2018, and Salim Sirur, a 19-year-old from San Jose, Calif., joined the group last year after Mr. Forgeard discovered him online.

Through it all, the boys have always stuck to their tried-and-true methods: going a little nuts in service of the brand.

In 2020, however, the group went a little further with its antics. Last September, after Nelk promoted an in-person college party at Illinois State University, YouTube demonetized their channel, citing a violation of the platform’s “creator responsibility” policy and stating that the boys were “creating a widespread public health risk.”

“We couldn’t go anywhere at first, so we tried to make it work by filming around the house,” said Mr. Forgeard of the pandemic, “but Nelk is so based on traveling, that’s been our whole thing, being a traveling show.” (They eventually stopped promoting their stops to prevent large crowds.)

“A lot of YouTubers put on a front, they’re press-trained,” said John Shahidi, one of the group’s business partners. “With Nelk, what you see is what you get.”

Mr. Forgeard said that’s what insulates them from backlash: The backlash is part of their brand. “A lot of YouTubers are fake, or they’re so goody-goody online. Then you go to an L.A. party and they’re doing drugs in the bathroom,” he said. “We were always real, we didn’t want to be fake for the camera.”

In the winter of 2020, Mr. Shahidi joined as president of the Nelk business, including the Full Send merch line; he encouraged Mr. Forgeard and Mr. Deleonardis to lean harder into marketing their lifestyle through products. He also brought in his brother, Sam Shahidi, to oversee Nelk and Happy Dad at the executive level.

According to the company, Nelk sold $50 million in Full Send merchandise last year and could surpass $70 million this year. Merch is sold in limited edition “drops,” so hype remains high. Mr. Cohen, at Tubefilter, said of the tens of millions of dollars being made: “These numbers are really high but if you look at the very top echelon of YouTubers and online video stars, this is what they’re able to do.”

The Happy Dad hard seltzer line is also bringing in tons of money. When the drink was released in June, rowdy fans lined up outside some stores, eager for a chance to meet the creators. The seltzer quickly sold out online and in liquor stores across California.

“YouTube money is pennies compared to building businesses like a seltzer,” Mr. Forgeard said. “We’re not going to sacrifice our content or change to make $500,000 a month from YouTube,” he added. “Maybe in the short term we’re not buying Lambos like other YouTubers, but we could have a multibillion-dollar business on our hands with this hard seltzer.”

Happy Dad is just the first step toward what they hope will be an entire line of products and services. John Shahidi imagines Nelk someday competing with multinational corporations like Amazon, Anheuser Bush and Apple.

“With our audience, we can build pretty much anything,” Mr. Forgeard said. “Maybe we start a men’s grooming company or we could sell condoms if we wanted to. We could open Full Send gyms. We could do pizza delivery.”

Mr. Shahidi said that they could “have a network of drivers that can eventually deliver anything that’s in our ecosystem — whether that’s a hoodie or 12-pack of Happy Dad or protein bars.”

One way Nelk will not make money is through pump-and-dump crypto schemes, which have become popular with other influencers. They recently warned fans in a Twitter post not to invest in alt-currencies being hawked by creators. “When you all TRUST them and invest, they sell and make tons of money off YOU!” the tweet read. “Don’t fall for it.”

Recently, the group has been jetting around the country to promote Happy Dad, meet fans and, of course, get into trouble.

In April, Mr. Forgeard was arrested on charges of riding a Segway around a mall pretending to be a security guard for a video. The charges were later dropped, but the hashtag #FreeKyle trended on Twitter and fans raised money for his bail.

For some creators, it would have been a scandal. For the Nelk Boys, it was a boost. “Once you have your own platform,” Mr. Forgeard said, “you can do whatever you want.”