EVERYONE wants a movie room in their house right?

But don’t be put off if you haven’t got thousands of pounds to spend doing up your living room. 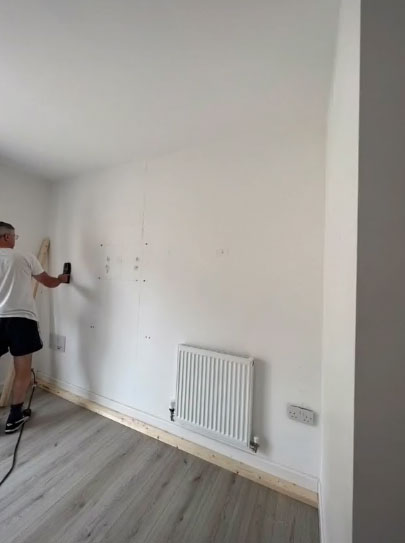 If you want to save yourself the money and know a thing or two about DIY (or know someone that can do it for you on a budget), you can bring the media room to your home and save yourself the cash getting the builders in.

This is just what one family did.

Lauren and Chris, a couple from Bedfordshire, created their own DIY movie wall on a budget and you won’t believe how much they saved by doing it themselves.

They documented their DIY movie wall journey to their TikTok account ‘mulberryreachhome’.

They said: “When you get quoted 5-7k so do it yourself.

“Watch my dad build us an entertainment/media wall.”

What started off as just a TV with a plain, white wall behind it was transformed to a cosy space that looks super trendy.

The video shows the journey of the DIY job, as Lauren’s dad gets to work building the wooden frames with cut-out alcoves to store soft furnishings, instantly adding glamour to the home.

And in the middle of it all?

The finished result shows a gorgeous space with a cosy fireplace and three alcoves either side of a huge TV.

Lauren explained: “BTW I work in film and a cinema room is all I’ve ever wanted.

“Until I buy a bigger house, this is the next best thing. 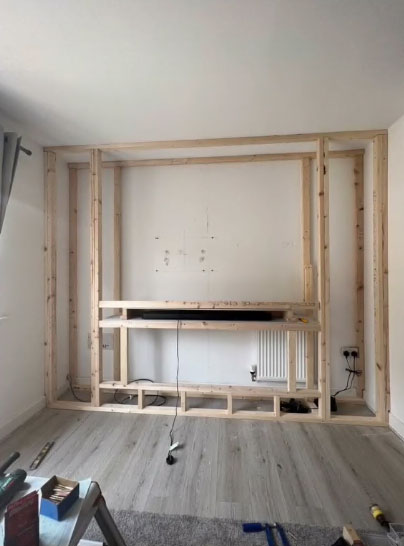 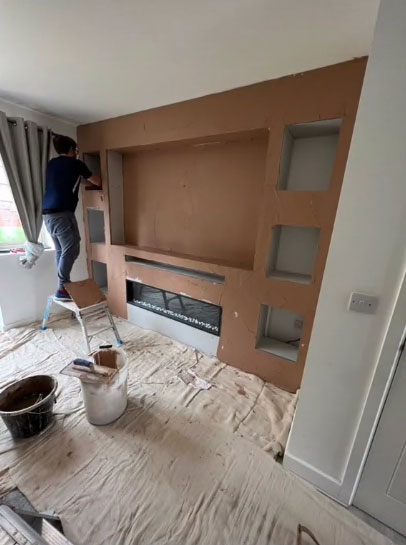 The £1.7k was spent on timber, plasterboard, screws, fixings, plastering, primer and paint.

Thanks to Lauren’s dad doing the job for them, the couple have saved themselves between £3,300-£5,300 depending on what quote they would have gone with.

One person asked “Looks nice but seems like it takes up a lot of space in that small room?” to which Lauren responded “It actually makes the room feel a lot bigger!!”

When Kelsey revealed the final result, she said: “I am obsessed.”

Clearly the DIY job has impressed numerous people as it has racked up over 100,000 views.

One person said: “Omg love it.” 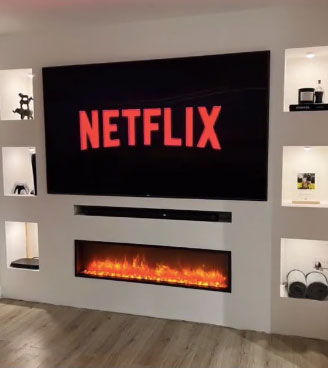 Meanwhile, one woman saved hundreds after she transformed an tatty old IKEA cabinet into a swanky new one for just £15.

Also, a part-time nurse & make £500 a pop sprucing up old furniture – it’s an easy money-spinner so here’s how you can too.