The 20-year-old rowing captain was aiming for gold at the prestigious Henley Royal Regatta but her dreams were cut short when she developed compartment syndrome – a condition that causes bleeding in the muscles. 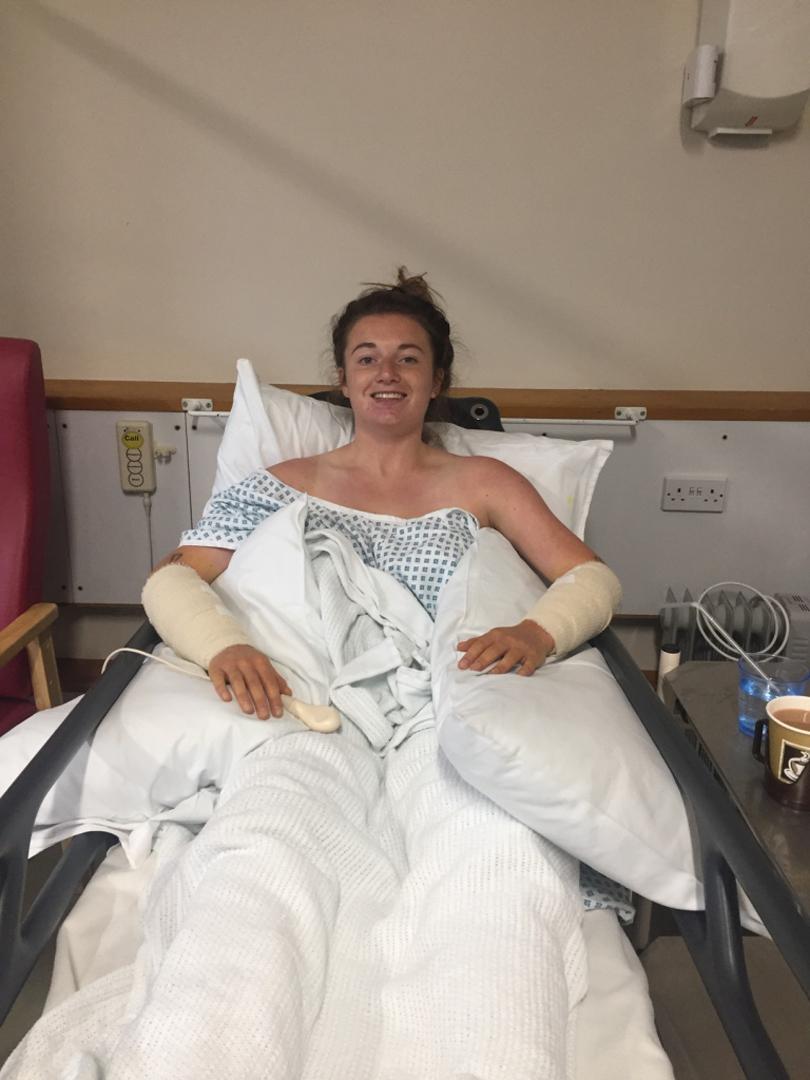 Surgeons were forced to slice open her arms to relieve the deadly pressure.

Alice Vodden from Berkhamsted, Hertfordshire, began experiencing excruciating pain in her forearms while out on the water captaining Warwick University women’s first team in January 2018.

At first told by doctors that her agony most likely resulted from tendonitis – a swelling of the tendons – Alice kept training through the pain, desperate to make it to the rowing event in Henley, Buckinghamshire.

But when her hands turned blue and lost all feeling on April 17, 2018 she was admitted to hospital and diagnosed with compartment syndrome, a rare condition caused by a build-up of pressure in the compartments between muscles. 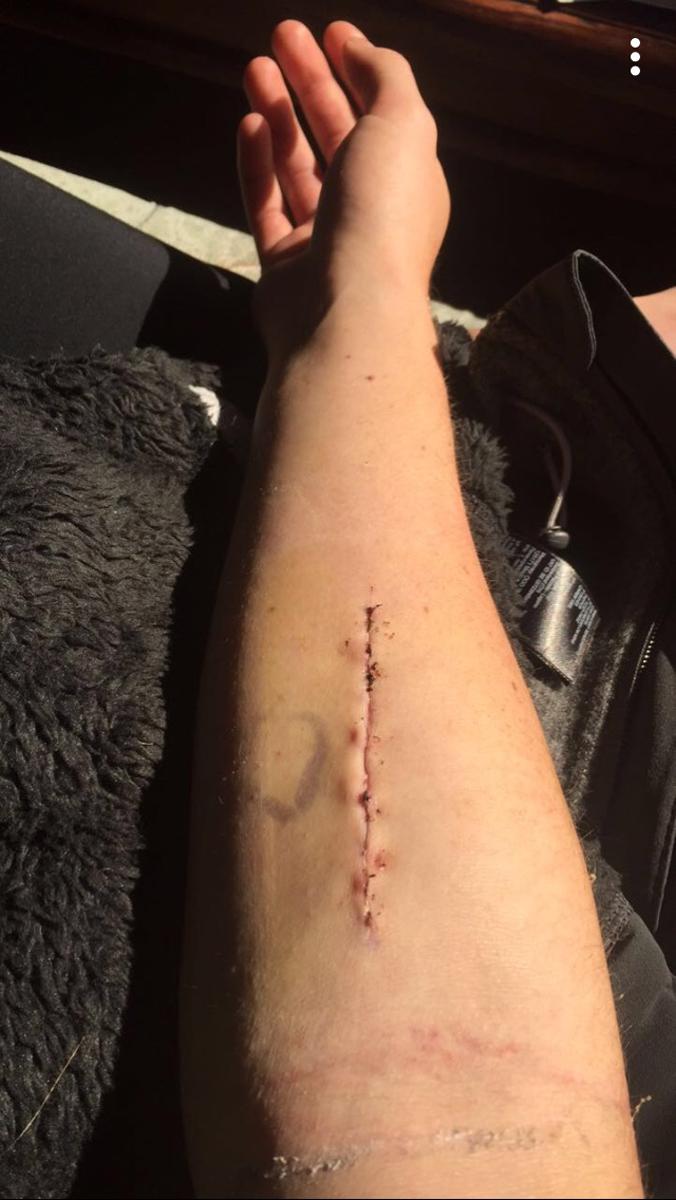 Warned by surgeons  that the pressure was so severe she was in danger of irreparable nerve damage, they recommended an urgent operation, which would involve “slicing into” her arms.

Following two bouts of surgery, one for each arm, the third-year student was left with scars along her forearms and wasn’t  able to compete at the June regatta – her dream since she started rowing at the age of 14.

“The operations were invasive and the scars are now very obvious,” she said.

“But I don’t try and hide them and I get annoyed when people just stare and don’t ask how it happened, because I like to tell people the story of them. 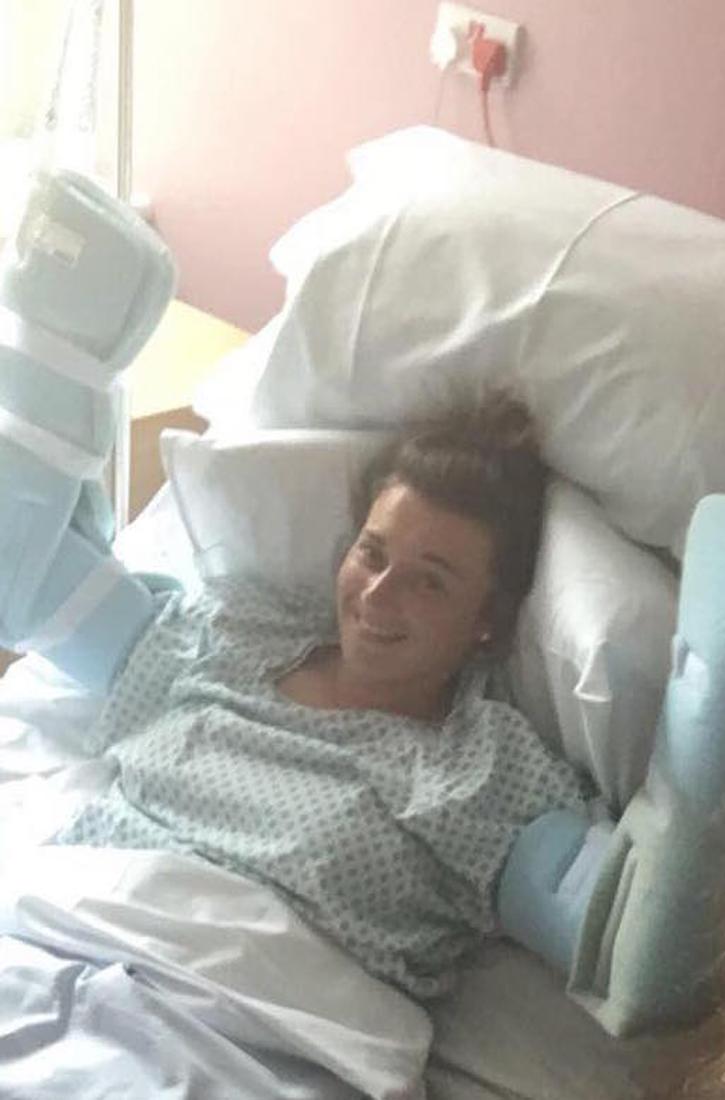 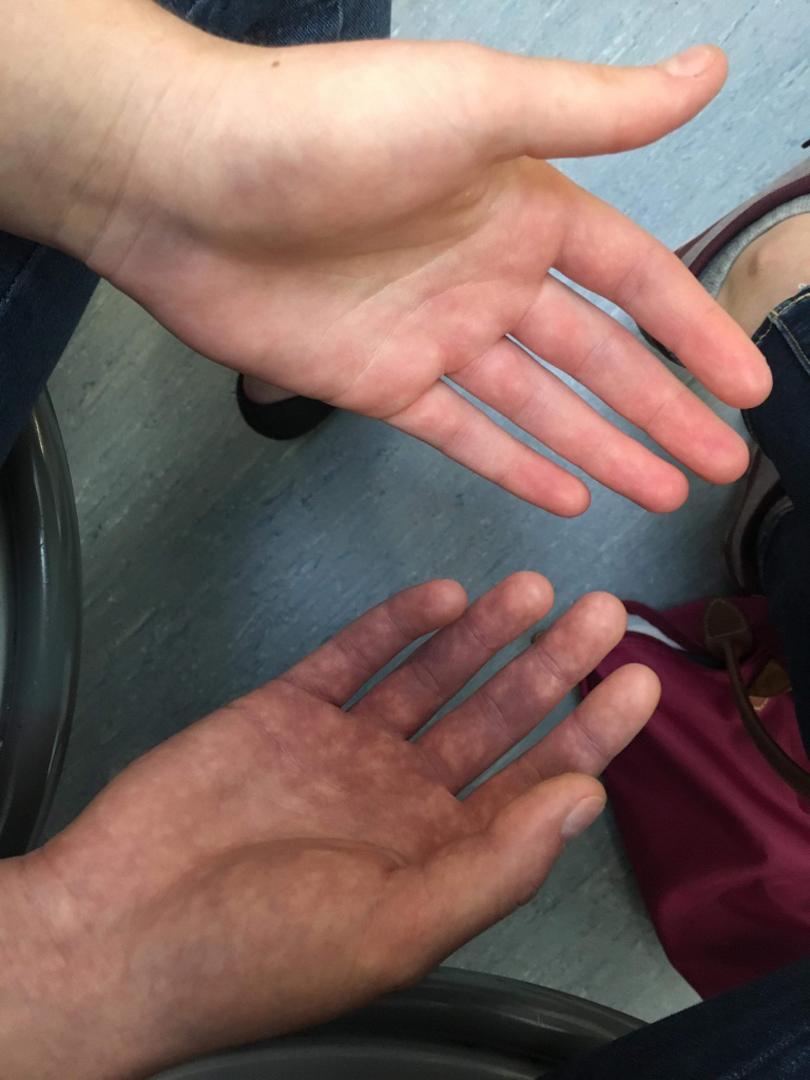 “What is much more hard to bear is the fact that I couldn’t do Henley and that now I don’t know if I’ll be able to get back in a boat ever again.”

Alice first began to notice an unusual burning sensation in her lower arms in October 2017.

Training either in the gym or in the boat for up to 15 hours each week with her teammates, Alice was no stranger to aches and pains – but this was more intense than anything she had experienced.

“I’d had pains before in my arms, but nothing like this,” she said.

“I suddenly developed this terrible burning sensation, along with tightness and swelling.

“It sometimes really felt as though my arms were about to explode.” 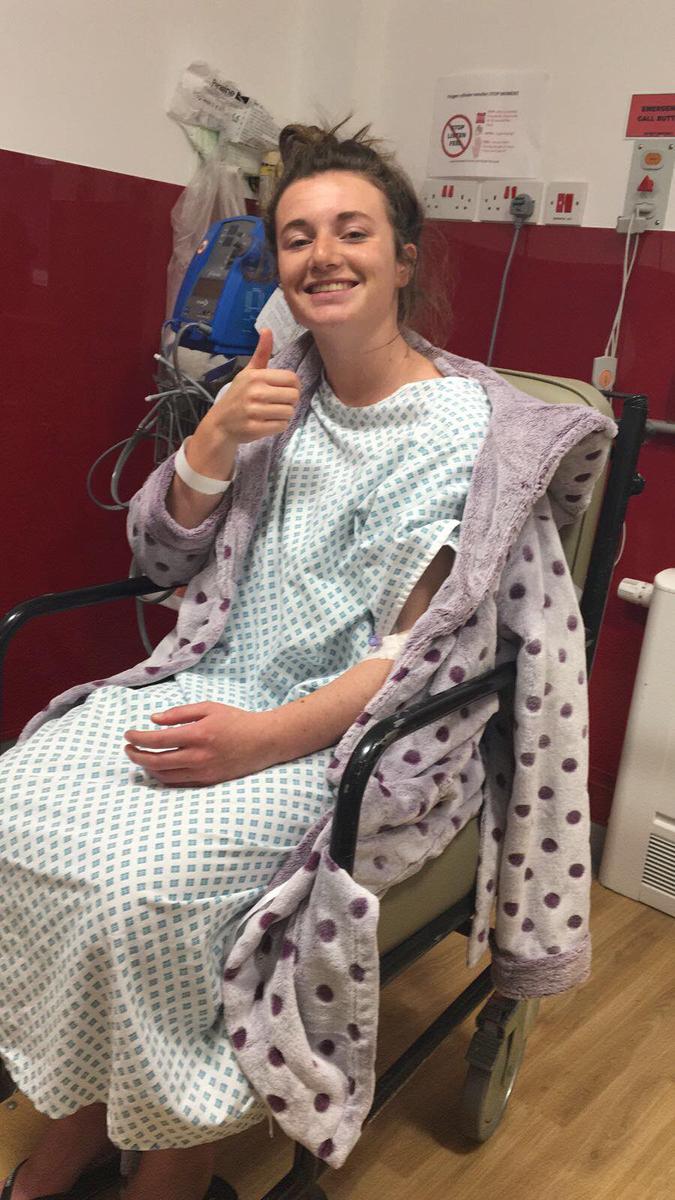 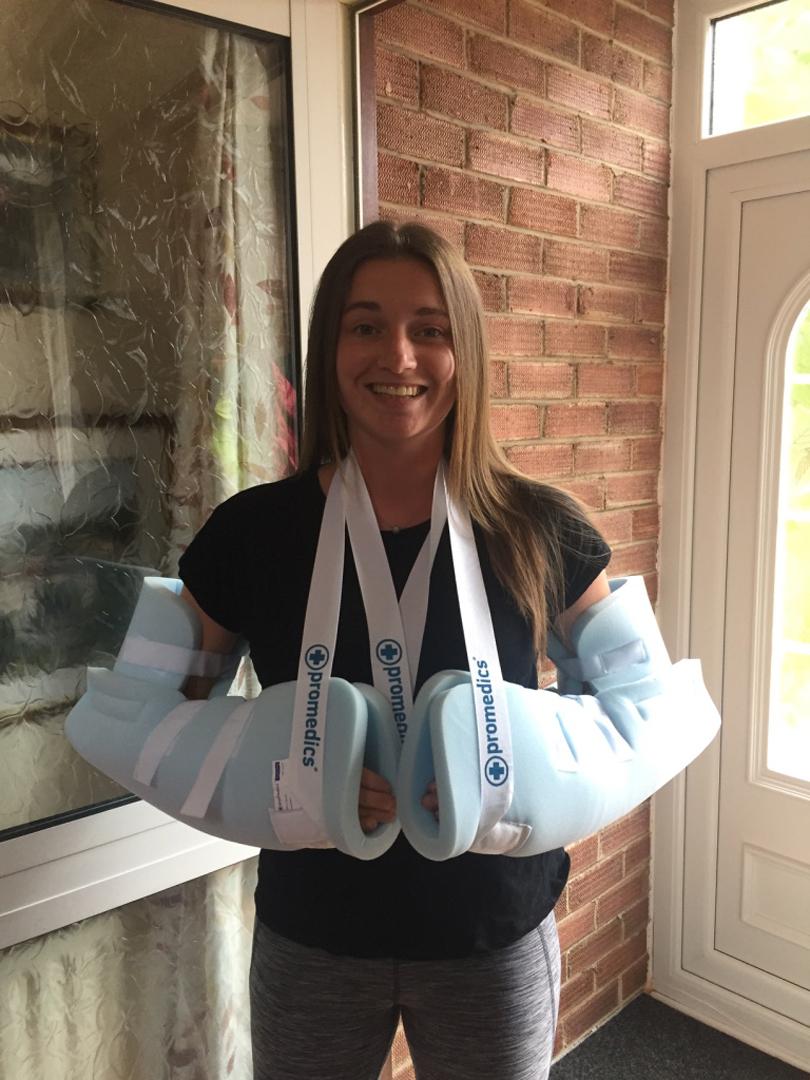 But rather than visit her GP, Alice decided to try and work through the pain, telling herself that it was down to poor technique.

Eventually the agony, which was getting worse with every passing week, became too much to bare and she eventually saw a doctor.

“They said to me that it was tendonitis, which even itself was a bit of a surprise for me because I had never had any sports injury or illness before,” she said.

“So, I took it easy for a while after that, still training, but just going on the exercise bikes, trying to keep my fitness up for the regatta in June.”

Instead of easing, the pain intensified until it was so overwhelming it began to affect not just her sporting life, but her day-to-day tasks as well. 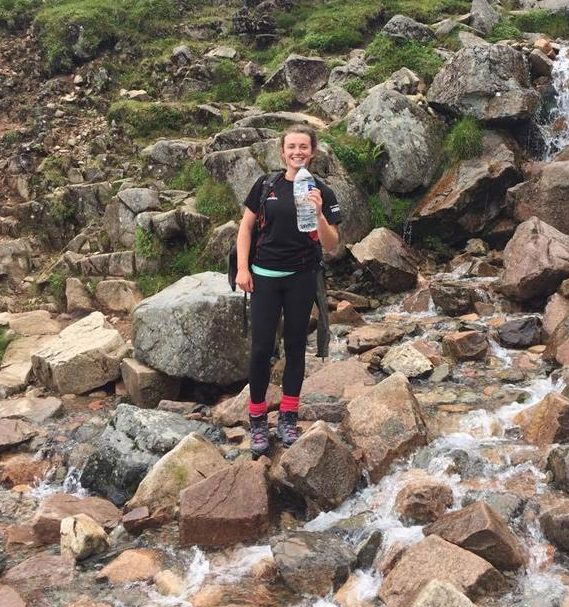 “It was getting to the stage where I was struggling to use my arms – not just for rowing, but for typing on my laptop and carrying things that weren’t even particularly heavy,” she added.

Ruling herself out of training entirely, she had regular sessions with physiotherapists, who were perplexed by her symptoms, which now were being put down to a general sports injury.

The devoted rower still held on to hopes of recovering in time to lead her team in Henley.

With less than two months to the regatta and still no relief from her constant pain, Alice travelled with her fellow rowers to a training camp in Bordeaux in April.

“We were there for eight days and everything was all fine with me sitting out and just being there really for moral support, as I could hardly hold an oar,” she recalled.

“The flight back was when things started to go wrong.” 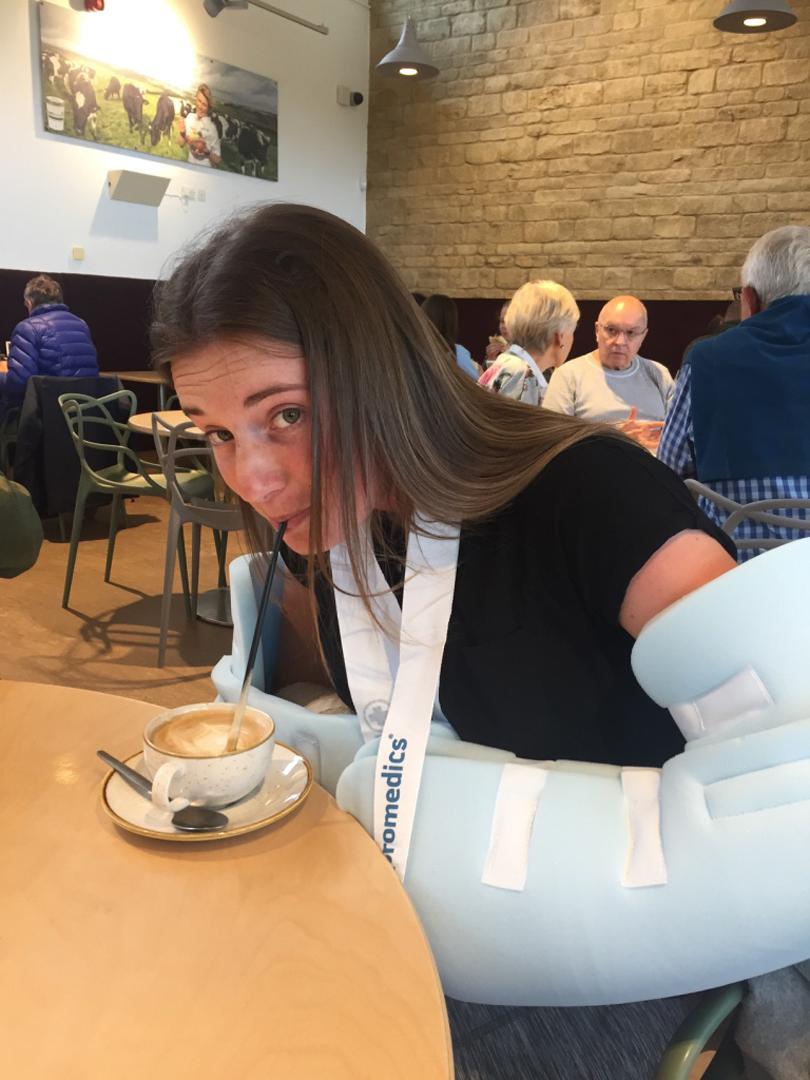 Thirty minutes in to the two-hour flight back to Birmingham, the closest airport to Warwick, Alice’s hands began to turn blue, going numb and hard, while her pulse was hardly detectable.

“It was terrifying, especially knowing that you are up in the air and can’t do anything about it,” she said.

“I told my friends and they seemed equally concerned, but just tried to keep me calm and made me put my arms up in the air to try to reduce the swelling.”

Alice did not want to go to hospital as she was due to catch a train to Harrogate, North Yorkshire, 145 miles away the next day to see stay with her grandmother Margaret, 70, for three days.

She went to bed hoping her symptoms would disappear.

Instead, two days later, they were still blue and numb and she was unable to hold anything.

On the insistence of her grandmother she finally went to Harrogate District Hospital A&E, where she was given a CT scan and compartment pressure test, leading to the compartment syndrome diagnosis.

“The doctors who saw me were all really surprised, as they had only ever read about compartment syndrome and never seen it for themselves,” said Alice, who was in hospital in Harrogate for a week.

“They would invite the medical students to come and see me and take notes.

“For me, though, it was as much a relief as it was a shock. I was just glad that they finally knew what it was that had been giving me so much grief.”

A RARE CONDITION THAT CAUSES SWELLING IN THE MUSCLES

Compartment syndrome is a painful and potentially serious condition caused by bleeding or swelling within an enclosed bundle of muscles – known as a muscle compartment.

Each group of muscles in the arms and legs, together with nearby blood vessels and nerves, is contained in a space surrounded by tissue called fascia.

Compartment syndrome occurs when the pressure within a compartment increases, restricting the blood flow to the area and potentially damaging the muscles and nearby nerves.

It usually occurs in the legs, feet, arms or hands, but can occur wherever there's an enclosed compartment inside the body.

If you have these symptoms you should see a doctor.

With both arms raised in a sling to reduce the swelling, Alice was booked in for surgery a week later, which she was warned would leave her with considerable scarring as surgeons had to cut deep into the arm from the elbow to the wrist to reach the compartments filled with pressurised air.

Following the successful procedures, almost instantly she could feel the pressure being released, saying: “It was so exciting not having this constant pain any more. The pressure went immediately and everything just felt so much better.”

While finally being without physical pain was a relief, Alice was shattered at missing her chance of winning the gold at Henley.

“It was a really difficult time, even though I knew I was now on the mend, because my whole university life had revolved around rowing. Now I was in a position where I didn’t know if I’d ever be able to row again,” she recalled.

“I kept thinking, ‘Why me?’. I had never been in hospital before – so I couldn’t understand why this was happening to me now before such a big rowing event.”

Despite everything, Alice wears her two-and-a-half inch scars with pride, explaining: “I think they tell a story and actually I’m proud to show them because they are nothing to be ashamed of and they show that I’m someone who is committed to their sport – but just got unlucky.”