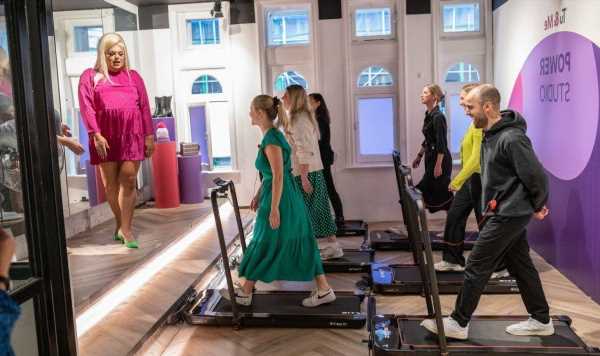 The ultimate fitting room experience, set up by Tu, also included body confidence workshops, to teach customers how to treat life like a catwalk.

It comes after a poll of 2,000 adults found nearly half (48 percent) avoid trying on clothes in changing rooms, due to the tight spaces (20 percent), and feeling insecure (15 percent).

“I want people to share how I feel as a Drag Queen, empowered and happy, strutting their own confidence with pride.

“Changing rooms can be a scary place and you need to feel good about yourself. It’s important, babes.”

The research also found two-thirds (65 percent) like to move around when trying on clothes to make sure they feel confident in them.

As a result, customers have raised their arms above their head to test for comfort (30 percent), squatted or sat down to make sure clothing isn’t too revealing (21 percent), and even danced to ensure items don’t ride up (13 percent) when trying them on.

But six in ten said standing still in a changing room often doesn’t do an outfit any justice.

Reasons for this included being unable to test out how clothes look in reality (47 percent), the lighting being different to natural light (41 percent), and struggling to understand how the items make them feel (33 percent).

When trying on garments, shoppers take an average of four minutes to decide whether to keep them or not – but people typically return 20 percent of the items they buy.

And a piece of clothing must be worn three times before knowing whether they actually like it or not.

The study also revealed 45 percent struggle with their body confidence – due to not liking the shape of their figure (42 percent), believing clothes never look like they do on the hanger (30 percent), and comparing themselves to others they see online (25 percent).

Body parts Brits worry about the most when trying on clothes are their stomach (38 percent), legs (19 percent), and bum (18 percent).

But two-thirds said feeling good in clothes improves their confidence.

Those polled, via OnePoll, believe the ideal fitting room would feature lots of space to move around in (43 percent), curtains or a door that closes tight so no one can see in (40 percent), and mirrors with different angles (36 percent).

Tu’s director of clothing, Emma Benjafield, said: “The experiment showed what a difference it can make to customers when trying on clothes and being able to move like they would in real life.

“While it was a fun event, there was also an important meaning behind it, as we know that many people struggle with body confidence, and how you feel in clothing can have a huge impact on that.

“Finding clothes that make you feel good and allow you to move with confidence is just as important as finding the right shapes, colours, and materials for you, and means you can walk out the door feeling great on the inside as well as the outside.

“It was great teaming up with Kitty to inspire people to try on clothes and see them in a different light.”