I had a great date at an indoor climbing centre in Hackney a year ago. The guy was an amazing climber!

Did you have a second date?

I was seeing him for about a year. I’m single again now.

You’re pretty sporty – why did you decide to qualify as a personal trainer and sports nutritionist?

I lost my job on Big Brother’s Bit On The Side, which I really loved, and then I broke up with my boyfriend and I was so sad. This was about five years ago, and I decided to focus on something I really enjoyed instead, which was fitness. So I did a course and set up a blog and a YouTube channel, and then the TV work picked up again.

When did you decide presenting was the job for you?

When I was seven. In our living room back home we had a black and white TV, but in our front room, that only visitors got to sit in, there was a colour TV. And on Saturdays the front room was opened to us [AJ is one of eight children] and we’d watch Live And Kicking, CD:UK, Rugrats and Bruce’s Price Is Right. I remember saying to my mum that I wanted to be in the TV.

What’s the biggest hurdle you’ve had to overcome?

The biggest obstacle when I was younger was geographical. I was living in Blackburn and the ITV and BBC studios were in London, and I thought: “How do I get there? I need to be there.” 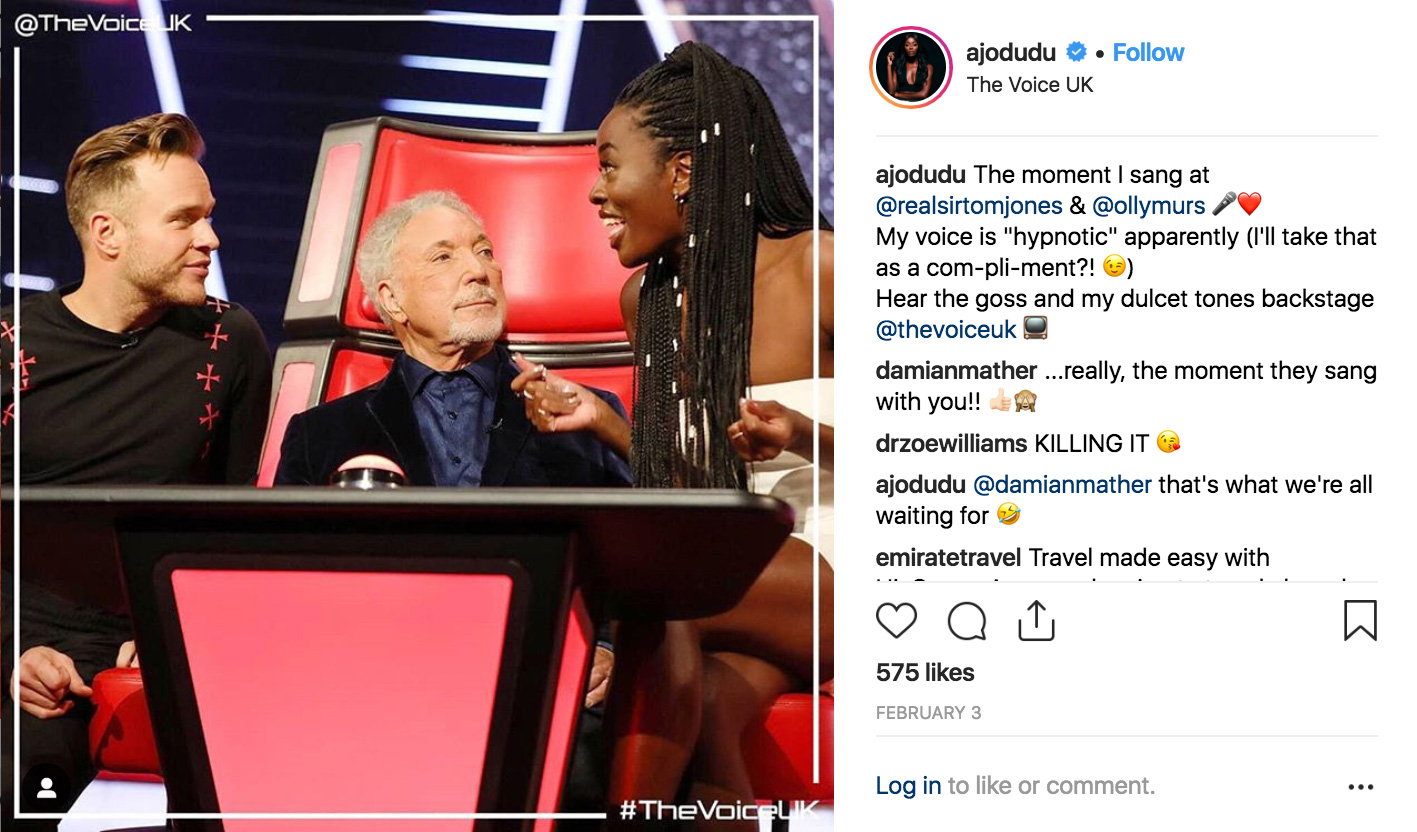 And how did you end up getting there?

When I was 10 years old, there was a competition on the CBBC page on Teletext to be on a game show called Insides Out, and the winner would get a backstage pass to the BBC. And I won!

What a pinch-me moment! There are so many highs and lows working in TV. I learnt that the hard way when my contract for Big Brother’s Bit On The Side wasn’t renewed. Nobody gave me a reason, so I felt rotten. I worked alongside Emma Willis on that show – fast-forward five years and it’s amazing to be working with her again.

How is it working with the four coaches, Sir Tom Jones, Jennifer Hudson, Olly Murs and will.i.am?

They’re great! Olly and Tom are a lot of fun. I think Jennifer has started to understand my northern accent now, which is good. Her eyes always get wider when I start talking and she literally focuses on my lips.

Did Russell Brand introduce you to your agent?

I did an interview with him. I thought it went really badly, but afterwards his assistant said he wanted to talk to me.

He had a bit of a reputation as a ladies’ man at the time, so I thought: “Here we go, I’m going to turn down Russell Brand, I’ve got a boyfriend, mate.” But actually, he said: “That was so much fun, you’re so memorable!” He asked me who my agent was and when I said I didn’t have one, he got on the phone to his. Then I signed with them!