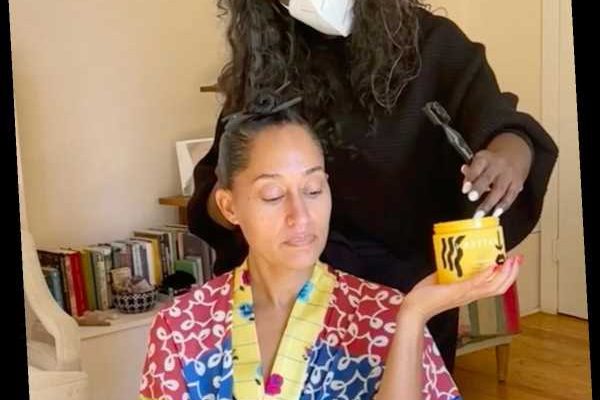 Just like with fashion, Tracee Ellis Ross is never afraid to take risks with her hair. So when she was honored with the Fashion Icon Award at the 2020 E! People's Choice Awards on Sunday night, the black-ish star made sure to go all-out.

To complement Ross' chic Schiaparelli camel-colored pantsuit (which was worn on the red carpet) and the Alexander McQueen white cape with thigh-high leather boots and Ana Khouri jewelry (which she wore on stage to accept her award), her longtime hairstylist Nai'Vasha pumped up a classic look using the star's Pattern Beauty haircare products.

“I wanted a clean, bold look that could make waves, take up space, and take flight," Ross, 48, tells PEOPLE exclusively. "Nai’Vasha took it to the next level by pulling my hair back in a long elegant braid, then creating a chic snake swirl in my hair using Pattern styling products and tools. It was classic with a twist," the actress adds.

To create Ross' waist-length braid, Nai'Vasha sectioned off her damp hair with the Pattern Beauty Hair Clips and detangled each section using the brand's Shower Brush. After drying using the T3 Cura Hair Dryer, she brushed in a quarter-size dollop of the Pattern Beauty Strong Hold Gel along the hairline and base of the ponytail and secured it with a hair tie. Once the ponytail was in place, Nai'Vasha started braiding the actress' hair all the way down. To finish off the look with a dramatic side-part, she unpinned the triangle section at the front of the head and swooped the hair into a wave shape using the Pattern Beauty Edge Tool and more Strong Hold Gel. Nai'Vasha finished Ross' hairstyle by drying it with a diffuser before she headed off to the show. When Ross accepted her Fashion Icon accolade during the ceremony (which was previously awarded to Victoria Beckham in 2018 and Gwen Stefani in 2019), she thanked her father Robert Ellis Silberstein "for his impeccable style and for being my humor twin," as well as "the icon herself," her mother Diana Ross. "Not only for her great parenting … but also her example, her sense of style, her epic closet and her glamour that introduced me to the power of fashion."

Ross recalled begging her mom as a teenager "for a seasonal shopping budget" — "spoiler alert — I did not get it" — and said she used to go on stage after the singer's performances to collect beads that fell off her sparkly dresses "so that I could have pieces of the magic, seeds of the fashion dream that I was cultivating for myself."

She also remembered that growing up, her "love of vintage clothing" helped keep her "on a budget." "Second-hand clothing helped me understand that style has nothing to do with money," Ross said. "It's the way you put things together. Style is the how, not the what."

Ross also tipped her hat to the magazine industry and the stylists she's worked with throughout her career, including Karla Welch, whom she called her "collaborator in rule-breaking." She also thanked fashion designers, saying, "Thank you for having me inhabit your sublime creations."